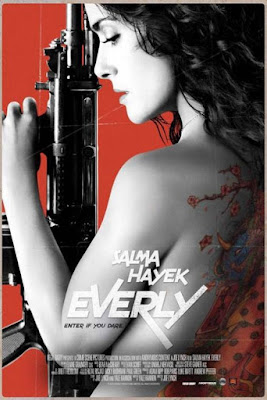 I vaguely remember this coming out this past year. I remember I'd read about it a few times in a few articles or sites, but I don't recall ever seeing a trailer or even a review. So I forgot about it. But about a week ago someone had made a comment about this film on a random Facebook post, saying that they loved it and it was a lot of fun. Since that was the one and only "word of mouth" I'd ever come across, I figured I'd give it a shot. When Redbox recently offered it, I jumped on it.

I knew nothing about this film going in, other than it starred Salma Hayek, and was directed by Joe Lynch. While I'm not entirely familiar with his output, I did see his first film, Wrong Turn 2, and loved it. So the prospect of someone who started out in horror coming to the action genre was exciting to me. It happens a lot, with action directors like Renny Harlin, John McTiernan and Stephen Hopkins all having started out in the horror genre before making it big in Hollywood with action films. It seems to be an almost natural transition, and having fallen in love with Wrong Turn 2 and it's impressive effects work, the idea of Lynch venturing into action almost seemed natural.

Holed up in a penthouse apartment as she fights off the Japanese mafia, Evelyn (Hayek) must find a way out to save her 5 year old daughter using anything she can. 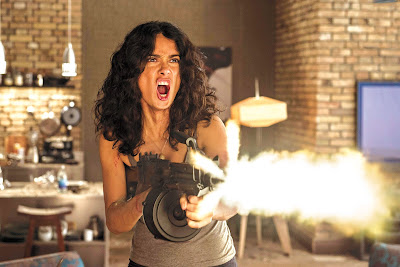 Everly was awesome; plain and simple. These days it seems to be harder and harder for action films to leave a lasting impression, yet Everly did just that, in spades. With my experience just a few days ago of watching Expendables 3 and being severely let down, Everly was an exciting breath of fresh air. Directed with gusto by Joe Lynch, it's a unique film to say the least. What I wasn't expecting was the film to take place almost entirely in a single room. I'm sure you can imagine how difficult it could be to shoot an entire film in a single room, yet keep it fresh and interesting. Even I wasn't aware of this as the concept of the film until about halfway in when I started to realize that Evelyn (Hayek), though she keeps trying, is never able to escape that penthouse. I guess I eventually would have had I done any research online beforehand, but please don't let that idea dissuade you, because somehow they make it work!

So much of this film is just spot-on, working effectively well as a balls-to-the-walls action film with an insane amount of over-the-top action and hardcore violence, yet surprisingly tense at the same time, with genuine moments of suspense. It's also slightly tongue-in-cheek, releasing some of it's hard-edge tone with some random moments of humor that also work effectively well at keeping the film from being 100% hard. The violence on display here is nothing short of awesome. What I liked most in terms of the violence was that most of it was done with practical effects. You won't see any CGI blood splatter, or CGI gunshot wounds, and believe me, there is a LOT of blood spilled in this film. When CGI was implored, it was done on an extremely minimal level, integrated into an existing shot and you'll more than likely not even notice it. 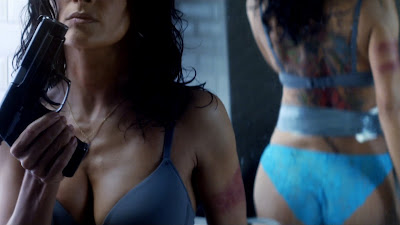 The action sequences, though contained in a limited space, rule this film. There were things in here I hadn't seen in action films before, and there were things I had, only done in a much more extreme and brutal fashion. And that's what Everly does so well. It pushes the violence, gore and action to the extreme. So much of it is so over-the-top it will surely elicit a chuckle or laugh, while at the same time shocking you. One of things I found most surprising is that most of it is quite clever on a visual and creative level.

Joe Lynch is a revelation here. Going in, and knowing how he shot Wrong Turn 2, I expected the same visual aesthetic, imploring a lot of handheld freestyle camerawork with a kinetic approach. But here, he takes a much more streamlined approach, and it's gorgeous. I can't remember a single handheld shot, sticking entirely with tracking and stable shots. The visuals here are just stunning, imploring some creative camerawork that you'd come to expect from a seasoned pro, and not someone with only 2 other films under his belt, and none of them in the action genre. Though an entirely different aesthetic than Desperado, I found this film to  have a lot in common with Robert Rodriguez's first big budget film in that it was clever, creative, nonstop fun, and shot with passion.

Despite it's seemingly neverending barrage of all-out voilence, Everly took many detours into places I was not expecting, such as the Japanese Mafia angle, and a character who shows up in the last act known as The Sadist. I almost feel like they could have made an entire film out of his character alone. But these are things that only add to it's unpredictability, something sorely missing from action films these days. 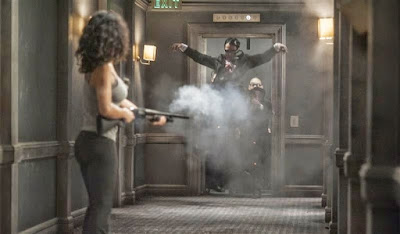 I'm sure through it's process of funding, casting and pre-production, Everly must have gone through several casting changes, as is usually the case. But Hayek, whether she was the first choice or not, nails the part of Everly, and honestly, I've never seen her being as badass as she is here. She kills it, playing both sexy as hell, and lethal with an attitude.

I wish films like this got more attention. In this day and age where action films seem to cater to the older crowd by casting Liam Neeson, or only marginally dip into the action genre by giving us cookie-cuter thrills in an age filled with remakes, reboots and re-imaginings, it's refreshing to see something with balls, and rated a Hard R.

Within the past few days, I've seen 2 films that have shown me everything right (Everly), and everything wrong (Expendables 3) with the action genre today. Everly gets everything right, and not only pushes it further, but kicks your ass in the process.
Posted by robotGEEK at 2:14 PM