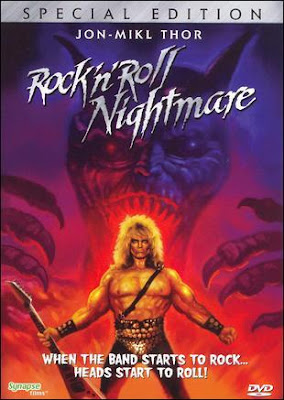 Oh man. Where do I begin. Being a fan of Bad Movies, I came across an article somewhere that had compiled a list of movies so bad that they were good, and if you were a lover of this particular little niche of bad filmmaking, that you needed to see these hidden gems. Rock n Roll Nightmare was on this list somewhere, so I looked up the trailer and was sold.

A heavy metal group has just arrived at a house in a small town. Set up by their manager so that they could get away from the distractions of the big city, the intent is to practice and record for their upcoming album. Soon after moving in strange things begin happening, and they soon discover something evil may be lurking in the house.

If you're not in the know, here's a bit of backstory. Jon-Mikl Thor is a real life bodybuilding rock n roll musician from Canada who goes by the name of Thor, obviously not to be confused by the Marvel character, though he does look the part. While he's never struck it big like other hair bands in the 80's (the highlight of his career), he does have a pretty big cult following. He's also passionate about movies, so he decided to write/produce/score/star in his own horror film called Rock n Roll Nightmare in 1987, with the help of ultra low-budget director John Fasano (Black Roses), and the results speak for themselves.

Rock n Roll Nightmare aka The Edge of Hell is bad. I'm a guy who loves bad movies, and when a movie is so bad that it's actually entertaining in a fun way, it instantly falls into the "So Bad, It's Good" category - a category I happen to love. But then there are films like this, that are just awful, and not in any redeemable way. Most of this film is so terrible on every level that with the exception of a chuckle and eye roll here and there, it's pretty boring stuff. While the script is nowhere near good, or decent for that matter, a lot of the fault lies squarely on director John Fasano's shoulders. He's terrible. So much of the "bad" that we see on a visual level goes back to Fasano, and with an endless barrage of uneven edits, weird camera angles, awkwardly long takes, hilarious transitions, and just plain awful directing, there's plenty to rip into. So the film may not be good period, but a good 95% of it's problems come from a technical level. Depending on your definition of "entertaining bad", these issues might make for a better experience for you.

Another odd staple in this are the seemingly endless love-making sequences. There are so many random and totally unnecessary sex scenes that I was warned ahead of time that it almost qualified as soft porn, only there's hardly any real nudity. It's shot in such a weird way that while you know exactly what they're doing, they don't really show any real nudity. Maybe a nipple might make a quick 2 second appearance, but for the most part, you really only see some half-covered side-boob action. So it's really strange that there are so many sequences like this in here that run on waaaay too long. My guess is that they were trying to expand the run time, nothing more. There's definitely something wrong when there are a lot of random sex scenes and you're bored to tears. 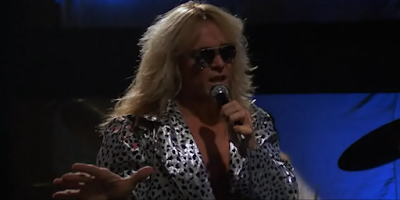 It's hard to gauge exactly what Thor had initially envisioned with this passion project, because in interviews from 2005, nearly 20 years after the release of this film, he talks very fondly and proudly of his experience making this film. There's no mistaking that he's proud and confident with the film, but should he be? It's so incredibly schlocky at every turn, with hilariously low-grade makeup and effects that no person in their right mind would ever mistake them for real. It's almost as if they bought all their masks, props and makeup effects from the local 99 Cent sore, only they didn't. Someone actually went through great pains to create a lot of these by hand, and when you see the final product, you wonder why they even bothered when going to the Dollar store would have been just as good. In interviews it's clear he has a love for campy B-Movies, but it's never mentioned whether this film turned out that way on purpose or by accident.

But Rock n Roll Nightmare isn't a total loss. Thor, to his credit, really, really tries here and for the most part, sells the shit out of it. He's not a great actor, but he's not the worst either. He's easily the best of the bunch in the group, and you have to admire the guy. He's in the thick of this pile of shit and he keeps a straight face, even when battling small rubber monsters being thrown at him from off camera and pretending to fight them off in slow-mo when in reality, he's actually holding onto them so they don't fall off since they didn't have any money for suction cups or any kind of sticky substance to make them actually stick to his body. Ah, the joy of low-budget filmmaking.

But while you sit through this odd little horror film for over an hour wondering if the last act will somehow pay off in the end, rest assured, it does. The ending alone is well worth the effort of sitting through this tedious experience. I remember while we were watching this the other day, and the most common comments we kept making were "Wow, this is terrible", "This is kind of boring", and "I've gone this far, I have to see it through to the end now". Boy am I glad we did, because what a doozy of an ending it is. I won't spoil it for you, but as things began to unfold, we both simultaneously blurted out "Whaaaaat the fuuuuuck???". Yea, it's that bizarre, insane, and utterly brilliant in a "WTF were they thinking?" kind of way.

Overall it's an okay "Bad" horror film that will certainly deliver a few laughs, chuckles, smirks and a few grumblings. While not quite up to par with films I generally show on Bad Movie Night (too boring for it's own good), the ending is well worth the trip. Thor is really a better actor than you'd expect, and his bravery (again, the ending) should be commended. I wouldn't say this is worth a purchase, but if you can rent it someplace via Netflix, Amazon or your local video store, I highly recommend doing checking this out.
Posted by robotGEEK at 4:15 PM