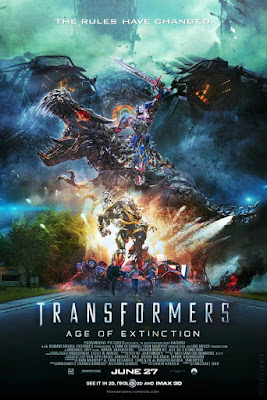 I'll be right up front, I loathe these Transformers movies. I've never been a fan of Michael Bay as a director, and I've hated what he's done to this franchise. I hate how he shoots these films. I hate the design of the Transformers. I hate that you can't tell what the fuck is going on three quarters of the time because of his ADD style of filmmaking. This list could go on and on because while I do have a young son, I have been forced to endure these shitty movies made to sell toys more than anything. And you know what? Making movies to sell toys is fine, it's nothing new, but from the beginning, I have not liked how this property has been handled. Every time a new Transformers film is completed, Bay "always" states that this is his last one, yet he keeps changing his mind and keeps making more, and I get more and more disappointed with the franchise, the studio, and the director himself.

But a funny thing happened. When my son suggested watching this, as there are fewer and fewer movies we can enjoy together, I figured what the hell. While none of the previous films in this franchise would be considered anything but popcorn entertainment, this last entry was so batshit insane, so utterly ridiculous, with so many WTF? moments that I actually found myself enjoying this shockingly entertaining piece of rubbish. Yes folks, I enjoyed Age of Extinction, or a Transformers film rather, for the reasons that make it unintentionally terrible.

Much like AVP: Requiem, this latest entry in the series just seems to go a completely radical direction. Maybe to go out with a bang, or maybe as a big "fuck you" to the critics, Bay seemed to throw any sense of logic out the window and literally throw as much insane action and spectacle as possible at the screen, often times with so much of it serving no real purpose to further the story along. In fact, I'm not really sure why the second half of the film needed to take place in Japan. I'm sure it's mentioned, but for the life of me, I can't remember how or why. And that's what happens a lot in this entry. A lot of things happen, and most of it is so crazy and batshit insane, that you sort of just give up trying to figure out the "how" or the "why" that you just ease up on that mindset and enjoy the ride, and what a ride it is. "Let's go out with a bang" seems to be the motto and driving force behind this one.

While I still have a hard time liking the design of the Autobots and Decepticons, what I did enjoy was the fact that Michael Bay, because of the use of 3D cameras, was forced to keep the fucking camera still for once, resulting in some of the best visuals he's had to offer since The Rock. No joke. I found myself consistently in awe of how gorgeous his shots were, his compositions, and how fluidly the visuals flowed with 99% of his camerawork being pretty impressive. Meaning, no shaky-cam. Finally! If you know me, you'll know my extreme HATE for Bay's specific style of filmmaking. It seemed that with every successive Transformers film, it only got worse. And when he finally had a chance to prove himself as a talented filmmaker with Pain & Gain, a film completely outside of the Transformers universe that he's immersed himself in for the last 10 years, he only seemed to take that opportunity to go drastically further in the shaky-cam department that it literally ruined the experience for me, which is a shame, because it had the potential to be a pretty fun film. Instead it was an infuriatingly nausea-inducing experience. Thanks for proving once again that you were at one time a visually impressive filmmaker Mr. Bay, but sadly those days are long behind you.

Enter 3D camera's. For the record, I guess I don't really know if it's solely the fact that he used these monstrously heavy 3D camera's that we finally got some "stable" camerawork out of him - something he hadn't done since 2005's The Island, a good 10 years ago. For all I know, it could have been a conscious decision on his part to finally execute some of that slick camerawork that he became known for in his music video days. I'd like to think so. Whatever the reason, it was honestly a breath of fresh air, and made the experience of watching a Michael Bay movie a decent one once again.

To this day, I couldn't tell you what Age of Extinction was all about. All I keep thinking about is the insanely outlandish and ridiculous action sequences that never seemed to stop, in the most bizarre locations you'd never expect. The story and action fly at you at such a furious pace that there's little room for exposition. So much so that there's a scene halfway in the film where a small Transformer basically lays out what's going on and why in the matter of 2 minutes to the band of human characters helping them out. It was an odd scene, and takes you somewhat out of the film, yet it's important, because you learn what's been going on in the timeframe of the last 2 films and why this and that is happening. He even goes on to explain how Megatron is now Galvatron and why. A little silly, but also very important for the casual viewer.

I've since learned more Transformers films will be coming, but different, as the studio is looking to overhaul the franchise in a new direction, without Michael Bay at the helm. That idea gets me really excited, as I hope and dream that they will in some way go back to the franchise's roots, which started with my beloved 80's cartoon. I would love to see a film that more resembles the franchise I grew to love as an 80's kid, and not the Manga looking version we've had since 2007. In the meantime, this film is undoubtedly my favorite of the "Bay Universe", and while it seemed to have gotten slaughtered by critics more than any other in the series, I found it in the least, entertaining in a "WTF? am I watching" sort of way.
Posted by robotGEEK at 3:14 PM