Review: We Are Still Here 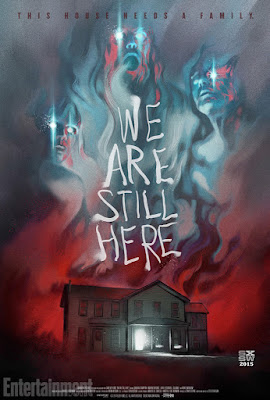 Yet again, we've come across another little known horror film that seemed to have flown under the radar, barely scratching the surface of popular public opinion. It's such a crying shame really, because films like It Follows, Starry Eyes, and now this film are pretty much some of the best horror films you will see all year, and they are not playing in your local cinema.

Much like It Follows and Starry Eyes, it was through social media that I even became aware of this. Apparently it had premiered at SXSW to glowing reviews, but outside of that, I hadn't heard or seen anything about it, other than the random blurb from some lucky son of a bitch who was able to catch it at a specialty theater somewhere. Every word-of-mouth was strongly positive, and when I saw Amazon was finally offering it on their streaming site, I invited a bunch of friends over for an impromptu movie night with none of them knowing "anything" about this, other than me telling them it's a throwback to 70's horror and it's a ghost story.

What followed was an hour and a half of some of the best independent filmmaking we've seen in a really long time. Essentially a ghost story set in an old house that has just been bought by an older couple who recently lost their adult son in an accident, and hoping to get away from the constant memories of him, they soon learn of the "history" of the house from a neighbor, and then things really start becoming painfully apparent.

There is so much to admire with this film. I personally made it a point to not learn too much going in, so as with the group, I went in virtually cold, and our film experience was all the better for it. But even with what we already knew, which was that it was a ghost story and was set in the 70's, you are kind of taken aback by how ingenious it all is. There's nothing new in here, and certainly nothing that we haven't already seen before, yet writer/director Ted Geoghegan crafts We Are Still Here with so much love, talent, and passion for euro 70's horror that it's damn near impossible to not be impressed. It's Geoghegan's admirable craftsmanship that sets this film apart from so many others in the same genre, and what ultimately makes it so much better than any big budget Hollywood horror remake, reboot, or run-of-the-mill atrocity starring actors (using the term loosely) that look more like models rather than real human beings.

To his credit, Ted Geoghegan has casted this thing perfectly. Barbara Crampton (Re-Animator, From Beyond, You're Next) is exceptionally cast as the grieving mother who wants to move on, yet still finds anything to grasp onto that even remotely reminds her of her son. To be honest, the casting all around was pretty spot on in my opinion. With a small ensemble of principal players, the roles all seemed tailored to their individual strengths. Rounding out the impressive performances were none other than Larry Fessenden and Lisa Marie, solid fixtures in the horror and indie film world.

As with any horror film, you have to expect some effects work, and believe me, there are quite a few special effects to admire in here. It can be hard to come up with new and inventive ways to tell a ghost story. I mean, by now, we've seen it all, and when we're not getting unnecessary remakes of classic ghost story films (Ahem.....Poltergeist), then we're treated to inferior films that look like they should be playing on the Syfy channel rather than you local cinema. But with We Are Still Here, we're treated to something new, something fresh, and an ingenious spin on the ghost story genre. It was creative, with some elements I hadn't seen before, and done so damn well. And as far as effects work goes, brilliant. Just fucking brilliant and top notch quality work.

One of the best things about this film is that not once do you ever feel like you're watching an independent film. Not once. So much sheer talent is on display in every facet of this films creative team, as well as it's production, that when it's over, one of the first things you'll most certainly be asking yourself is why didn't this get a full-on theatrical run and play at your local cinema? Everything in here is deliberate, and calculated with it's slow-burn approach to it's stunning climax. Horror films these days could learn a thing or two from Ted Geoghegan and his enthralling little film.
Posted by robotGEEK at 1:55 PM