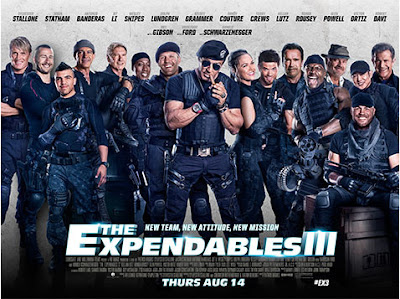 Watching this 3rd installment in the Expendables franchise reminded me why I don't like this franchise in the first place. Here is a franchise that touts itself as being a "throwback" to the Golden Age of action films, the 80's. So naturally, I was excited about this project....initially. I mean, I grew up on this stuff as a teenager in the 1980's. While my brother was solid into horror, I was always more of an action guy. So the thought of seeing all my favorites from films like Rambo, Commando, Die Hard and so on all in one film kicking all kinds of ass the old-school way got me super pumped. Then I saw that first film, and while I did enjoy it to a degree, I didn't like it as much as I had hoped I would. There were a lot of reasons for that, but I'll get into that later. But I figured, maybe it was just a fluke, and the inevitable sequel would fix all that.

When they announced that Simon West would be taking over as director, I got excited again. Hey, Con-Air may be silly, but it's a helluva lot of fun, and such a gorgeous film to look at. And then they went ahead and threw in more big names like Chuck Norris (who looks like he's in a totally different movie) and Van Damme into the mix, and I could hardly contain myself. But then the film came out, and even with all this new talent attached, it felt shockingly more dull and flat than the first! It didn't do anywhere near the business it should have, yet somehow a 3rd film was greenlit.

When this 3rd film was announced, they brought on yet a new director in the form of Patrick Hughes, this time from the indie world, who had impressed Stallone so much with his previous film, Red Hill, that he felt he was the right man for the job. Again, "more" names were attached like Kelsey Grammer, Wesley Snipes, Harrison Ford, Mel Gibson, and a slew of fresh "young" newbies. I admit, the trailer looked promising. The visuals were more streamlined, and the vibe and action seemed more pumped up, in the trailer anyway. But then reviews started pouring out, and none of them were good. And then the film came out and bombed bigger than the previous entries, making only a quarter of it's production costs, most likely due to a massive leak 3 weeks before it's scheduled release when it was momentarily available online, and subsequently downloaded nearly 200,000 times. None of this got me excited enough to shell out $10 to go see it in a theater. So I waited.

My problem with this film is the same issue, or issues rather, that I have with the entire series in general. While it's fun to see all my favorite action hero's from a time when action ruled the screens, the fact is that the scripts are just mediocre at best, and sometimes too convoluted. While the first film was the simplest in the bunch, the other two got more and more extravagant, when they didn't need to be. The insanely large cast is another issue. It's weird to say, but there's just too many of them, and none of them get the adequate screen time they deserve, or need for you to invest in their characters. Half the time you forget some of them are even in there until they pop up again later in the film. Case in point, I totally forgot Jet Li was even in the group. He didn't show up until at least halfway through the film, and I think his screen time is less than 5 minutes total. Same thing with Antonio Banderas. For my money, I would figure that focusing on just a handful of characters, possibly less, would make for a much better film rather than bombarding us with an endless barrage of familiar faces.

One of my biggest issues with this franchise is that it's just not targeting the audience it intends to properly. Nothing about these films scream "throwback", and none of them look it either, starting with the marketing. It's all wrong. What happened to hand-painted posters? That's what needs to be the selling point for these. The big names are what get you interested, but it's the hand-painted badass poster art from decades ago that would be the thing people remembered the most about these kinds of films. Instead what we get is a picture of all of them standing there. Whoopti-fucking-do. Take for example the poster art for The Annihilators (--->>), a low-budget action film from the 80's. It's a terrible and boring film, but man that poster rocks! I'm not even a fan of the font they use for the title. Everything about these films emit "new" and "cookie-cuter", when they should instead be reminding you that there was a time when action films were actually badass, and cut from the same cloth. None of that here...sadly. These "throwback" films seem to be more and more a ghost in the industry. But every once in a while, one sneaks up on us, and reminds me that they still can make these types of films. 2 Guns was that film for me, starring Denzel Washington and Mark Wahlberg. I don't know if it was intentional or not, but that movie was fun, made with an old school vibe, had lots of action, didn't rely on CGI, and was occasionally funny. It reminded me of the type of action film we used to enjoy.

What I noticed with all 3 films is that while there is indeed action, none of it is very exciting. I will admit the first film fared better than the 2 sequels, partly because it was more of a stripped-down approach, but all in all, you get sequences of action, meaning lots of shooting and lots of explosions, but it's all rather uneventful. And you kind of expect a LOT MORE in the action department. And you sure as hell expect much cooler stunt-work in general. I mean, practical stunts are a staple of the genre.

This entire post is essentially me complaining about the entire franchise, from the muddled plots, to the lame poster art, to the uninspired font. But I think one of the biggest problems I have with these films overall is the constant overuse of CGI for everything. It's maddening! What happened to old fashioned squibs? What happened to bullet wounds and gunshots looking organic? No matter how  hard they try, no matter how far we advance in technology, CGI blood is no comparison to old-fashioned squib work when you can actually see blood packets exploding. If anything gives you the feeling of a way action films were made back in the day, that will do it. But did they do that? Of course not. Not in any of the films. Furthermore, the annoyingly overuse of CGI in general is enough to turn most people off. I'm talking about just regular shots of helicopters flying, or worse yet, explosions. I can go on and on, because the abundant cheap-looking CGI effects work will drive you nuts. You keep asking yourself "why don't they make the films the way they used to if it's supposed to be in the same style?".

The Expendables films are a huge missed opportunity.
Posted by robotGEEK at 2:13 PM