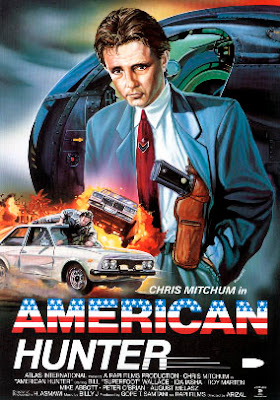 In my constant quest to find obscure bad movies that defy logic and to most of the world's shock, become quite entertaining in their attempt at serious filmmaking, I often come back to Indonesian filmmaker Arizal. If you don't already know, he's the guy responsible for the amazing Final Score, and the totally bizarre and batshit crazy The Stabilizer. So when I'm hunting, digging, and searching for that WTF? obscure action flick that defies explanation, I tend to always come back to this action director's filmography.

I've known about this film for quite a while, but it never got the reputation his other films got, even though he was reteaming with Chris Mitchum, the star of his masterpiece Final Score. But the other day I finally decided to seek this one out, hoping for something that could measure up, even slightly, to Arizal's other classics.

Jake Carver (Mitchum) is a bad guy hunter, or something like that, who travels to Indonesia to track down the guys who stole a microfish, or microfilm, that contains information that will send Wall Street in turmoil. Also on the hunt for this microfilm is a bad guy by the name of Adam, also living in Indonesia, who will stop at nothing to get it.

While American Hunter doesn't reach the level of absurd that made The Stabilizer and Final Score so memorable, as an action film where the laws of gravity or logic apply, it's a really fun experience. It's probably my own fault I wasn't blown away by this. I mean, it really is hard to top Final Score, and with The Stabilizer, as silly and ridiculous as it was, that also didn't nail it for me the way FS did. So I guess I had high hopes with this one, especially considering he was going at it again with the great Chris Mitchum. Unfortunately, there wasn't much in the way of WTF? excitement for me. The action was great, and the fight scenes flat-out absurd, yet there was nothing all that memorable in this. At least, not in the way you come to expect from this team.

In fact, as I try to look back on it, which was just literally a few days ago, I can hardly remember a thing about it, other than a very few key ridiculous moments that stood out. So all in all, it's a very tame experience compared to their other efforts. But that doesn't make it any less awesome. Sure it's full of awful dubbing, painfully slow car chases (which equal hilarious), awkward characters, WTF? moments that surely weren't done on purpose, and highly ridiculous scenes of Chris Mitchum attempting martial arts when it's painfully clear he doesn't actually know it, but it's just more straight-forward than you'd expect I guess, and less memorable overall.

It's a fun flick, there's no doubt about that, and far better than most you'll find in this little niche of bad movies. But I was left feeling a tad underwhelmed, and though great and fun, American Hunter wasn't quite as bonkers as I was hoping for.
Posted by robotGEEK at 1:01 PM