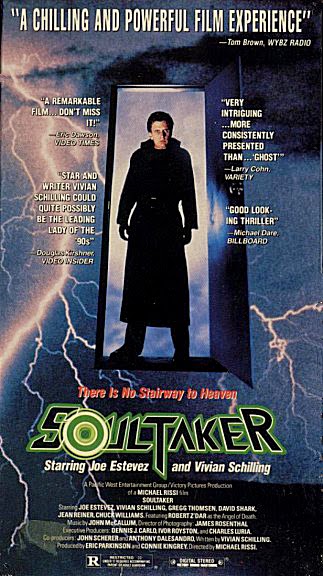 This was a film I'd known about for years, having come across it many, many times browsing VHS tapes from various sites. The cool cover art always stuck out to me, as well as the glowing reviews by no-named critics plastered all over the front. But I never took the time to actually track my own copy down. Then a friend who participates in our Bad Movie Nights wanted to screen it for our group, as it was a film he quite enjoyed for it's awfulness. Since I had been wanting to see it anyway, and also knowing Mystery Science Theater did a very popular episode of this, I was game. What followed was one of the most excruciating film experiences I've ever had.

Soultaker is bad, and not in a so bad it's good kind of way. It's just flat out terrible. I'm still not entirely sure what the premise was supposed to be, or even what genre this was supposed to fall under, but I can assure you, none of that matters, because you'll be bored to tears by this shockingly bland and uninteresting piece of celluloid.

At times giving us hints of sci-fi, and other times touches of horror, the only real genre I think that would define this would be drama, because a whole lot of nothing happens for such a drastically long time that you find yourself looking at the clock hoping that more time has gone by than you think, just so the experience can be over and done with.

I'm not even going to bother with much more than that, as any attempt at actually trying to watch this movie is an exercise in futility. Trust me, you've got better ways to spend an hour and a half than with this mess. While the whole point of watching Bad Movies on Bad Movie Night is to laugh, yell and hurl insults at the tv screen, which we love to do, this was the rare exception, because there was nothing to make fun of. It's soulless, boring, and below mediocre in the worst way possible. I think my friend said it perfectly when the film was over. When the film was over, my buddy leans over and says "Dude, that was just absolutely terrible". I couldn't have said it better myself.
Posted by robotGEEK at 8:15 AM