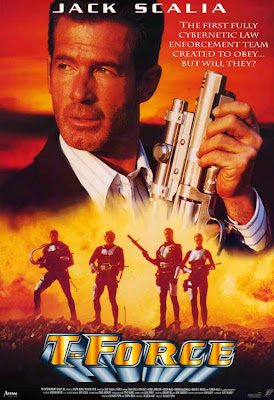 Director Richard Pepin is quickly becoming one of my all-time favorite action directors. With just the two films I've seen of his already, he reminds me of an Albert Pyun on his best day. The Albert Pyun who gave us action cult classics like Cyborg and Nemesis. A low-budget action director who's firing on all cylinders, who's able to give us what we want. What is that exactly? For die-hard action fans, that's just nonstop insane over-the-top action and stunts, not to mention a seemingly endless supply of explosions at any given moment. After being blown away by the insanely "better than you expect it to be" Hologram Man, I set out to find as many of his other DTV efforts as I could, in the hopes that Hologram Man wasn't a fluke. Guess what? It wasn't. First up, T-Force.

So, the most promising one, The Silencers, has been ordered and on it's way. But I then learned that T-Force was available on YouTube, and chose this as my Saturday night film, and let me tell you, T-Force did not disappoint. Just like with Hologram Man, the action starts right from the beginning and does not let up. Immediately you're treated to something that can only be described as a mish-mash of Die Hard and the Terminator, and that's just in the first 20 minutes! Then they throw in elements of Cyborg, Blade Runner and even some Under Siege for good measure. But it's all done in the best possible way. Much like I had during Hologram Man, I had a smile across my face the entire time.

When a group of cybernaught police officer's, known as T-Force, revolt and go rogue, Lt. Jack Floyd teams up with the sole remaining Cybernaught who's on the right side of the law to track them down and bring them to justice.

I really can't praise this film enough in terms of entertainment value. T-Force has everything you could possibly want in an action film. Director Richard Pepin executes these enormous action sequences with such precision, that I find it shocking that he never made it as an action director in big budget studio films. He's like the Craig R. Baxely of the 90's, after Baxely stopped directing action films after his triple trifecta with Action Jackson, I Come in Peace, and Stone Cold. He must have a pyrotechnics expert always by his side because the amount of explosions in the two films I've already seen are nuts! How they were able to pull most of this off blows my mind. Not only in terms of the insane amount of pyrotechnics work, but even going into the stuntwork.

There is nothing new or inventive in this film, or with any of his films as I'm sure I will discover. Yet, I didn't expect there to be. It's a direct-to-video film marketed to the action genre, with some sci-fi elements thrown in. We don't go into these kinds of films expecting them to change the genre, or reinvent the wheel, so when I see reviews from others basically saying things like "It is what it is, no more no less", or "It does it's job", it drives me nuts. Just what did you go in expecting exactly? Personally, I want good action, well choreographed sequences, gun battles, practical effects work, stunts, and a whole lot of explosions. Maybe even some cheese factor, just for that little bit of extra awesome. On all these fronts, T-Force delivers and then some. Not only that, the hodge-podge of other well known action films only made the experience better! But wait, they don't stop there! They also decide to throw in the mis-matched cop/buddy scenario, to great effect. I honestly couldn't have asked for anything more and I loved the shit out of this film. Every single minute of it.

Despite what most of the negative reviews have to say about this, this is exactly the type of film that delivers if you're in the mood for cheesy, low-budget well-made action with tons of action and explosions. It really doesn't get any better than this. I think the fact that it steals so many elements from so many big name Hollywood action films, sometimes specific scenes and sequences (you'll know which ones I'm referring to) altogether, only adds to it's cheesy charm. While low-budget technically, it doesn't take away from anything, so don't let it. It's a balls-to-the-wall thrill ride with enough charm, action, explosions, fights, shootouts, and a mind-numbing thrill-a-second pace that easily makes this one of the most enjoyable action films I've seen in a long time.
Posted by robotGEEK at 6:52 AM