Review: Eye of the Tiger 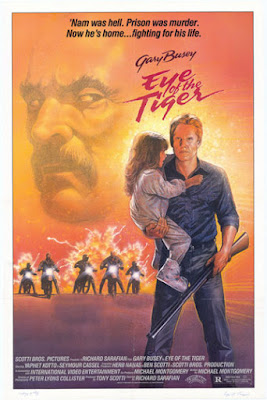 I had always been intrigued by this film. During my many browsing sessions, I'd seen it constantly pop up in my feed on Netflix for a really long time. It popped up so often that I just went ahead and added it to my list. But of course, as is always the case, when I finally decided to sit down and actually watch it, they took it off. I was able to grab this as part of an Action 4 Pack from Shout! Factory for under $5, so I figured what the hell? I have no excuse now.

You know, this wasn't a great movie, but it wasn't a bad one either. It's just kind of there. Gary Busey was a total badass, and though I'm used to seeing him as a villain, or a supporting character in bigger films, I thought he did a fantastic job as the action hero in this one, playing a guy who is just released from prison for being a troublemaker, only to end up pissing off the wrong guys - in this case a biker gang - and who now finds himself fighting back instead of being the rebel rouser he once was.

What Eye of the Tiger does have going for it, other than Busey's badass performance, is a lot of style for such a small film with little substance. While it seems that director Richard C. Sarafian has worked primarily in television, and a few small scale Direct-To-Video flicks, his use of the camera in this particular film is impressive. Eye of the Tiger is pretty standard paint-by-numbers stuff, but aesthetically, it looks like it could easily have played at your local cinema.


One of the things I found frustrating about this is that the film does indeed have moments of action and surprisingly hard violence, but those scenes are few and far between and not nearly enough to live up to that badass poster art, or the expectations you've built up in your head based on said poster art. It always feels like there should be more; if anything to liven up the story a bit. It's a shame too, because when some of those scenes do come around, it always seemed to catch me off guard in how brutal and surprisingly violent they are in their out-of-left-field approach. Most of the action is saved for the last 20 minutes, and it's pretty awesome in an all-out action set piece, making it the highlight of the film.

There's nothing in Eye of the Tiger that particularly stands out, other than the randomness of seeing Busey as the action hero lead, but it's a good watch if you're in the mood for some old school 80's revenge shot surprisingly well. The bottom line is that for a film about Gary Busey taking on a biker gang, it should be more awesome and way more exciting, but ultimately it's not a bad way to spend an hour and a half of your time.
Posted by robotGEEK at 1:55 PM