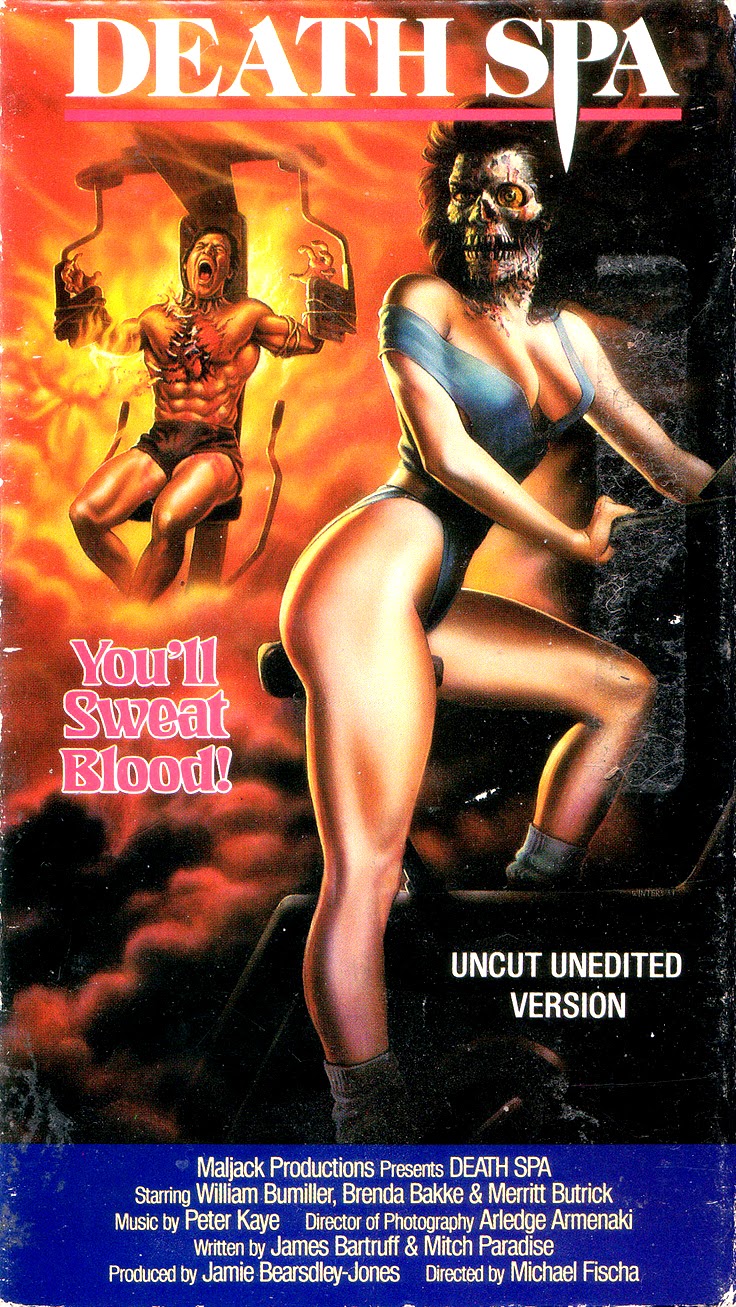 You gotta love the 80's. It really was the best decade. So much of almost everything today is somehow influenced by that decade. Hell, there's even a resurgence in old fashioned 80's synth scores happening right now. I love it! But when it comes to horror films of the 80's, just as with any particular decade, they usually tend to fall under several different camps; cheesy horror, stylish horror, or bad horror. Every so often though there is one that easily fits under all of these categories, and thankfully Death Spa is one of those gems.

I didn't know a lot about Death Spa going in, just that it had a nice little cult following. In fact, I actually had never even heard of it until this past year when Gorgon Video released a snazzy new DVD/Blu ray combo to the market, thus re-igniting peoples passion for this hidden gem. It's 80's, it's called Death Spa, and it's a horror movie. Sold! And you know, just with those ingredients alone, this easily could turn into a disaster. So did it?

Thankfully, a big fat NO. Death Spa was everything I hoped it would be and then some. It does almost everything right in creating one of the most entertainingly cheesy examples of 80's horror at maximum level. There is just so much to enjoy about this that it's hard to know where to even start. Released in 1989, you'd think this was actually made somewhere in the mid-80's because everything is screaming the 80's at it's tackiest. In fact, it's almost as if the production design went purposely over the top with the bright neon colored set, clothes and pretty much everything else. Only.....they didn't. Apparently the late 80's were an interesting time. At least, according to this film as it almost screams 80's a la Miami Vice.

The spirit of a local spa owner's dead wife begins wrecking havoc on the gym's clients and faculty. Is she out for revenge? 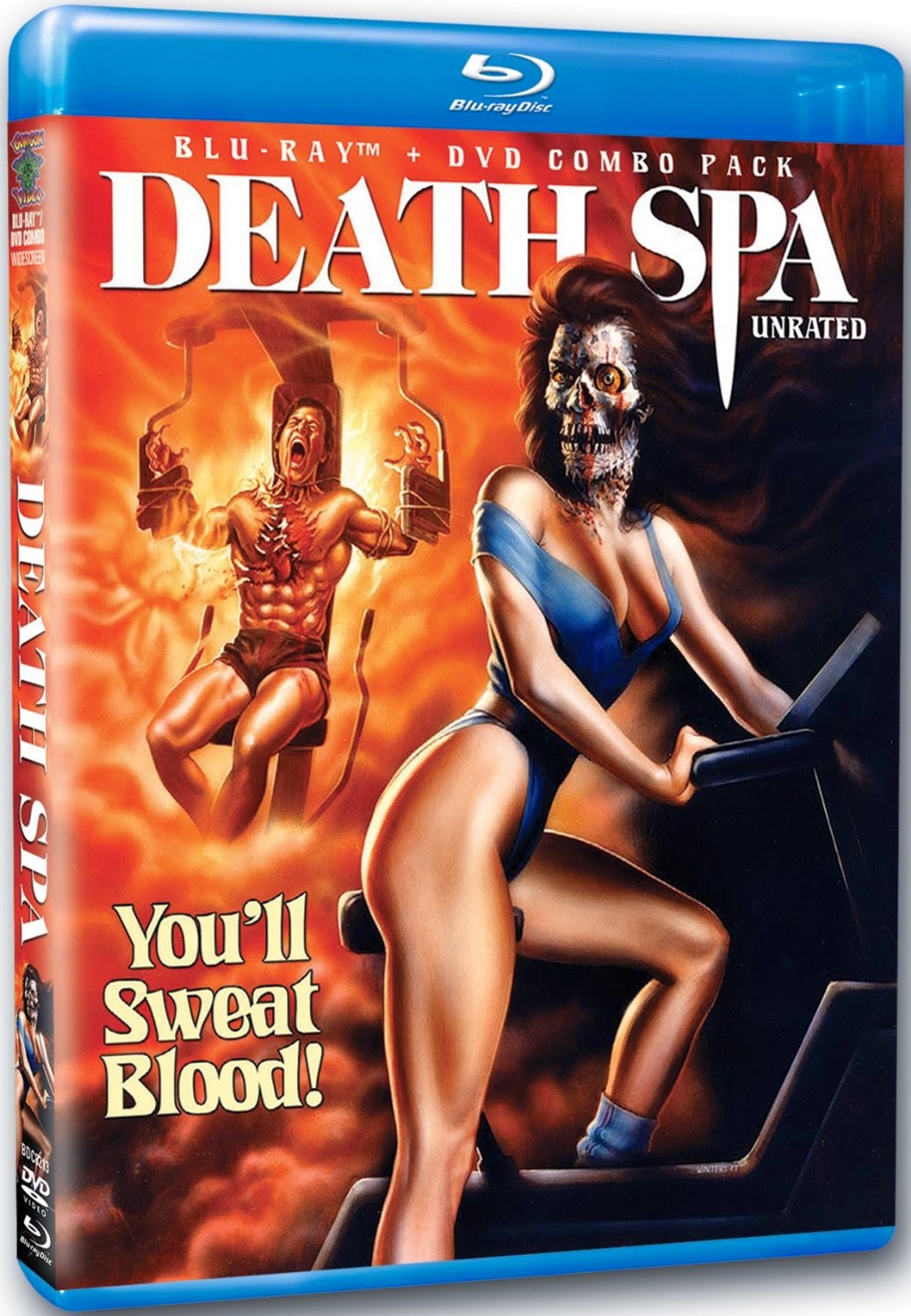 There is so much to admire about this obscure little gem. While low-budget on a technical level,
there's enough talent both in front of and behind the camera that you'd never know it. Death Spa, for all intents and purposes, should have gotten a much bigger release, most notably theatrical. I'm not sure why it didn't, because it's honestly a helluva lot more fun and well-put together than turds like......A Nightmare on Elm St. 5, Friday the 13th 5, or pretty much any Halloween film after Part 4. Yet, sadly, we were denied this enjoyment and it's a crying shame. It has everything that makes a horror film great, and most importantly, it delivers on all levels. It's fun, it's cheesy, it's gory, it's well made, and most importantly, entertaining as hell. There is nothing amateurish about this at all, and I'm glad it's finally getting the recognition it deserves.

Of course, it's not a perfect film. There are a few choices I could nitpick to death like some of the editing, or some of the directors shots, but they're very minimal and take nothing away from your enjoyment. Overall, it's an almost masterpiece of cheesy 80's horror and immediately falls under that perfect little niche of 80's horror films like Trick or Treat and Chopping Mall; fun, nostalgic, cheesy to the max 80's horror. In fact, I think that'll be a new sub-genre I will create when categorizing certain films.

Its a crime that this film never got the wide recognition it deserved. It's a much better film than you'd ever expect it to be, and a far more entertaining one than most of the low-brow stuff being released around the same time. The best part is that this has a total re-watchability factor. I can easily see myself throwing this on for some friends on Movie Night and everyone enjoying the hell out of it. Do yourself a favor and get yourself a copy of this if you've never seen it. Don't be scared off with a blind buy. Trust me, you'll love it and you'll keep it.
Posted by robotGEEK at 7:43 PM