After the amazing Final Score blew me away, I felt it only necessary to do a little more research on this director known as Arizal. I soon discovered that the guy is pretty prolific, with only a handful of films being made in English, or starring a Caucasian actor. With the few that were readily available at my disposal, The Stabilizer seemed like the most logical choice. Every single review on any site I went to gave it rave reviews in terms of how silly, hilarious and enjoyable it was in a Bad Movie Night kind of way. I was immediately sold, and thankfully, and somewhat shockingly, Troma has released this officially under their banner on DVD, so it's easy to buy on eBay or Amazon for a decent price.

The Stabilizer is the epitome of Bad Movie Night. This film was so incredibly odd, hilarious, crazy, and running at a mile-a-minute pace that it never once felt tiresome. While it doesn't contain the level of WTF? action sequences that Arizal filled Final Score with, the action is pretty much nonstop throughout. Though it's all rather impressive, with some of it being just downright insane at times, even with a poor stuntman looking like he could have possibly died or broken his back, the sequences never get to the level of absurd I was hoping for. But that's not such a bad thing, because the film itself is filled with so many "absurd" moments in general that you'll be equally be enthralled in it's ridiculousness the entire time. 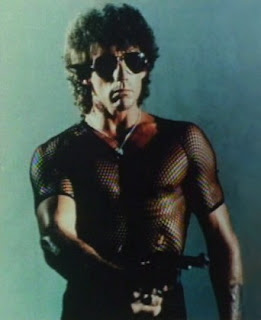 New Zealand actor Peter O'Brian, looking a helluva lot like a knockoff Rambo, is a revelation in this. Never having acted before, it shows, but goddammit is he fun to watch. Seriously, this film would not be anywhere near as entertaining had he not starred in it. Though his hilariously dubbed voice is amusing in and of itself, his stoic, deadpan physical delivery is what seals the deal on this one. I wouldn't necessarily call him an actor, but physically, he fits the bill to a "T". Everything from his unemotional facial expressions that never seem to chance; no matter what the situation, his insanely over-the-top outfits that scream 80's, his curly mullet thing he's got going on, and his ability to kick the living shit out of someone using his entire body make for one helluva entertaining experience. While he's only appeared in a handful of films, the story goes he was discovered at an airport in Indonesia by the Punjabi Brothers producing partners, and cast in a few of their films simply because he was Caucasian (International appeal), and because he looked so much like Rambo. Whatever the real story may be, thank gawd they found this guy. Needless to say, I'll be on the hunt for everything he's ever appeared in.

It's pretty standard stuff story-wise; O'Brian plays The Stabilizer, a guy who works for the government who specializes in............."stabilizing" the balance between good and evil. That's not me trying to be funny or clever, it's in the actual fucking movie. He's sent to Indonesia to stop a big time drug dealer and in the midst, discovers he's the same guy responsible for killing his wife years ago. With the help of a few others, he infiltrates the organization and all hell breaks loose.

While Final Score played it straight, and most of the time coming off as hilarious because of it's terrible acting, dialogue and dubbing, The Stabilizer seems to know how silly all this is from time to time because there are some truly bizarre moments that no normal thinking human being would include if they weren't in on the joke. But then again, maybe they had no clue and all this was on purpose? Regardless, there are plenty of laugh-out-loud moments where you'll holler "Ooohhh" or "WTF?!". So from an entertainment level, The Stabilizer is pure Bad Movie Night gold.

If you've never seen or heard of this, do yourself a favor and DO NOT look up the trailer. Just buy it, gather some friends together, have plenty of alcohol, and watch it. It'll be quite the entertaining experience.
Posted by robotGEEK at 10:47 AM