As I mercilessly pour over countless bad films in the hopes of finding that one diamond in the rough, I've discovered that for every 1 good bad movie, there are a good 10 just plain awful ones. And I have to be honest, it gets discouraging after repeated viewings of lame bad movies with no entertainment value or redeeming quality. But, every once in a while a gem is discovered in the sea of this specific little niche, and Hard to Die AKA Sorority House Massacre 3 is one of those films.

Directed with gusto by Jim Wynorski (Chopping Mall), back when he was at the top of his game (80's through the early 90's) so to speak, Hard to Die is a bad movie fans wet dream. It really is. It possesses everything you could possibly want in a bad film, and it's all amped up to 11 on the entertainment scale. What we have here is 5 women dressed in lingerie, stuck in a high rise building with a killer. We have tons of unnecessary gratuitous nudity, bad acting, tons of machine gun action by the lingerie wearing females, cheese, action, horror; the works! And let me tell you, it's all entertaining as hell in an epicly cheesy way.

I'm surprised that I never heard of this film until recently, considering it was released in 1990. Even more surprising is the fact that though you'd never know by it's title and cover art, this is supposed to be the 3rd film in the Sorority House Massacre series. But when the entire film takes place inside of a high rise building rather than a Sorority House, the producers decided to change the name. And I don't know about you, but that cover and title do nothing to tell you what the film is actually about, instead giving us the false idea that this was a low-budget actioner, when in reality, it's a pretty badass action/horror film drenched in 80's cheese (yes I know it was released in 1990). And on the So Bad It's Good scale, this one exceeds the highest mark on that particular scale, making it easily one of the best Bad Movie Night additions I've come across so far.

Before I go any further, please allow me to clear a few things up concerning this VHS cover. First of all, the two images of the females in leather on the left and on the spine are not in this film. I have no idea where they got those images from. Secondly, disregard that cover completely as it makes it look like something completely different, and that is a paint-by-numbers low-budget action film. This is anything but that. And lastly, that whole "It's the female version of Die Hard" quote by none other than Joe Bob Briggs. This is "NOT" a female version of Die Hard. Not by a long shot. So there, just forget all that dodgy marketing. It's ridiculous. And believe me when I tell you that Hard to Die will exceed your expectations of gratuitous T & A action/horror, and won't be the same lame paint-by-numbers droll we've seen countless times. No sir. This is Bad Move material at it's finest! 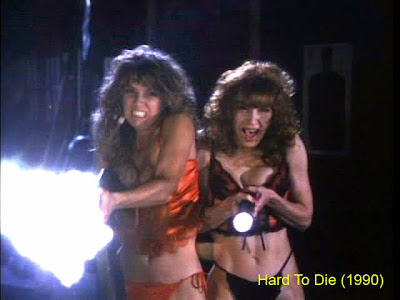 What was interesting was that even though they got rid of the SHM affiliation in the title, they have a huge flashback sequence that goes back to the first SHM film, giving us that odd connection to the trilogy after all, which seems totally random and out of nowhere. But, even though this takes place in an entirely different place, the character of Orville Ketchum is the driving force behind this film, who also just happens to be the person they suspected was the killer in one of the previous films. It's a little complicated because they reference a lot of what goes on in Part 2, yet they show scenes from Part 1, so I don't know. Regardless, you don't have to have actually seen either of the first two films as the whole flashback sequence lays it all out for you. Orville Ketchum is now working as a janitor in the high rise office building and when bad things start happening, the lingerie employees immediately suspect Orville as the culprit, and go about trying to survive long enough to see daylight.

There is so much about Hard to Die that defies logic or explanation, that I often wondered what was done on purpose and what was a happy accident. But, even if some of the silliness or cheesiness may have been on purpose, it's done in such a way that you more than likely won't be able to tell. It's silly, cheesy, tongue-in-cheek, and quite ridiculous, but in the best possible way. The amount of absurd in this film goes to epic levels, and by the end, you'll have a gleaming smile clear across your face.

Jim Wynorski, under the alias Arch Stanton, directs with a frenetic and stylish energy, reminiscent of his excellent work on Chopping Mall, that it more than likely will leave you a little bummed that he doesn't churn out classic's like this anymore. This is the sort of film I had been hoping to come across for a long while now. The kind of film I was hoping Murder Weapon would be. It took a while, and a lot of duds, but I'm happy to report that Hard to Die is easily one of the best, most enjoyable bad movies out there.

Now time for some bad news. This is a very hard film to find. It's original VHS and DVD release goes for big money on the secondhand market, so you more than likely won't pay any less than $50 for either the VHS or DVD. It sometimes becomes available on YouTube intermittently, or you can find a rip online for under $10 from various sites. Which ever way you get it, trust me when I say that it'll be worth it. It's just fucking awesome.
Posted by robotGEEK at 3:41 PM