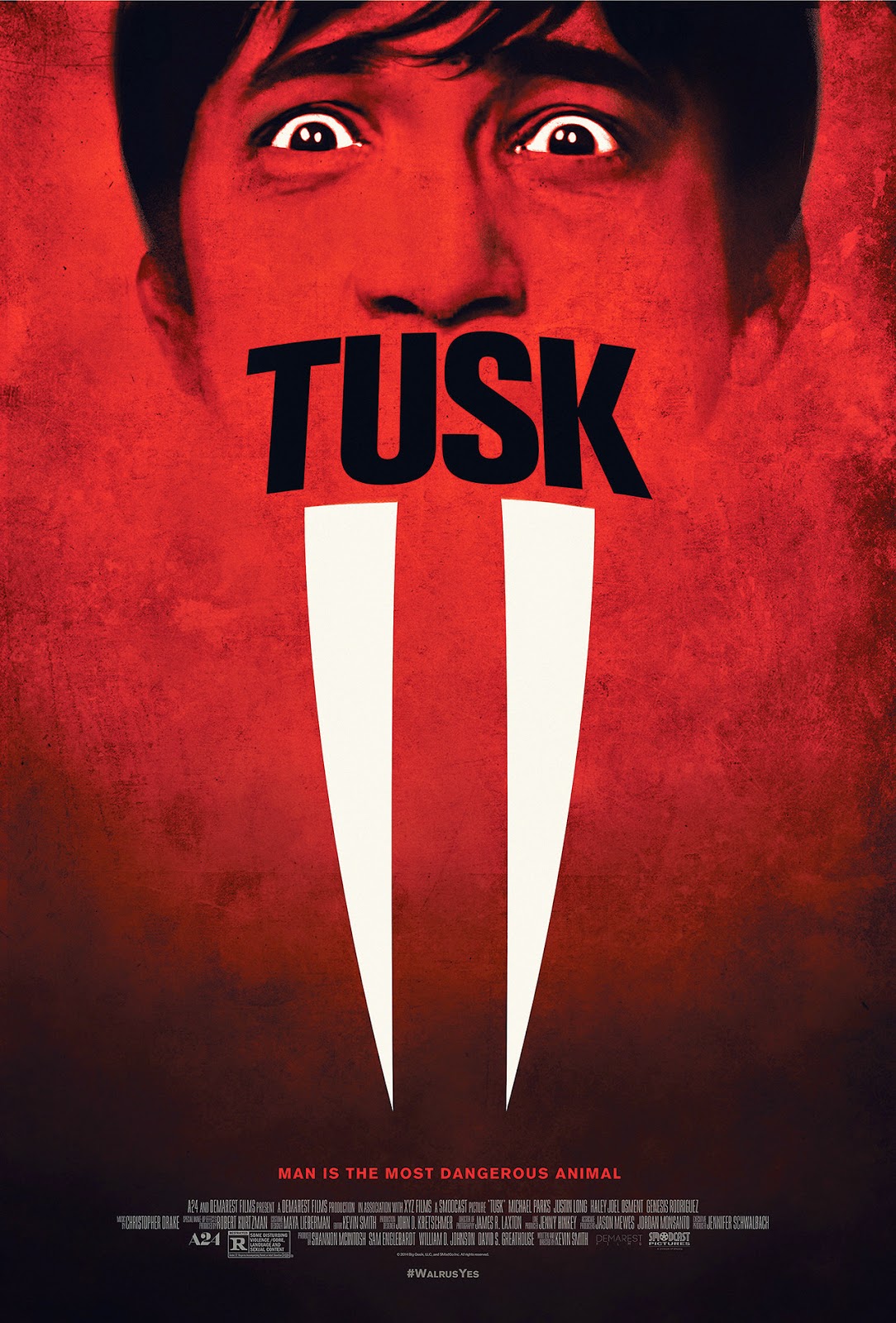 Let's just get right down to it; you're either gonna love Tusk, or you're gonna hate it. It's just that simple. Tusk is one of those rare films that come out every so often and divides filmgoers right down the center....and for good reason. I'll just come right out with it. Personally, I didn't enjoy this, and for a number of reasons.

So, let me begin by saying that I was in fact very excited about this release. Though it didn't hit any of my local cinema's, I waited in high anticipation for the moment when it would eventually hit DVD and Blu ray. You see, Kevin Smith is a very particular type of filmmaker, and much like Tusk, you either enjoy his type of films or you don't. For the most part, I enjoy them. While not every film of his is a slam-dunk, the few that do work work effectively well, thus cementing his cult status as a hip indie director with a sharp wit, that's easily translated through to his dialogue in all his films. But then out of nowhere he comes out with Red State, his first horror film, and it literally blew me away. Not only was it much better than I could ever have expected, but it was also nothing like what I could have expected. No one could ever claim that Smith is a stylish director. He films everything pretty straight-forward, with no real eye for style or detail, yet not one single time during Red State did I ever think to remember that I was watching a Kevin Smith film. I'm sure the look of it had a lot to do with his DoP, but holy shit man, that film was stylin' to the max with some stellar camerawork.

So yea, I was excited at the prospect of another Smith horror film. Warning: Spoilers Ahead. Tusk is one seriously weird and fucked up movie. Now, I love weird and fucked up as much as the next guy, or maybe more so, but this one was just too weird for my taste, because it wasn't weird in a good way. It felt like he wasn't sure what tone he wanted to pursue. Sometimes it's a little light and funny, sometimes it's a little serious, and sometimes it's a little dark. But through it all, it's uncomfortable. Smith puts his characters through situations that make you cringe for sure, but in this particular case, his main protagonist, is just pretty much a dick of a human being. The way he interacts with every single other character in the film makes you realize that there are indeed assholes like this guy in real life. Viewing awkward after awkward exchange between Wallace (Justin Long) and basically any other character proves to be too much at times as his brash and sarcastic nature makes you wish horrible things upon him.....which is what ultimately happens.

He's a horrible human being, but that's not really what bothered me. He's a dick and makes his living off of being a dick to everyone, and he gets what's coming to him in more ways than one in the end. But the film as a whole is so uneven that I could never figure out what type of film it was trying to be. This is made all the more apparent when the retired detective character shows up halfway through the film. It's such a drastically different character from anyone else on screen, and such a caricature that it's almost as if he came right out of a Pink Panther film. It's at this point where the film takes yet another shift in tone and believe it or not, makes the film about 10 times weirder than it already was.

But being as it's being sold and marketed as a horror film, you naturally expect a bit of gore with your horror, but we don't get any of that here, which is a shame. Sure there's a good amount of makeup effects work from Robert Kurtzman, but when it comes to actual gore, there's not much here.

We all know the story by now right? Guy gets duped into an interview in Canada by a strange older fella, then gets turned into a walrus. Weird. But, I find that intriguing, because it's so far fucking out there that the possibilities are endless. I was really looking forward to this one, but when it was all over, instead of having a sensation of "That was awesome!", or "That was insane!", or "That was intense!", or "That was so fucked up and I loved it!", our immediate reaction afterwards was "That was weeeiiird".

I would never classify this as a straight up horror film, because most will undoubtedly walk away severely disappointed. I think I'd call it experimental horror, just to warn anyone who might be misled. It's weird and uncomfortable, with no real standard horror elements at play.
Posted by robotGEEK at 1:25 PM