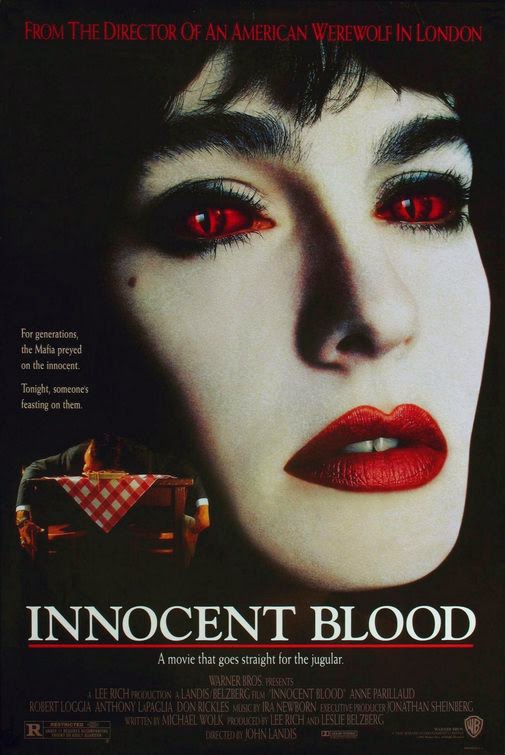 For some strange reason, John Landis's Innocent Blood is quite obscure. Nobody ever talks about it, and it's not a fairly easy film to come by. I had come across the Laserdisc some time back, and since it was cheap, figured "what the hell?". It had been ages since I saw it and I remember nothing about it. I did some quick searches for reviews and the majority of them were overwhelmingly positive, so I was excited to throw this bit of 90's horror nostalgia in the ol' Laserdisc player.

I had zero expectations going in, just that I had hoped that Landis would deliver. I mean, the guy is responsible for some really great pieces of cinema. With films like An American Werewolf in London, Animal House, The Blues Brothers, Three Amigos!, Trading Places, Thriller, Spies Like Us, Coming to America, it's hard to see how the guy can fail. Yet......he has.....repeatedly. Let's just say the early 90's was the last time he gave us a decent film, even though he's been working regularly since then. Looking back on his filmography, I'd have to say Innocent Blood is his last great film, and yes.......it's pretty great.

I can see how or why this didn't do so well upon it's initial release. It's a strange mix of genre's for sure, so I doubt the studio knew how to market the thing for mass appeal. It's essentially a horror film, a tongue-in-cheek comedy, a romantic comedy, an Italian mobster film, and a cop thriller all mixed into one insanely entertaining flick. That's not an easy thing to do, yet Landis and writer Michael Wolk do just that. I'll admit, the first 15 minutes had me a bit worried. It didn't start off how I was expecting it to, and it seemed like things were taking a bit too long to get going, but it was just a setup really. All these different genre's come into play, and you're kind of thrown for a loop thinking "how can they pull this off?". But they do my friends. Surprisingly, they all blend together perfectly for a film that defies categorization, with some clever writing, some solid direction from Landis, and an incredible cast to boot.

Anne Parillaud (La Femme Nikita) stars in the title role, and is just excellent. Cute, adorable, and sexy as hell, yet lethal, cunning and dangerous all at once. We also have a cast of Italian mobster "regulars", the same guys who play the same roles in every mob movie ever made, but it's Robert Loggia who steals the fucking show in this. If you love the guy when he's in crazy angry mode a la David Lynch's excellent Mulhallond Dr., then you'll love him even more in this because here, he's Robert Loggia turned up to 11, and it's glorious. I've seen him angry in plenty of films, but I have never seen him more animated, more absurd, and more menacing than he was in this. Loggia steals the fucking show. And of course, what movie would be complete without Landis throwing in as many cameo's as possible. Only true cinephiles will catch them, but they're there. Tom Savini, Dario Argento, Frank Oz, and Sam Raimi are all here, as well as a few other notables in the business.

I was quite shocked to learn a few things about this production afterwards. (1), that Landis didn't write the thing himself as it carries a lot of his specific style of horror and comedy mixed together. And (2), that he wasn't even initially set to direct. Jack Sholder (A Nightmare on Elm St. 2, The Hidden) originally had the gig, with Lara Flynn Boyle starring in the role of Marie, and Dennis Hopper in Robert Loggia's main villain role. While I could definitely see those two in the lead roles, I'm glad Landis chose who he did because they're pretty great. I would have loved to see what Sholder would have come up with, I'm not sure how well he could have handled the romantic comedy aspects of the story. I think Landis was a very wise choice in the end and he knocked Innocent Blood out of the park.

From what I understand, shockingly, Laserdisc is the only way you can see this film in widescreen. The only DVD release, which was back in 2004, is in dreaded full frame, with no special features. Such a travesty. Laserdisc seems to be the only way to go if you really want to enjoy Landis' full aspect ratio, which you can get surprisingly cheap on eBay. Just make sure you inquire whether it's in widescreen or not before buying.

Innocent Blood has everything you want in a horror comedy. Great visuals, stellar cast, excellent make-up effects, and an insanely infectious vibe that entertains from beginning to end. If you haven't seen this in a while, or ever, then you should get on that immediately.
Posted by robotGEEK at 3:58 PM