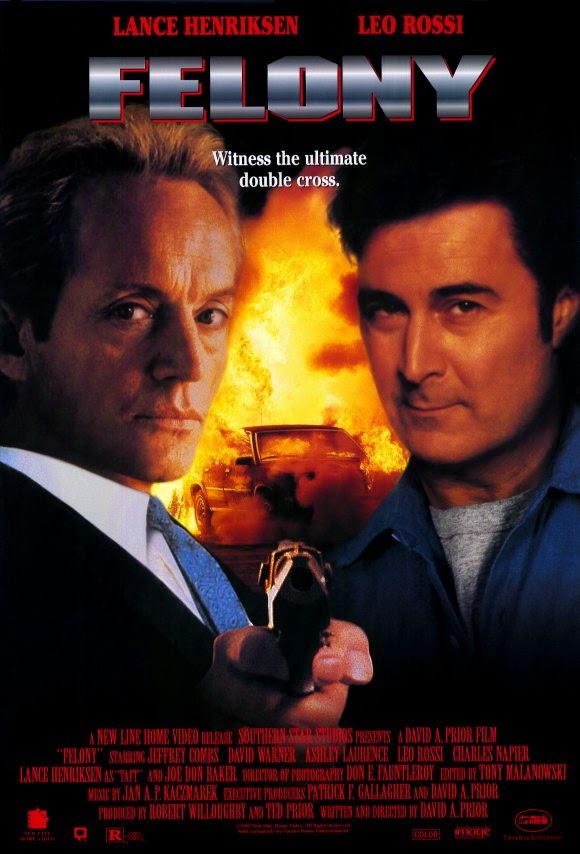 1994
Directed by: David A. Prior
Category: Action

Felony is a DTV flick written and directed by Deadly Prey legend David A. Prior, and starring a pretty incredible cast if you ask me. I'd never actually heard of this film before, which isn't a total surprise considering how many of these low-budget Z Grade films are released every year. But when the fine folks over at Comeuppance Reviews recently did a review on this and I saw all the talent involved, I jumped right in.

Man, I don't even know where to start with this one. I really don't. I guess I should start off by saying that this was just flat-out terrible in almost every way imaginable. But on the flipside, I found it so terrible that I enjoyed every minute of it, because I'm a huge sucker for bad movies.....and this one is pretty bad folks.

You'd think that with as many films as David A. Prior has made, he would have learned something by now about filmmaking in general. But no, here we are, with a film released in 1994, 24 films after the release of his first film Sledgehammer, and the this film looks and feels like something a first timer made. But before I get into all that, let's begin with the cast, which itself is an odd mix of well-known's and quite frankly a strange mix. First off, the star of this action film is none other than Jeffrey Combs (Re-Animator)....yes, that Jeffrey Combs. You'd never guess it since he's not even on the actual cover, but it's true. On the cover is of course Lance Henriksen, who stars as a very bad CIA agent, so he's the bad guy, not the star like the cover you leads you to believe. And Leo Rossi (Maniac Cop 2, Halloween II) is also on the cover, but he's just a cop in the film, and nowhere near one of the leads. I guess the studio didn't think Combs would be passable as an action star so they threw Lance on the cover to sell it? Perhaps. Funny thing is that Lance doesn't even look like this in the film. He never wears a suit, and his hair is black, not blonde. So......clearly some stock photo from somewhere else. But one things painfully apparent, Combs is no action star. Don't get me wrong, I love the guy. I mean, he's fucking Dr. Herbert West for christ's sake. But as an action star, he just don't fly. He's 100% unbelievable in the role.....so much so that it's painful to watch sometimes and horribly miscast. He tries his hardest though, so I gotta give the guy props for giving his all.

The rest of the cast is bizarre to say the least. Ashley Laurence of Hellraiser 1 & 2 fame stars as a sympathetic nurse, with a who's who of regulars who round out the cast such as Joe Don Baker, Charles Napier, a gum-smacking and annoying David Warner (Tron) as a hitman, and even six time Miss Olympia Cory Everson, who's just severely wasted in this as nothing more than arm candy for Lance Henriksen. All of these people; big actors who have done some great things, yet somehow all converged to participate in this film based simply on the script. I just don't get it. Above all, practically everyone in this film is terribly miscast.

Every aspect of this film is lazy beyond comprehension. After 5 minutes, I knew exactly what kind of film experience I was in for. It's almost as if everything is completely half-assed. Like, Prior writes and shoots a scene without any thought to logic or believability. Scenes run awkwardly and painfully too  long, the dialogue is just flat-out awful and hilarious, the puns and one-liners are just so damn painful, and worst of all, there's just no sense of logic to anything. How the cast read this script and agreed to star in it is beyond me. And there's just so much wrong with this film on a technical level. The editing, the uninspired camerawork, lazy performances, and incomprehensible dialogue all make this quite an experience.

Here's a few examples:
- There's a scene where Bill Knight (Jeffrey Combs) - the real star of the film, has run back home after being attacked by hitmen, where he narrowly escapes. Of course while he's home they follow him there, and so he takes off.....naturally. Only, instead of running out the back door or maybe even possibly hiding in an area of his own house he knows they can't find him, he decides to run full force through his kitchen window to escape. The fuuuuck? Doing a mid-air flip in the process as he tumbles to the ground and makes his escape yet again. Why would he throw himself through  his own window?

- There are 3 different scenes where, for absolutely no apparent reason, there is a huge car crash where a car will literally go flying through the air. For example, a guy, who up until this point was just a regular television camera operator, is being pursued by some hitmen who are after a video tape he has. So as he's attempting to flee, he suddenly decides to pull out a gun and shoot some random driver who passes by, to create a diversion, and the guy dies with his car going flying (somehow) through the air landing on another vehicle before they burst into a huge fireball. So now suddenly he's a murderer? Oh, and as he's fleeing, apparently nobody else on the street of at least a dozen people noticed this car crash, or the fact that he just murdered someone in broad daylight.

- These hitmen that keep going after everyone apparently can run around the city with their guns drawn shooting randomly and nobody on the street seems to ever notice or care.

- A cab driver is transporting his customer (Jeffrey Combs) as the hitman (David Warner) pulls up next to the cab and starts firing at least 6 shots, shattering windows and hitting the doors of the moving cab. Through all of this, again at least 6 shots or more, the cab driver doesn't even notice his car is being riddled with bullets, that is until he gets shot and dies of course.

- Early in the film, Bill (Combs) is shot in the right arm, essentially leaving his arm useless. Then later in the film he gets his left hand shot, making his left hand useless. Then miraculously his right arm is well enough to do all the running and jumping and climbing and shooting that is required of an action star. All within the span of a day.

Absolutely nothing in this film is plausible, which of course makes it so much fun. Yes, despite all my complaints, I really enjoyed this film because of how terrible and ridiculous it was. It was entertaining to say the least. and for that, Felony gets a passing grade. I just couldn't stop laughing or yelling "Oh come on!" at the screen. Then ending.....holy shit that ending. I thought I had seen it all in this film until that "you've got to be fucking kidding me" ending. If you thought anything that happened in the film was so far beyond the reach of reality, then you haven't seen anything until you see the last 20 minutes of this film. Just.....holy shit.

Felony is one great bad fucking movie. Oh, and Ashley Laurence is crazy hot in this.
Posted by robotGEEK at 11:52 AM