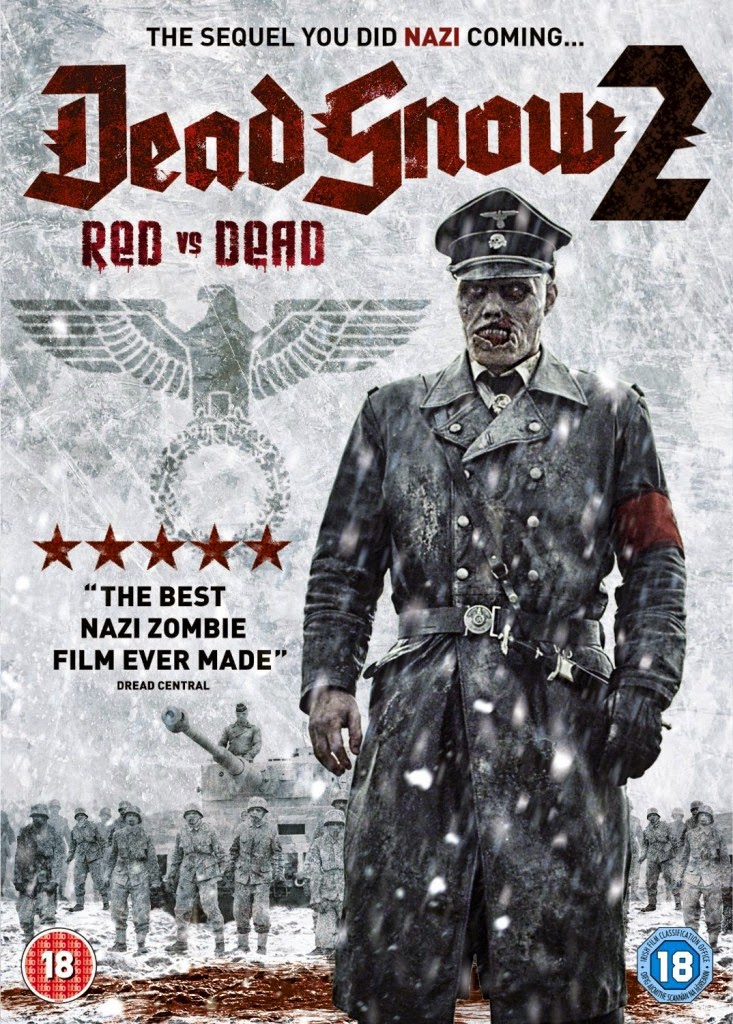 Thanks to Netflix finally offering this on their streaming service, I was able to check out the sequel to the now cult classic Dead Snow. What's more, the original star, writer and director have all returned to give us another go at some Nazi Zombie's. This time around, star Vegar Hoel, who is great by the way, contributes to the films script, along with the originals director Tommy Mirkola, and screenwriter Stig Frode Henriksen, who also plays a goth in this film.

So let's get down to it. Dead Snow 2: Red VS Dead is a helluva ridiculous fun ride. It's apparent nearly right from the beginning that they owe a lot of debt to Evil Dead 2, and as such, it carries a certain tribute to that particular film in it's execution and tone. When this finally hit streaming a short while ago, every review I read was essentially the same, that it was batshit crazy, fun, and much more insane and gorier than the first. That's all true. Yet, despite all this, I still find myself enjoying the first one more. I liked the buildup to the crazy as hell final act of the original, compared to the balls out insane pace from start to finish of this one. Don't get me wrong, this film is awesome and fun, but it's also not nearly as badass as I was hoping for. At times it felt a bit lagging. Lagging in what? I have no idea. It just didn't seem to flow as great or as effortlessly as it should have for the most part. And Tommy Mirkola's usual visual flair seemed to be tightly restrained this time around, which is surprising as he's quickly become one of the better visual horror directors out there. If the original Dead Snow proved anything, it was that while he was clearly influenced by Sam Raimi, he could certainly put a little spin on it and create his own specific style. Yet here, I was surprised to find a more restrained approach. Surely I would have expected some more of a kinetic vibe, but alas, that was not to be.

The gore content is considerable, as expected. The acting is much better than I was expecting to be honest. And the inclusion of American geeks into the story was somewhat surprising, but you know, it is what it is. You'll enjoy it, as did I. It didn't blow me away as much as I was  hoping, but for an all-out gorefest about Nazi Zombies, it's an entertaining ride.
Posted by robotGEEK at 10:49 AM