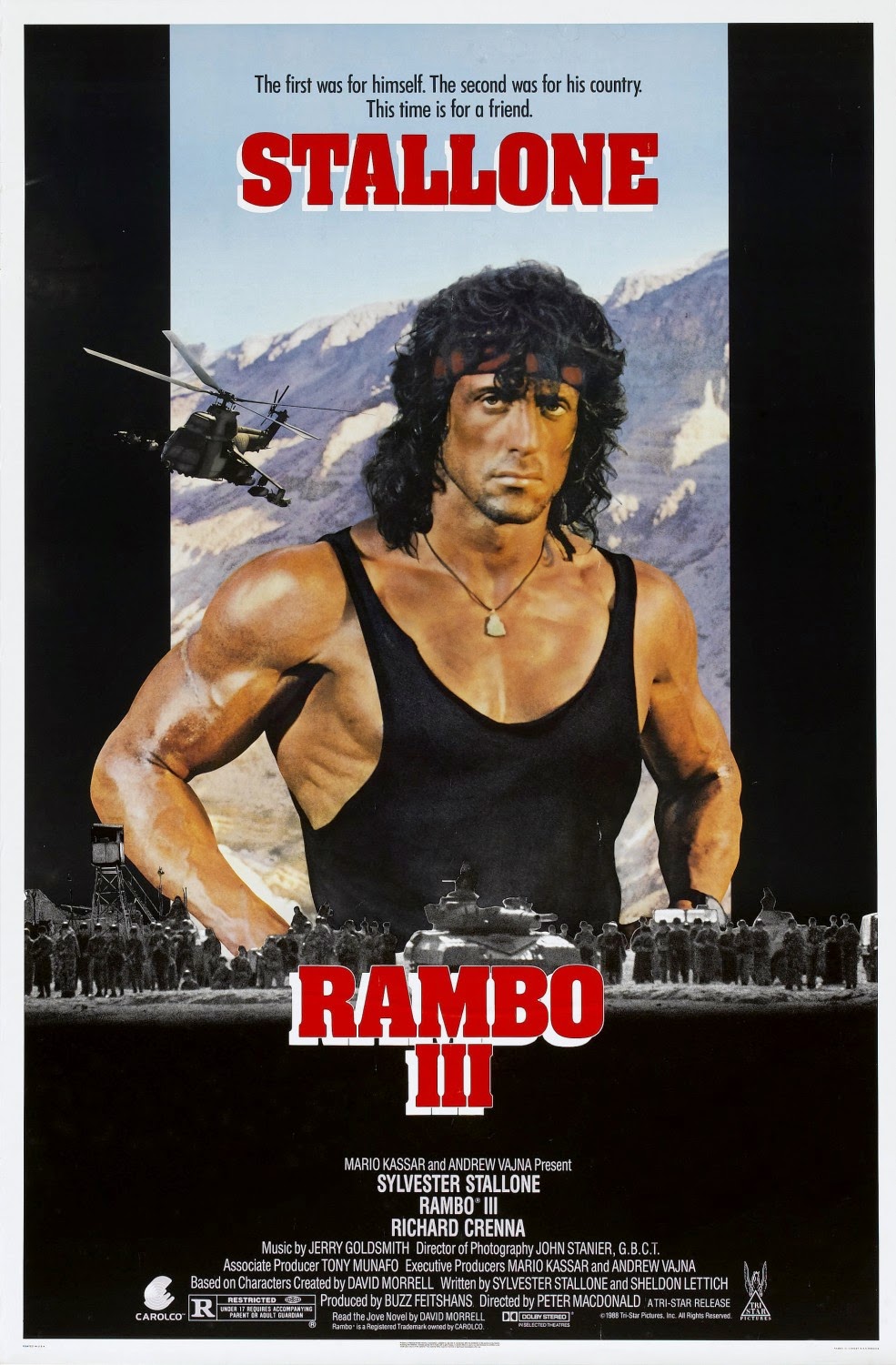 I'm not sure why I've always dismissed this film. Seriously, it's taken me nearly 30 years to revisit this one and it's only because a fellow filmgeek encouraged me to do so. I think a lot of it has to do with it's reputation in general. We all know by now that it was a flop at the box office, and we all know by now that it had largely to do with just bad timing in general, with the story revolving primarily around Afghanistan and the fact that we were having some stuff going on back then in 1988 just didn't make for a pleasant reception. So even though I've owned the 3 film boxset for years, I never thought twice about watching Part III. But an Instagram buddy, who essentially shares the same tastes in films as I do, suggested that I give it another shot. Saying that I would be pleasantly surprised.....and he was right.

My initial feelings while watching this were how insanely badass this film was, and afterwards how much of an idiot I was for neglecting it all these years. Rambo III is undoubtedly one of the best examples of cheesy '80's action cinema, and a prime example of Badass Cinema. So much of this film is just spot on in terms of hitting all the right notes in what makes an action film badass and memorable, and while I'm sure the intent wasn't for it to be cheesy by any means, the result is that it is in fact cheesy, but in the best and most entertainingly possible way.

Second Unit Director Peter MacDonald (Batman, Rambo II) takes the reigns of first time director on this film, with Stallone and 80's action maestro Sheldon Lettich (Lionheart, Double Impact, Bloodsport) on writing duties. MacDonald, who cut his teeth on many an action film before and after this does an outstanding job on both a technical and visual level. It's hard to imagine how you can make a film stylish when most of it takes place in the Afghan desert, but he succeeds full-heartedly in that respect. This film looks amazing, and it's a testament to some top-notch choreography, camera work, and visual brilliance that makes it so aesthetically awesome. Yet, at the same time, it also carries a bit of a cheesy action vibe. It's really hard to pinpoint how or in what way, but it's just a simple fact, and in no way should the term "cheesy" be taken as a derogatory term in regards to this film. No sir. It's actually quite a breath of fresh air, because it works splendidly.

Speaking of cheesy, a good chunk of that can be credited to Stallone's and Lettich's script. While it is in fact meant to be taken as a serious action pic, and for the majority of it's running time, it is, there are so many insanely cheesy one-liners and quips that you just can't help but laugh at the audacity of these guys. I'm sure Stallone is responsible for those, as they are meant to make his Rambo character sound cool, but they just come so far out of left field that you are kind of taken aback when he snarkily replies with some smart-ass remark, even when he's facing certain death. Well done Mr. Stallone. Well done sir.

It's rare when I watch a film and feel the need to immediately sit down in front of my computer and throw down some words on what I've just experienced, but that's exactly what I felt when I finished this film, which happened literally just 5 minutes ago. I just couldn't get over how insanely badass this film was from start to finish, and I feel I need to let others in on this little secret, because from my point of view, it deserves a far bigger reputation than it currently has. It's pure 80's action gold, and I just couldn't put it any other way.

Even if you haven't seen the film, surely you know the story by now. Rambo is living a life of seclusion in Afghanistan (not sure why), and is asked to help on a mission by none other than Robocop bad guy Kurtwood Smith. When he refuses, his old commander, Col. Trautman does the job instead, getting captured in the process. So Rambo feels he's got no choice but to rescue his old commander and friend. And that's essentially the story in a nutshell. I know they try and show the plight of the Afghan people in this, but I'm more interested in the rescue storyline, and it's a pretty straight-forward one.

Rambo III is a technical marvel. The stuntwork in nearly every action sequence is awe-inspiring, with Stallone himself doing so much of the work himself that you start to wonder how the insurance company ever allowed it. I'm not talking just running away from explosions, which has been his forte in almost every action film. I'm talking about some seriously dangerous stuff on horses, helicopters, ropes, rocks, mountains, tanks, you name it. And it's clearly him; no CGI super-imposed face over a stuntman's body. This was 1988 after all. But insane stuntwork is all over this thing, not just with Stallone, and so much of it is over the top, which just feeds into it's excellent 80's vibe. For example, Rambo is fighting with a huge Russian on top of a mountain, right next to a hole he just crawled out of at the top that feeds into a huge cave inside the mountain. As they fight, Rambo manages to engage two grenades attached to the Russian's gear, then wraps a rope around his neck and throws him down the hole. As the Russian falls, he breaks his neck when the rope reaches it's full length. A split second later, the grenades go off, and even though he just died a second ago by having his neck snapped, his body explodes in a firey ball of blood and fire. Awesome. Rambo III is filled with over the top moments like this, and it's spectacular.

It's interesting to read on all the drama going on behind the scenes in this particular entry in the long and successful franchise. After two back to back flops with Cobra (I still can't believe that) and Over the Top, he needed a hit. And what better idea than to make another Rambo film, considering Rambo II was a huge box office juggernaut 3 years earlier. Yet there are reports that the films original director, Russell Mulcahey (Highlander, Razorback) left after 2 weeks over creative differences, as well as 3 different Cinematographers. Though you'd never know it. The film has a consistent visual aesthetic, and for an action film, it's very slick. Aside from it's awesome action and stuntwork, I think that's one of the biggest things I noticed immediately; how slick it all looked, even during the insane action sequences. It was also the most expensive movie ever made at the time. Not sure if that was the budget right from the start, or if it went over-budget due to problems, but all that money's on the screen and it looks amazing.

Rambo III surprised me at almost every level. It's an exceptional piece of Badass Cinema, and excellent example of what the 80's had to offer in the action genre. I'm shocked and pissed at myself for waiting so long to revisit this, or that it took someone to push me to do it. Don't be like me. If you love 80's action, give this another watch. You'll be glad you did.
Posted by robotGEEK at 3:54 PM