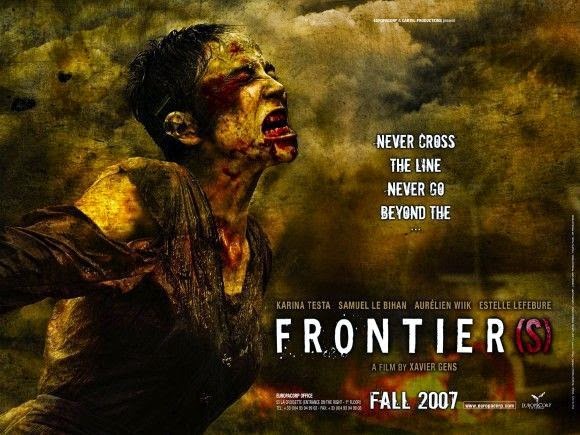 French horror is quickly starting to become one of my favorite horror genre's. While I haven't seen a lot of horror films from over there, the few I have seen are quite awesome. It seems they have a specific way of making films. A specific style and aesthetic, and the gore content doesn't seem to be as frowned upon by the MPAA over there as it is here. So in that regard, I've noticed French horror films are much more gorier than anything we see down here in the states.

I honestly knew nothing about this going in, which is sometimes the best way to go. I was told that the guy who did this also did one of the segments on ABC's of Death, the one where the overweight woman cuts off fat from her body to look thin. That....was such a graphic segment that I knew I'd be in for a treat.........and I was.

Minor Spoilers Ahead:
Frontier(s) as a total surprise. Not knowing what "type" of horror film to expect lends itself to a vast array of possibilities. Ultimately, I felt like this film played out more like a French version of The Texas Chainsaw Massacre more than anything, which was a total surprise. I won't get anymore into it, as you should experience it as blindly as possible, as I did. END SPOILERS

The gore is insane, and the films pace and vibe is intense, making for a truly unrelenting experience. This film went places I never saw coming, and for that, it's easily one of the better horror films I've seen in a while, not just in the French Horror genre, but from anywhere really. It's gritty atmosphere, coupled with writer/director Xavier Gens' raw visuals gives the film an air of constant dread.

I should note that the girl you see on most of the poster art is not the star of the film, the I did find one with the real lead of the film for this post. The real star of Frontier(s) is Karina Testa and she's magnificent. Watching what she has to endure both physically and emotionally as the film progresses is gut-wrenching. She is easily the driving force behind what makes a lot of this film so great and if Frontier(s) didn't have her intense and raw acting abilities behind it, it wouldn't have been half as successful as it is.

While not quite on par with the excellent and unrelenting Martyrs or Inside, this one sits more closely with High Tension, another excellent French Horror film, until the ridiculous twist ending. Absolutely worth a rental or purchase, and one of the more surprising horror films I've seen in a long while.