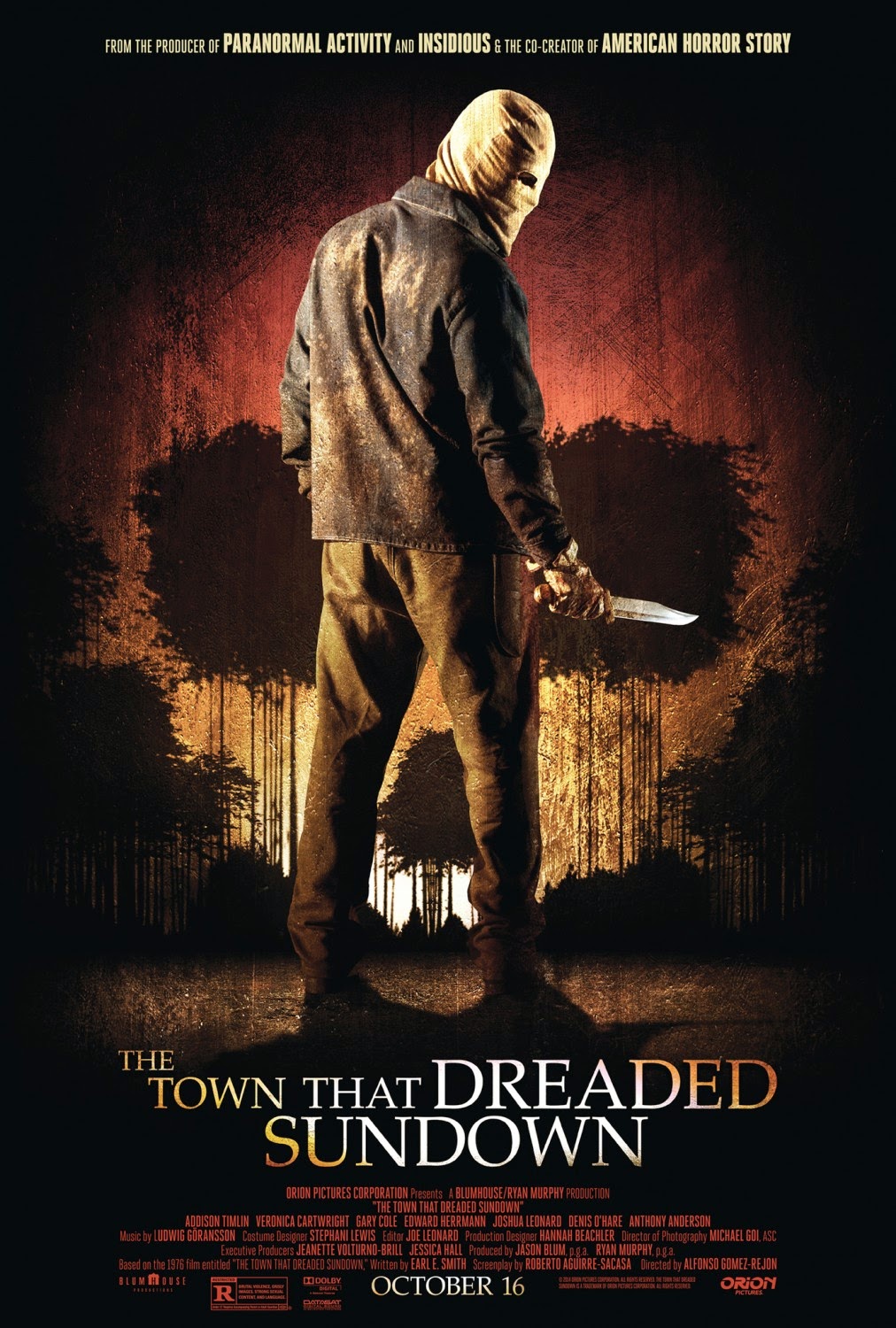 I don't mind telling you that I found the original Town That Dreaded Sundown to be one of the dullest, most boring films I've ever seen. I find it so dull in fact that I struggle to understand it's cult status. I just don't get it. I like the idea of the film, but I have so many major issues with it's execution that I just couldn't find anything to actually love about the film, other than the cool look of the hooded villain.

But when I learned they'd be remaking that film, I have to admit, I got a little excited. As much as I generally don't enjoy remakes, if any film could benefit from one, it would be The Town That Dreaded Sundown. No contest. Then when I discovered that the team behind American Horror Story would be responsible, well you can say I was pretty much sold right then and there. But of course, as with most of these types of films, it didn't get a big theatrical release, or if it did, it sure as hell didn't make it down here to my crap little town. So I had to wait till Netflix began streaming it online this past month to finally catch it.

The Town That Dreaded Sundown is a mixed bag. It has some strong positive attributes, but also has some things about it that keep it from being awesome. It's hard to categorize it as well, since it's not really a remake in the general sense. Rather, it's more of a pseudo-sequel, if that makes any kind of sense. I'll just leave it at that though; the less you know, the better.

On the positive side, it's visually impressive. Director Alfonso Gomez-Rejon, who cut his teeth directing television shows like Glee and AHS, offers up some really outstanding visuals, some solid camera work, and a sleek visual aesthetic that's sorely missing from new horror films these days. On the flipside though, you can tell he's done nothing but television work up until now as the camera is constantly moving. Not in the shaky-cam sense, but in the continuously flowing steadicam movements kinda way. I can't remember a single moment when the camera was not swooshing from one side to the other, or traveling on a steadicam rig. While a lot of the shots are pretty great, the constant movement of the camera proved to be a bit jarring from time to time.

Another plus is the cast. While not really casting that will knock your socks off, it's pretty solid overall. The effects work is also pretty impressive, of what little you get to see. My issues with the film in general come from a few angles. For one, the film is a tad too slow for it's own good. While mostly engaging, it slows down considerably in the midsection, and for a film that plays out more like a thriller rather than a flat out horror film, you need to keep the film moving at a brisker pace if you're going to excise over-the-top gore and scares. My only other real issue would be the constant camera movement, but you already know about that.

Not a bad film by any means, it's just too slow for my taste. I'm glad I saw it. It's very well made, with a strong visual aesthetic, but I'll probably never see it again. I can tell you one thing though, I'll take this one over the original any day.
Posted by robotGEEK at 3:32 PM