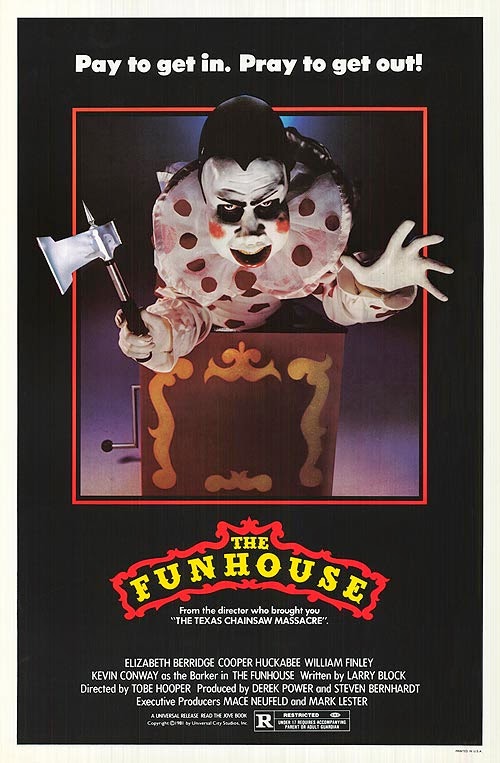 As big a fan of director Tobe Hooper (The Texas Chainsaw Massacre, Lifeforce) that I am, and a guy who's eagerly been awaiting a comeback, it's taken me this long to finally sit down to watch The Funhouse, a carnival themed horror film he directed in 1981, a year before Poltergeist. Taking into account that both of these films are only a year apart, the two couldn't be anymore different.

I love old school horror, and though I was a young fella who loved an insane amount of it growing up in the 80's, there are still a lot of them that seemed to slip through the cracks, and The Funhouse was one of them. I was certainly aware of it, but never heard any buzz that would cause me to physically go seek it out. It wasn't until Scream Factory decided to release this cult classic under one of their always awesome Collectors Editions recently that I was interested enough to give it a look. As with most titles, if Scream Factory or Shout Factory are releasing something under their banner, it's a safe bet it will be an underrated, long out of print or never released gem.

The Funhouse begins the way most horror films should, in the middle of a killer sequence through the POV of a mysterious figure going through a house seemingly looking for a victim, an obvious homage to Halloween. I like these setups right in the beginning. They give you an immediate sense of urgency and danger. Sure, slow build-ups can be just as good, if they're well thought out. But sometimes it's just nice to have it thrown at you right in the beginning. It's like they're telling you "Check it out! This is the type of film you're getting yourself into". It doesn't hurt that they were gracious enough to throw in some boobs while they were at it either. Good job guys!

Four friends decide to hide and out and sneak into a traveling carnival when they've closed down for the night. What they hadn't anticipated was the real-life monster, part of the circus attraction, stalking and killing them one by one in a demented maze.

One of the things I love most about old horror films, mainly from the early to mid 80's, is how dated they look. That's part of the charm and for that reason alone, The Funhouse made for a fun experience. What's also became immediately apparent is that this film was a huge influence on Rob Zombie's directorial debut House of 1,000 Corpses. Once the group infiltrates the carnival and encounters a few of the crazy people who run it, it made more and more sense that Zombie's Corpses was almost a remake of The Funhouse, only with a much different aesthetic. Hooper's Funhouse plays out a little more streamlined and polished than Zombie's film, yet it doesn't possess any of his trademark visuals that he would become known for just a year later with Poltergeist and on through the rest of the decade with other notable films like Lifeforce, Invaders From Mars and The Texas Chainsaw Massacre 2. Rather, it bares more in common with one of his earlier films, Eaten Alive, which came out 4 years earlier. On the other end of the spectrum, as strange as it sounds, I feel Zombie's House of 1,000 Corpses is by far the more entertaining and stronger film. A bit amateurish, which is part of it's charm, but a different beast altogether.

I'm a little divided with this one. While The Funhouse has it's fare share of competency and authenticity in the world of Old School Horror, it also lacks in certain areas where it seems like it could have greatly benefited from. For example, while it's a fun ride through and through, it's never as exciting as you feel it should be. Like, whether for budget reasons, inexperience or simply lack of a better script, the film never goes further than it has to. There were a few scenes that surprised me a little bit, and I think that it's because of those scenes that you kind of expect the rest of the film to live up to, yet it doesn't. Taking into consideration that none other than Austin, TX filmmaker Tobe Hooper was at the helm of this after having already solidified his name in the horror community with the original and still terrifying Texas Chainsaw Massacre, as well as a few other cult classics like Eaten Alive and the Stephen King TV Movie Salem's Lot, which garnered him some respect and critical acclaim, it seems only fair to assume that some of the lackluster feeling The Funhouse produces is from Lawrence Blocks script. Seeing as he's only ever had another credit to his name, which would be "story" for the ill-fated low-budget film Captain America, that would be a fair assumption.

Special makeup effects master Rick Baker, who we all know and love, worked on the makeup effects for this film, and again, as with the films script, comes up short in terms of creativity. Honestly, if I hadn't looked it up, I never would have known that someone with Bakers pedigree was behind the sub-par effects work here, especially when you take into consideration that he was also doing An American Werewolf in London the very same year. But then again, maybe that was why his work here suffered as a result? Maybe suffered is too strong a word. How about "uninspired"? They're not terrible, just nowhere near the caliber we come to expect from someone as great as Rick Baker.

While not as engrossing or imaginative as it could be, it benefits from a retro look and feel playing on the strengths of Tobe Hooper as director and a decent ensemble cast. I wouldn't necessarily call The Funhouse a classic of Old School Horror, but it's definitely a decent one. My strongest issues with it are that in almost every department, they play it too safe.
Posted by robotGEEK at 6:51 AM