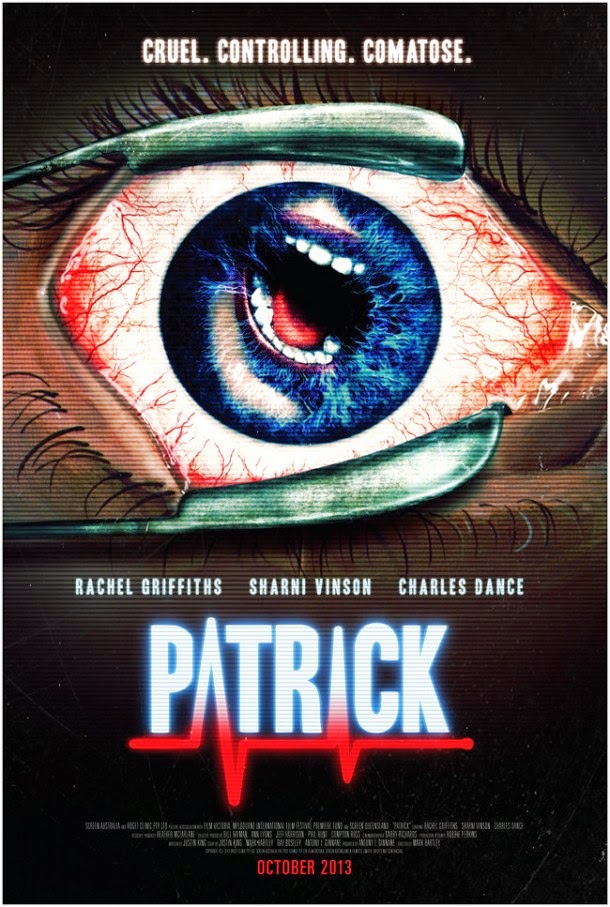 I should probably start by saying that I have yet to see Richard Franklin's original 1978 Ozploitation classic of the same name, long considered an essential entry in the suspense genre. So I went into this remake knowing only basic information on the plot, guy in a coma wrecks havoc in the hospital using telekinesis, but quite aware that it is in fact a remake of a much loved film.

What I was also gleefully aware of was that Mark Hartley, director of such insanely entertaining documentaries such as Machete Maidens Unleashed and Not Quite Hollywood, of which the original Aussie classic Patrick was a big part of, would be making his feature length film debut with this. What I was not prepared for was how much I would end up enjoying it.

Is it perfect? No. But despite it's shortcomings, it's a helluva lot of fun. Right from it's opening frames, it's immediately apparent that director Mark Hartley has taken great pains to carefully and meticulously craft and execute each single frame of film with some surprisingly inspired visual pizzazz. For a first time horror director making his feature film debut, it's pretty damn impressive. And if it wasn't for the films lackluster and overuse of CGI, I'd be hard pressed to say that it's one of the most visually inventive horror films I've seen in a long while. It really is, only sadly drowned in an overabundance of unnecessary CGI. I can appreciate what Hartley was trying to accomplish using digital effects, but for most of the film it felt like too much. It just seems that sometimes it's the easy way out of crafting a sequence, rather than trying to be inventive and using practical effects work. Unfortunately it's an all too common problem in today's horror market, and Patrick is no exception.

Don't get me wrong though, I loved the film, because Patrick has a LOT going for it. It's sleek visual style for starters, but the casting is another thing you get excited about almost immediately, especially when Charles Dance (Alien 3, Game of Thrones) makes his appearance and you realize "Holy shit! Charles Dance stars in this!". He's pretty great as the resident doctor with an agenda, and honestly, his delivery is just fucking fantastic; arrogant, mean, temperamental and with a dry sense of humor all at the same time. It's really his performance above all else that ties the film together. So we're already dazzled by Dance's dance of charisma, so who do they get to play the object of Patrick's insane affection? None other than Sharni Vinson, who surprised the hell out of me and kicked some serious ass as the heroin in the severely underrated and fun You're Next. As with You're Next, she's got this amazing ability to play both sweet and tough. It's not an easy thing to pull off, but Vinson is able to do that just rather easily.

So that brings us to Patrick. Based on everything I've read about the original film and all the reviews I've come across over the years, I think part of what makes that film work so well, aside from Richard Franklin's (Psycho II, Road Games, Cloak & Dagger) sure-handed direction, is star Robert Thompson's face. His face? Yes, his face. It's got a lot of character, especially in those eyes. Hell, even on the films DVD and Blu ray covers that shines through. To be able to pull off an entire film simply looking comatose, but also making it appear that you're actually acting is no small feat, yet Thompson was able to do just that so many decades ago. He has so much character in his face, and I think that's part of the charm of that first film. With the remake, that doesn't seem to be the case. For some reason, director Hartley decided to go a different route, instead casting someone who looks like a model, almost too good looking and not menacing. But maybe that was the director what he was trying to do in the first place? I don't know. It just doesn't seem to work as effectively as Thompson did originally.

As I mentioned before, it often feels that there was too much CGI work in here. And you know, sometimes that can be fine. I'm not against it by any means, but when you rely on it too much for practical purposes, then it gets to be a bit too much and takes away from a lot of the work you put into it to begin with. Overall though, they just don't measure up to practical effects work. High grade or low quality, practical effects work will outshine CGI any day. Instead, it's painfully obvious it's pure Direct-To-Video quality digital effects work here and the film suffers for it. Thankfully, not by much, because despite it's lackluster digital effects, the film as a whole is admirably inventive in other ways and Hartley, to his credit, pulls off a really well made horror film for his first time out. As he's hard at work on post production on his latest feature length documentary on Cannon Films called Electric Boogaloo: The Wild, Untold Story of Cannon Films, I hope he continues to take other stabs at genre films. He's undoubtedly got a grasp for what it takes to put a film together well. Here's to hoping (as I imitate holding a glass of wine in my right hand) for many, many more.

Posted by robotGEEK at 3:25 PM