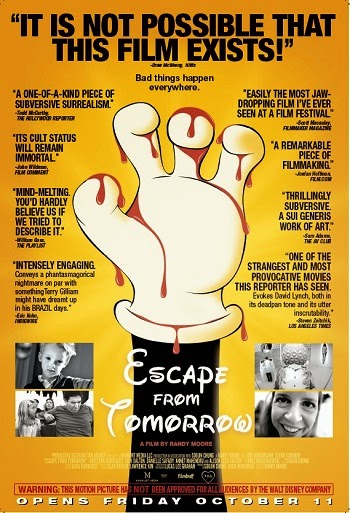 Here's the best way to explain the experience of watching Escape From Tomorrow. Well, my experience anyway. As soon as the end credits rolled, I looked over to my girlfriend whom I was watching the film with and the first words out of my mouth were "What the fuck was that?!". My mind just couldn't comprehend what I had just seen. A film that, by definition, is not really a film, but rather an experiment in the bizarre, the surreal and more importantly, cheap on-the-fly inventive filmmaking.

If you have not yet heard about Escape From Tomorrow, then here's some quick info. Basically, first time writer/director Randy Moore shot most of this film inside both Walt Disney World and Disneyland.......without permission. Impossible right? Yet he did it by using a whole lot of planning and coordination and by primarily using a small crew pretending to be tourists using "video mode" on their Canon camera's. Crazy! It's a ballsy idea, but he did it. And if  you know anything about the Walt Disney Company, you know they're fiercely protective of their property and brand. Production on this thing was so tight that even when they premiered it at Sundance, nobody would say what theme park was used as the setting and during post edit, he took it to South Korea to edit and put in special effects so Disney wouldn't find out. And surely by now they've gotten wind of this thing so you have to wonder why it hasn't been prevented from being made to the public. Well I believe the official word is that the lawyers feel it falls under "parody", and so they've pretty much left it alone. And while it's never actually called Disneyland in the film, it's blatantly implied. So with all this being said, you're probably now wondering.....is it a good movie?

That is where I am conflicted. It's really going to depend on your personal taste; what you consider art, cinema or nonsense. If you're into the films of David Lynch, or experimental films in general, then you may enjoy it. If you're a fan of more linear films, then this might not be for you. Me? I'm somewhere in the middle. Personally, I found the film overall to be too weird to enjoy. Even when it was over and I had time to digest it, I honestly couldn't make sense of half of it. I'm still not entirely sure what the film is about and what supposedly did and didn't happen.  Yet on the other hand, I'm in awe of the experimental aspect of it all and just the simple fact that this film got made at all the way he made it. Logistically, this film should not exist. It's supposed to be impossible to make a dark and surreal horror film about Disneyland inside Disneyland, but he did. That alone demands respect and admiration. And while the film is weird and structurally uneven, it's also fascinating. Like, you can't look away and even when it's over, you're left thinking about it for a long wile, trying to make some kind of sense of it all. That alone doesn't make a good film, but if that was their intention to begin with, then they've succeeded. A week later and I'm still replaying that entire film in my head.

If I were to simply put my immediate initial thoughts down, I would have to say that it's a mess; visually, thematically and structurally uneven from beginning to end. It takes no pains to try and explain anything and though you know what different ideas it's trying to convey, sexual frustration/fear/anxiety/unhappiness, first time writer/director Ronald Moore never puts them together well enough so that it makes any kind of sense and worst of all, comes off as extremely amateurish and dull. Most films are made to entertain us in some way, and in that sense, Escape From Tomorrow fails. It's as if the film itself doesn't know what is supposed to be surreal and what is supposed to be real. It almost seems like Moore intentionally tries to lead you in one direction, and then purposely trip you up with a simple comment that almost completely undo's what your whole idea of what was happening to begin with. That happens several times in the film, most importantly when his often unbearable and mean-spirited wife comments on how she thinks that it's somehow the park that's making her husband act out. That one comment right there is the complete opposite of how she'd been reacting to his behavior throughout the entire film up to that point and honestly just feels out of place. Furthermore, some entire sequences just feel like they're from an entirely different film altogether, like the Epcot Center sequence, and that they were just thrown together to make the film run longer. While visually the most impressive sequence in the entire film, it still feels like it comes out of left field and you wonder if you're still watching the same movie. I don't know what reason that sequence had being in it, but it's such a radically different experience from the rest of the film that again, you're left wondering "What the heck was that?!".

For all it's immensely admirable, fascinating and shocking guerrilla filmmaking, it never comes together well enough to be enjoyable. With that being said, yes, you should still see it. If anything, for simply being audacious. You wonder what kind of film we would have been given had Moore not been relegated to shooting the film guerrilla style in secret. Would it have been more coherent? Probably not. Regardless of it's impressive filmmaking tactics, the film itself is so uneven structure-wise and so damn confusing that above all else, it really just could have benefited from a much sharper script.
Posted by robotGEEK at 11:54 AM