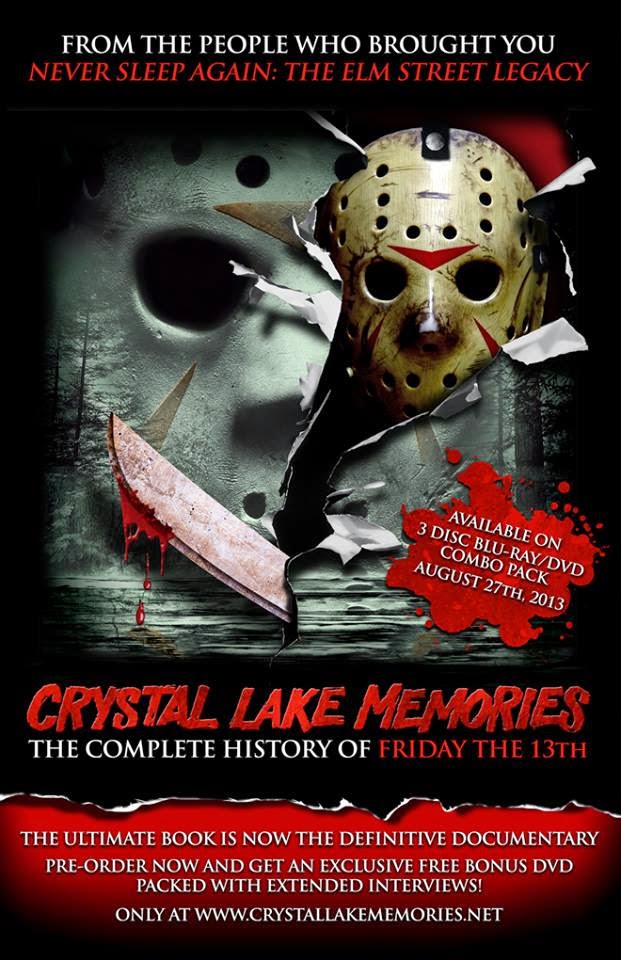 I've always held the Friday the 13th franchise above all the others, like say the Halloween or Elm St. films. Not overbearingly high, but well enough above other slasher types like Freddy or Michael that for me, the Friday films sustain a constant theme, unlike say the Elm St. films for example, which pretty much went the way of fantasy after Part 3. And as far as the Halloween films go, I honestly feel that the only good ones out of all of them are the first 3 and the Rob Zombie versions, which are pretty awesome. I never, ever thought I'd say that since I avoided them so long like the plague, but holy shit, Zombie made 2 seriously authentic and entertaining slasher films with his 2 Halloween films. The rest are quite simply dull and uninspired films. If there was any other horror franchise that could rival my love for Jason and Friday the 13th, it would be the Texas Chainsaw Massacre films, which I happen to love to death.

Crystal Lake Memories: The Complete History of the Friday the 13th is a documentary worthy of the Friday the 13th franchise. Exhaustive, comprehensive and immensely entertaining, this documentary only rivals the equally great Never Sleep Again: The Elm Street Legacy, which also happens to be produced and directed by Daniel Farrands, the writer and director of this doc. Inspired by the book by Peter M. Bracke, Crystal Lake Memories covers everything from the original films origins to it's many, many sequels all the way to the 2009 reboot and even the better-than-it-should've-been television series. You also get in-depth interviews by as many cast and crew members as humanly possible and even the critical, fan, and box office reception of each individual film, something that they also did with Never Sleep Again, and an area I feel is greatly important that's usually missing from these types of documentaries. Even with the terrible entries, you hear from the cast and crew of those particular ones and you learn why they turned out so awful, or maybe instead, you grow an appreciation for it. It's your call.

Now I know what you're thinking, "Didn't we already have a Friday the 13th documentary?". Yes, yes we did, and that doc was called His Name Was Jason: 30 Years of Friday the 13th, released in 2009. And guess what? It's also directed by Daniel Farrands, go figure. I've actually seen that documentary, and though I know a lot of people like it, I never did. It just always felt like something was off, or missing. It never flowed well, and lacked any kind of entertainment value. Maybe it was the people they chose to interview? Regardless, I didn't really care for them. But it seems Farrands might  have picked up on that because his work on Never Sleep Again was phenomenal, and it's certainly translated into Crystal Lake Memories.

Wrapping things all together is none other than Corey Feldman, of Friday the 13th: The Final Chapter, on narrating duties. This guy. I keep hoping Feldman gets some kind of a comeback. The guy has been in the business for god knows how long, and while he's still relatively young, I feel he's got the right kinda charisma that can easily translate to a second coming, should anybody give him the opportunity. Sure he still makes headlines from time to time - a while ago for his reality show and being married to a Playboy Playmate, but most recently for his crazy ass parties now that he's a single man again. But I still think he's got it, and if anybody deserves a comeback, it's that guy.

Clocking in at an impressive 400 minutes, you'll have hours and hours to dig into this insanely comprehensive and informative documentary. If there's an entry you love more than others - for me Part 4 and Part 6 being personal favorites - you'll be sure to get more info than you bargained for and that right there is worth more than this Blu-ray's ticket price. This shouldn't even be a question, rather an immediate purchase and in impulse buy. Do yourself a favor, buy this fucking Blu-ray ASAP and just be done with it already. You know you want to.
Posted by robotGEEK at 4:21 PM