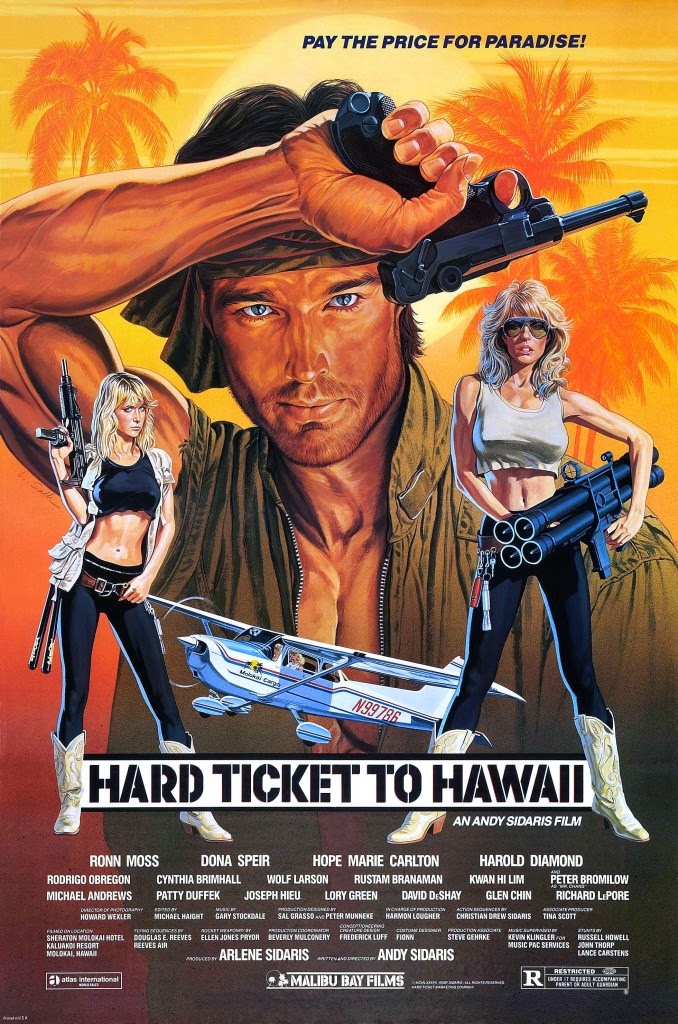 Bad Movies are not as easy to come by as you think. Let me rephrase that. "Good" Bad Movies are not easy to come by as one might think. It's a true art form to be able to take a simple premise and make something so gawd-awful because of sheer ineptness on the filmmakers part. Films like Samurai Cop and The Room fall under that category. Then there are filmmakers that make films rather well, albeit on a budget, that just can't write a decent script if their life depended on it, usually nonsensical, with logic thrown out the window in favor of nudity, violence and some truly bad acting. Andy Sidaris is that filmmaker, and Hard Ticket to Hawaii is that type of film. And it's fucking glorious.

It's hard to say what was going through writer/director Andy Sidaris's mind when he sat down to write Hard Ticket to Hawaii, but the revelation in an interview that he had written it in only 3 days is no surprise as the film is utterly ridiculous from beginning to end, in the best possible way. My guess is that he was going for something of a spy thriller/action film, and filled it with Playboy Playmates, a famous soap actor, and a toxic mutant killer giant snake for good measure. What you have is a film that is as preposterous as it sounds, made by a schlock, yet talented filmmaker known for his brand of "Bullets, Bombs and Babes" style of films and you've got the perfect recipe for Bad Movie Night.

The story should be a simple enough one. Something about diamonds that a dealer wants back that he believes were stolen from him during a shipment and the secret agents who get caught up in the mess by accident. If that's not enough, for some odd reason there's a side plot about a toxic mutant giant snake that's escaped it's cage during a transfer and...............well you just need to see it. Trust me.

I'd been aware of Andy Sidaris's films since the 80's, having come across those VHS covers of buxom babes on a regular basis at the local video stores, but being a teenager, I wasn't allowed to rent them. And you know, I've never given them too much thought either. Sidaris's films are a particular flavor of film that I just wasn't into growing up, yet I was aware of them. And to be completely honest, had I seen these films back in the 80's when they originally came out, back when other films like Predator, Action Jackson, Die Hard, or any Van Damme and Seagal fare were my type of action films that I was running to the theaters to see, I'm sure I would've thought they were crap. That's me and my teenage immature mindset. But as I've matured, albeit almost 30 years later, I've grown to appreciate all types of films and genre's. One of them being the "So Bad Their Good" films, a sub-genre of films that I am in love with at the moment. Sure you can invite some friends over, enjoy some beers and watch a funny movie or a good horror film. But nothing beats watching a truly enjoyable bad film with a group of friends. Simply put, they are the best, and this one here is one of the better ones you'll find out there. Why you ask? Let's dig in.

The beauty of Sidaris's films is that nothing is bathed in reality. We're made to believe that every woman on the planet looks like a Playboy Playmate or a supermodel and every male a muscular rough around the edges macho man. Women don't wear bra's, and whether you're a secret agent or a waitress, you wear as little clothing as possible. And when it comes to sex, nobody actually does any thrusting or is naked from the waist down, rather lots of naked and awkward kissing is where the magic happens. Also, even if you have a group of crazy armed drug dealers after you, it's always important to take a hot-tub break often to do your best thinking. The dialogue is hilarious to say the least, with some of the worst quips I've ever heard spoken out loud in a film, with most of them making absolutely no sense whatsoever, which is why they're so damn funny. And the action scenes are insanely ridiculous. I'm talking about frisbee's with razor blades glued to them, a guy being blown up with a rocket launcher in mid air, a guy who uses a blowup doll while riding a skateboard to attack 2 guys in a jeep, impalement by snake, and that's just the tip of the iceberg. But here's the thing, director Andy Sidaris, believe it or not, films it all rather well. There's no denying the low production value, but as far as being able to competently film and edit it all together, it's shockingly done exceptionally well.

The acting, surprisingly, isn't all that bad, considering the script and lines of dialogue they had to work with. But there is always that one exception, and in this film, that guy is Harold Diamond, who plays Jade, a secret service agent. This guy is easily one of the worst actors I've ever come across. Big, muscular, tan, long thick hair and with a cockiness to match. And that's why he's without a doubt the most entertaining character in here. His delivery is just so odd that you keep replaying his lines in your head just to make sure you heard him correctly. Doing a little digging I find out that he's a real life kickboxer and Muay-Thai champion, so not an actor by trade and god does it show. But the most exciting news to come out of this is that apparently he's the star of Killing American Style, director Amir Shervan's follow-up to the incredible Samurai Cop. I had actually bought KAS recently, but have yet to watch it, completely unaware that Harold Diamond is the star! Needless to say, I'm even more excited than ever to watch it and I'll be fixing that this weekend. Everyone else, including Bold and the Beautiful soap actor Ron Moss (Ridge!) are perfect casting and pull off their roles with enough conviction that you often wonder how they can keep a straight face with these ridiculous lines of dialogue.

If you're looking for a good time, you just can't go wrong with this film. It's got everything you could possibly want for Bad Movie Night; lots of tits, lots of action, lots of bad acting, lots of bad dialogue and a weird mutant killer snake subplot to wrap things up. Andy Sidaris made a number of these Bullets, Bombs and Babes films in the 80's and 90's, and though I haven't checked these other ones out "yet", I can't imagine any of them being able to top this piece of cinematic gold.
Posted by robotGEEK at 10:27 AM