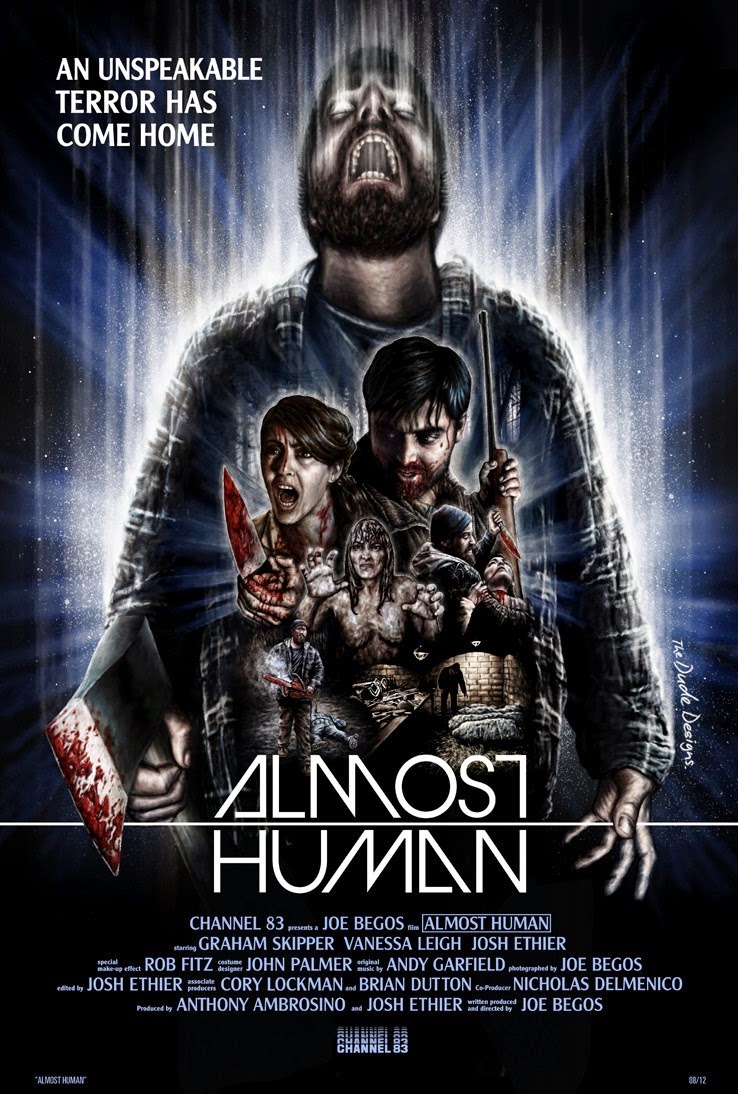 Almost Human is a horror film written/produced/photographed/directed by Joe Begos. I know very little about this film other than the fact that it's been released under the IFC Midnight label, which bought the distribution rights after premiering at the Toronto Film Festival and that it was made by a small group of friends. It's been on my radar recently as the poster seems to pop up on different sites I follow on Facebook from time to time-I'm guessing when these sites are following up on the film's production and limited VOD release. You have to admit, that's a really cool poster. Rarely does anybody ever bother to release a full-on painted piece of poster art anymore, and for this reason alone, this film has stuck in my head. Recently it was added to Netflix Instant's list of new films this past week and so this was the perfect chance to see what it's all about.

I've seen on more than a few occasions that it's been referred to as a "throwback" or a "homage" to classic 80's slasher films, most notably by a guy I follow regularly, John Squires - the Freddy in Space guy, whom I admire and respect greatly, where he gave this a favorable review, essentially calling it a throwback done right. So as we sat down to watch this, we were more than a little excited. So was this the slam-dunk 80's slasher horror throwback it's been hailed as? Sadly, no. But that doesn't mean it's a bad film, because it's not. In fact, it's pretty good.

I think what gets mixed in the idea of describing this as a throwback is what exactly classifies a film as a "throwback". Here's what I found with Almost Human. The film, on a technical level, is made well, and put together as such. It's got some insanely impressive practical effects work and the acting is better than you expect it to be. And if I had to describe it, I would say it's a cross between John Carpenter's The Thing, Invasion of the Body Snatchers and Fire in the Sky. But that's where the similarities to any 80's comparison ends, because while it has all of these impressive technical aspects, the fact of the matter is that it just doesn't look or feel like an 80's horror film, much less a "throwback". And what's interesting is that even though the film technically takes place in 1986, you'd never know it. Unfortunately, I think a lot of this is because writer/director Joe Begos just doesn't shoot it in any way to give it that homage or 80's feel, instead he films the picture the way 90% of new directors make movies these days, all hand-held style. Now, with Almost Human, yes, there are a few nice steady shots here and there, but the majority of it is in a hand-held free-style approach, and because of this, it just "looks" like any new horror film coming out these days. You can't say it's stylish, and certainly not definable at that. My thing is that if you're going to go through the trouble of making a film in the vein of these old school style horror films, make it "look" like one. This one looks and feels like any new horror film I randomly pick browsing Netflix on any given day.

I also found the pace a problem. Things happen, yes, and Andy Garfield's score keeps a constant eerie dreadful vibe, but there's never an urgency to anything, never any excitement. Everything's choreographed well enough; chases, fights, kills, but it's never built up very well to have any real effect. And that could be for a number of reasons. Editing, or just in how the music plays out in these specific scenes. But something always seems to be lacking when it feels like it should have had a much bigger impact. Maybe in the hands of a more experienced filmmaker would have made a difference, and perhaps a slightly more polished script.

With that being said, Almost Human is a film worth checking out. Creatively mixing a few genre favorites together and the use of some really great practical effects make for competent and well put-together film, only bogged down by it's uninteresting visual style and an often amateurish feel. It's short too, so even if you don't like it, you only need to invest an hour and 7 minutes of your time. Just think of it as an episode of Game of Thrones or House of Cards or something. One thing is for certain though, you'll more than likely be frustrated when the end credits come around. But I'll let you figure out why on your own. Almost Human is a good film, just not a great one.
Posted by robotGEEK at 1:14 PM