My Revenge review, and why director Tony Scott was the best 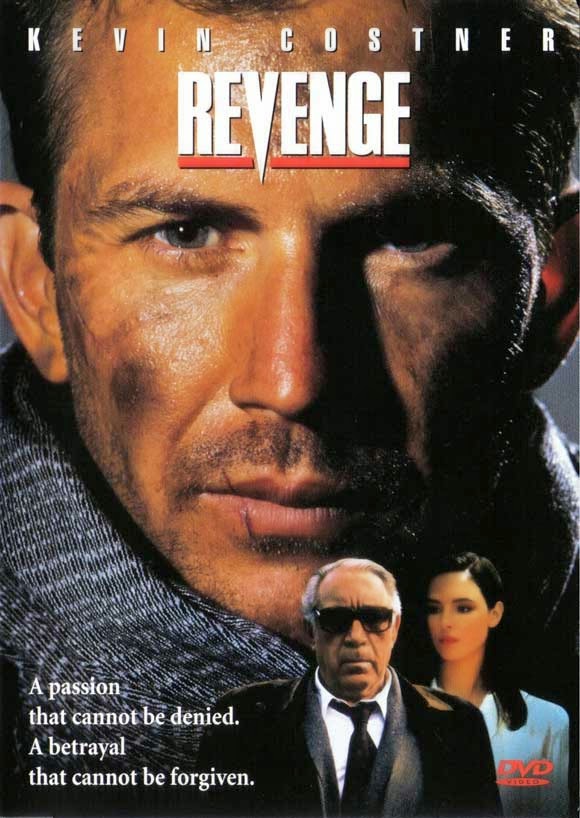 Top Gun, Beverly Hills Cop 2, Revenge, The Last Boy Scout, and True Romance are about as perfectly dated and iconic as an action film can get and all owe a great deal of their success to director Tony Scott. Beverly Hills Cop 2 (The best in the series), released in 1987, should and could have been just another throwaway comedy sequel, but with Scott behind the camera, he created something much more effective, infusing the film with action and a cool Miami Vice style that easily ranks as one of the best sequels ever made. It's because of Scott that BHC 2 ended up being the most loved in the franchise. His visual style was and is 100% definable. You could always tell whether a film was a Tony Scott film or not, from the particular lenses he used, to the constant light and smoke effects he implored in almost every scene and his trademark zoom shots. He was able to create a visual brilliance that no other director has ever been able to replicate to this day. And for my money, Revenge is the cream of the crop as far as Tony Scott films go.

Released in 1990, Revenge is sandwiched between Scott's massively successful blockbuster Beverly Hills Cop 2 in 1987 and his ridiculously entertaining machismo-fest The Last Boy Scout in 1991. By no means a hit by any stretch of the imagination, Revenge has since garnered a huge cult following and a long delayed appreciation for this entry in the revenge thriller genre, and deservedly so. On the surface, you can mistake this as a paint-by-numbers revenge film. But the beauty of this thing is that it plays out in the most unexpected ways, even right down to the showdown between Cochran (Costner) and his former friend Tibey (Anthony Quinn). Nothing rarely goes the way you expect it to in Revenge, and it's climax is no exception.

The thing you'll notice more than anything is that while Scott's films tend to be loud, fast-paced and riddled with over-the-top action, Revenge takes the slow-burn approach and takes it's time setting up the film and introducing you to all the characters. Though not really the sort of film Scott as a director was accustomed to, by this time Kevin Costner already had a few thrillers under his belt with No Way Out and The Untouchables. Costner, just about entering the height of his success, teaming up with director Tony Scott in the peak of his career proved to be an excellent match. Not quite the megastar he was just a year or two later exudes an air of confidence that, considering his rather small size, is pretty impressive. He's a tough motherfucker with an attitude, and Costner, to his credit, pulls it off effectively well.

You could say that Revenge almost plays out like a western. Substitute Mexico for the desert, and Costner's retired fighter pilot for a wandering hero who befriends the baddest man in the land and ends up falling in love with his wife, and you have the makings of a great western. In all fairness, it's certainly shot like one. Every inch of Revenge is sun-bleached in reds, oranges and yellows and you'd be hard-pressed to find a single character in the film "not" sweating. And the story, guy falls in love with crime bosses wife and then is almost killed and left for dead before he heals back and seeks revenge on his former friend who took the woman he loves away, while nothing new, could be told in almost any genre. But as an old fashioned straight-up thriller, it oozes cool right down to the bone.

And guess what? It's crazy fucking cool. This movie is so badass and tough as nails that it should be on everyone's list of their favorite "Revenge Thrillers" or "Badass Cinema". I'll admit, I myself easily dismissed this one when it first came out. Being a fan of primarily action and horror films, I found no interest in a tale of lost love seeking revenge. It looked slow and the trailers never really showed a large amount of action for a Tony Scott film, something that really surprised me. So I never really gave it a chance. I remember catching up with it about a good 6 or 7 years ago out of the blue and again, wasn't really swayed in any way to change my initial reaction. But as I've grown older, I've grown an appreciation for certain kinds of films and filmmakers and since Scott has and is still one of my favorite film directors ever, I thought I'd give it another chance. As I sat there just the other day absorbing Scott's brilliant visuals and Costner's annoyingly macho protagonist, one thought kept running through my mind over and over again; "I love every second of this fucking movie!". Followed by "Why did it take so long for me to dig this?!". I don't know, and I may never be able to answer that question, but one thing is for sure, Revenge is awesome.

Newly retired Cochran (Costner) is looking for a vacation after a 12 year stint as a hot-shot fighter pilot. He takes the offer of a friend Tibey to go visit him in Mexico for some sun and relaxation. Tibey (Anthony Quinn) is a wealthy socialite with ties to the criminal underworld and a penchant for violence. Soon a passionate love affair with Tibey's trophy wife Miyrea (Madeleine Stowe) erupts, and when Tibey finds out, he leaves Cochran for dead and kidnaps Miyrea, leaves her disfigured and forced into prostitution after a brutal attack. With the help of a kind stranger, Cochran mends his wounds and he's only got one thing on his mind.....REVENGE.

* TC: Theatrical Cut, DC: Unrated Directors Cut
Now, there are 2 versions of this film out, the Theatrical Cut and the Unrated Directors Cut. So which one do you see? Generally when a director approved DC comes out, it's something to get excited about. However, it seems Tony Scott took a different approach to this one. Nearly "cutting" over 15 minutes out of the film, a lot of scenes have been severely cut down and alternate takes used with others. A lot of fans of the original cut were none too pleased as they feel some crucial interplay and narrative has been thrown away in exchange for longer and steamier sex scenes that interrupts the flow of the film. Don't get me wrong, I'm all for more naked Madeleine Stowe, but when you sacrifice consistency for nudity, is it worth it? There are others though who feel that it moves the film along faster and that it's all the better for it. But the consensus is that the original TC is far superior. Personally, after having just seen the longer TC and knowing what scenes specifically have been cut out and cut down For the DC, I can't imagine the film being any stronger without them. Sure, those 15 minutes make a generally slow film seem longer, but I feel they add a lot of substance to the characters. So at this point, I have to say stick with the original TC. Hands down, it's the better of the two.

From what I understand, Revenge has only ever had 3 official releases; the first being in 1998 and in a dreadful and completely not worth your investment 4:3 Full Frame, another is the long out of print double-sided DVD that features both the Full Frame (and) the Widescreen version and then The Unrated Directors Cut Blu ray released in 2007. But there's a problem. Amazon has them all listed as 124 minutes, and all with a 2.35:1 aspect ratio, even though the 1998 release states it's in Full Frame and the 2007 release specifies it's in Widescreen. So I'm a little lost on how a film can be both Full Frame and Widescreen with the same aspect ratio and how so much can be cut out, but still holds a 124 minute running time? Surely it's incorrect information on Amazon's part, but I'm surprised it hasn't been corrected yet. I'll give you a quick heads up though. Avoid The Unrated Directors Cut. Much like with The Directors Cut of Donnie Darko, it doesn't actually make a better film experience; it only sullies it. If you are going to buy it from an online seller, ask beforehand if it contains both the Full Frame and Widescreen version, as that's the only release of the original Theatrical Cut you're going to find in Widescreen. But be warned, this original double-sided release is really hard to come by. In the meantime, I've got some great news! Currently, Netflix is streaming the original Theatrical Cut in glorious Widescreen as we speak!

Remember back in the 80's and early 90's when Tony Scott was the most badass action director in the industry next to James Cameron and Walter Hill? If you were an action fan in Badass Cinema's most prolific period (80's - 90's), chances are you enjoyed a Tony Scott film. There was a time when Scott ruled Action Cinema with his unique visual style, a style that has never been duplicated by anyone else. That is until 2004's Man on Fire, his last great action film until his untimely suicide in 2012. You see, for as many great pieces of cinema Scott has bestowed upon us, he's also given us some films that just don't measure up to his best output from the 80's and 90's. Man on Fire re-ignited our passion for his work after a dry spell with thrillers like Crimson Tide, Enemy of the State, The Fan and Spy Game, films that are good in their own right, just not the balls-out action-fests of his previous work. But then an odd thing happened. With Man on Fire, he started to experiment with a new style of filmmaking, the quick-edit, shaky-cam syndrome as I like to call it, and I just was never able to enjoy a Tony Scott again after that. It just never seemed like he was able to recover from this unusual change in his visual style. Though it's minimal in Man on Fire, it was annoyingly over-indulgent in his next film, Domino and from then on. Thankfully though, he's made some outstanding entries in the world of Badass Cinema in the heyday of Action.

A visually stunning masterpiece that oozes cool from beginning to end. Often times brutal and violent, but also a well crafted suspense thriller that has remained one savagely underrated gem in the "Revenge Thriller" genre, this  Quentin Tarantino has often cited this as her favorite Tony Scott film, which is what led Scott to directing Tarantino's script for True Romance 3 years later. Ignore the tacky and lame cover art (unfortunately a Tony Scott staple), and immerse yourself in the best revenge thriller you've never seen. YOU NEED TO SEE THIS MOVIE!
Posted by robotGEEK at 2:13 PM