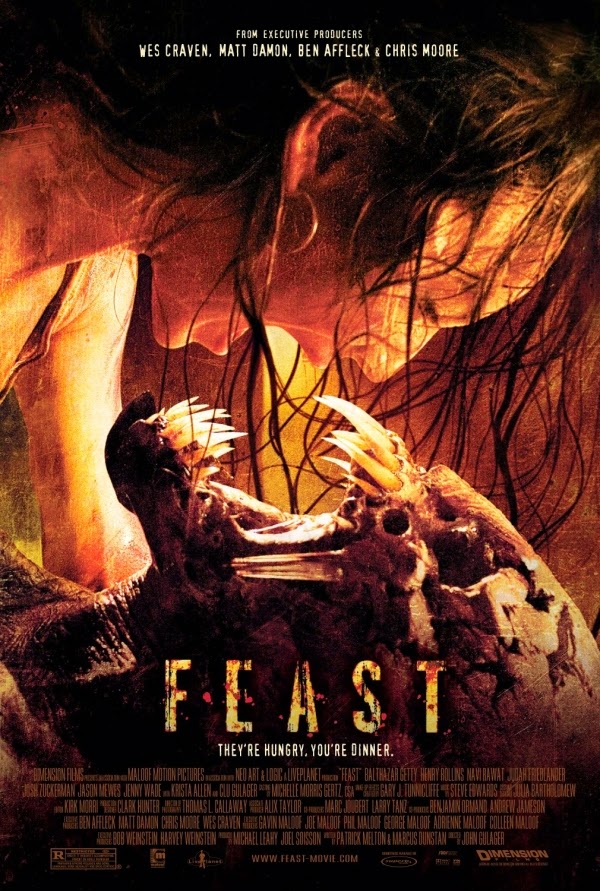 Back in 2005 producers Matt Damon and Ben Affleck had a reality show called Project Greenlight, basically an insider's view into movie-making about the production process of a film. From what I understand, the first two seasons offered ho-hum results, that is until they decided to focus on the horror genre in season 3 and finding a film that could give their Project Greenlight a little boost. That film is Feast.

Before I get into any specifics, I feel it necessary to at least give it a positive or negative mark right upfront because you're probably wondering whether it's good or if it sucks. The word on the street was that this was good, and I can only wholeheartedly agree. Feast was one helluva good time.

Released in 2005, I only started becoming aware of it just a few years ago because the guy who wrote it, Marcus Dunstan, kinda blew me away with The Collection, the sequel to his slasher-in-a-house horror film The Collector. If you you love old school slasher horror and haven't gotten a chance to check either of these out yet, I strongly urge you to as soon as possible. The Collector is a good introduction, but The Collection is where it's at, easily being one of the best new slasher films to come out of the overpopulated horror genre in the last 15 years. Ever since then I had been wanting to see what else he was responsible for, and I soon learned that while he's only directed The Collector and it's sequel, he's been writing regularly for quite some time with some of the Saw films and the first 3 Feast films. Yes, there are 3 of them.

To further my interest in checking this out, Feast was also mentioned in a documentary I caught recently called The 50 Best Horror Films You've Never Seen, a tremendously enjoyable doc about forgotten or under-the-radar horror films. Feast, if I remember correctly, made it pretty high on the list of films that you need to see ASAP, so that coupled with the fact that it's written by guy who killed it with The Collection had me running to my one and only video store in town to snag it as soon as I had the chance.

Late one night in a town in the middle of nowhere a stranger runs into a bar with the severed head of a strange creature he's just killed, warning the patrons that they better be prepared, because a whole lot of them were on their way to wreck some havoc. The rest of the film centers around this eclectic band of misfits trying to fend off an attack of unknown creatures hellbent on entering the bar and killing every living thing in their path.

One of the things you'll notice almost immediately once this starts playing is that Feast has a very playful vibe to it. So right off the bat, you know you're in for a Horror/Comedy hybrid. Now, if you're like me, then that's an immediate cause for concern because let's be honest; horror is easy, comedy is hard. Now I'm not saying horror is so easy that anybody can do it, because it's not, but when you compare horror to comedy, it's a lot harder to make someone laugh than it is to scare the shit out of them, am I right? And so when you combine the two, it's not as easy as it sounds. Trying to find that right balance between horror and laughs and trying not to sway too far into the comedy is something that far too many fail at. Or, try as they might, they just aren't funny. Some get it right though, Shaun of the Dead, House, Tremors and Evil Dead 2, but then other's like Motel Hell do not, and it can be painful to watch.

Thankfully Feast get's it right. The comedy is never too much or over the top, in fact it's quite tame. What throws you off though is the silly character introductions in the beginning. It's a little in-your-face and ridiculous, but once you get past that intro then it's pretty much smooth sailing throughout and what you're treated to is an over-the-top gorefest with some of the most insane and disgusting practical effects work ever thrown on the screen for a low-budget film. Above all else, that's going to be the clencher for most people on this one, because while it's got a pretty killer and large cast, and a mile-a-minute running time, the plethora amount of practical effects work is phenomenal and aplenty.

And you have to hand it to the team behind this one. For a low-budget horror film where the entirety of the film takes place inside a dingy low-rent bar, you'd never expect to have an ensemble cast this size. But the crazy thing is that a good handful of them are literally only in it for a few minutes. I won't spoil anything for you, or even bother with a roster of the eclectic and fairly impressive casting choices as it was a fun experience in itself being introduced to them one by one and picking them out. Kudos to the casting department on that one.

Feast is a fun film, and probably one of the most enjoyable horror films and certainly one of the goriest I've seen in quite some time, but it's not a perfect film either and though I found a "lot" to love about it, there was really only one single constant issue that really kept this from achieving "great" status. For all it's creative casting, impressive effects work and a blink-and-you-missed-it pace, it's director John Gulager who keeps this film from ever getting above low-budget level status. No definable style to speak of, and an annoying freestyle hand-held method of moving the camera that lacks any kind of style or in the least, a visual punch. Again, I know I say it all the time, but dude, if you're going to spend so much money making a film, why not give it some pizzazz? As I'm sure you've noticed, I can't help but call this a low-budget movie, because it looks and feels like one. Yet sadly, that could have been easily fixed had Gulager not made it "look" low-budget and shot that damn thing with some style. Surprisingly though, that's really it in the complaint department.

My one issue aside, Feast has so much going for it overall. Visually uninspired, but artistically and on a technical level, a knockout of practical effects work, an impressive cast and a breakneck pace that keeps you fully invested from beginning to end. Think the second half of From Dusk Till Dawn and you'll know what I mean. Seeing as the same team that brought us this one are also responsible for it's 2 sequels, I think I really have no choice but to see if they live up to the original. To be continued....
Posted by robotGEEK at 1:13 PM