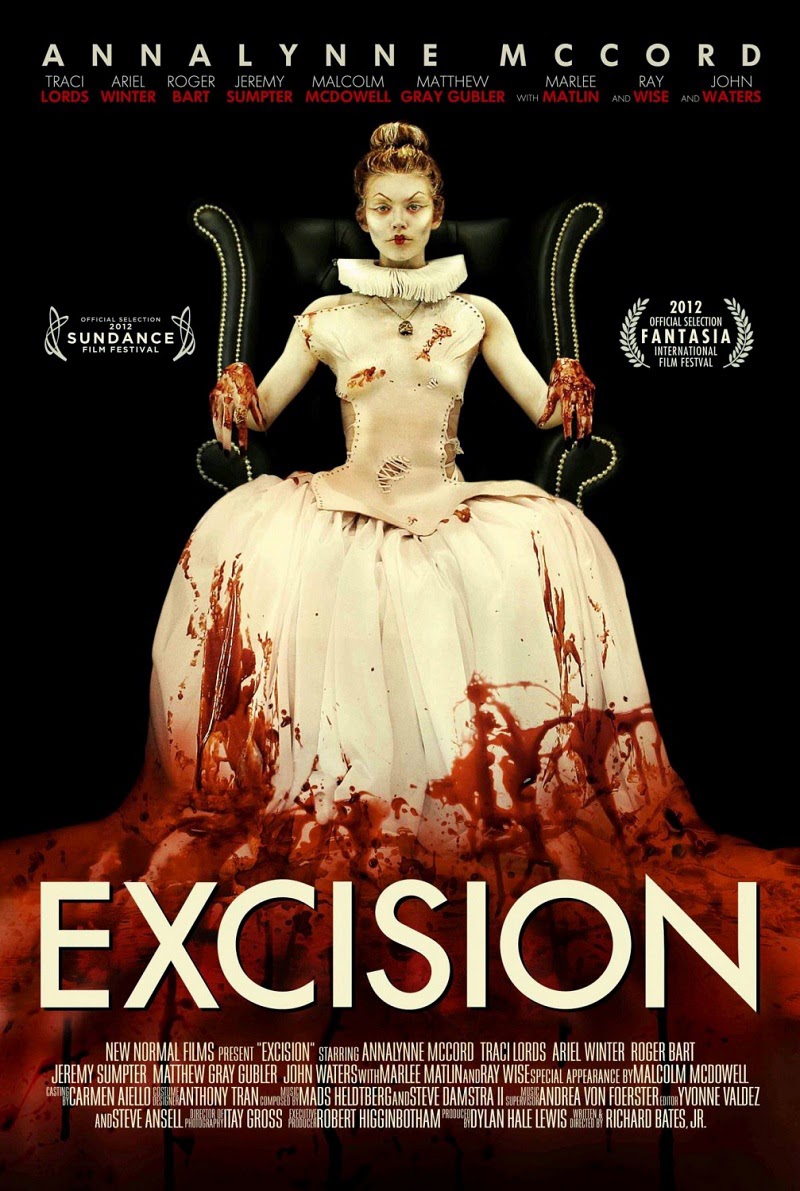 I see a lot of films on a regular basis. You can assume I have no life and am a rather dull person, and you may be right. But movies are my passion, my escape and my own personal form of meditation. I watch so many in fact that I often find it hard to pick which ones I will take the time to write about. As I easily have about 8 other films in my blog list waiting to be finished from the past few weeks, having just seen this particular film the other night, I feel compelled to let as many people as possible in on a little secret. That secret is that Excision is probably one of the best, most refreshing little horror/drama/thriller's you haven't seen.

That's a bold statement, I know. But it's true. Even if this film is not your cup of tea, and is surely won't be for everyone (more on that later), you have to admire the guts writer/director Richard Bates Jr. has for putting this thing together, and as well as he has. Already with a preconceived notion of what kind of film I was going into, Excision was the complete opposite of what I was expecting....and the more I think about it, the more I feel that that is a great thing.

The closest thing I can compare Excision to is Donnie Darko, writer/director Richard Kelly's brilliant sci-fi/drama/thriller/coming-of-age hybrid from 2001 that literally blew my mind, with hints of NBC's amazing Hannibal television series. Except Excision would be much gorier and darker playing with completely different ideas. I compare it to Donnie Darko more than anything because of it's style and overall vibe. While the subject matter is pretty fucked up, the way writer/director Richard Bates Jr. gives the film an almost playful and light vibe that takes you by surprise. This isn't the film I was expecting to see and it's all the better for it.

Paline (AnnaLynne McCord) is an 18 year old high school student has absolutely no social skills, friends or need/want to fit in. Her desire is to become a surgeon, which slowly becomes an obsession. She lives in an upper class environment with her over-bearing mother (Traci Lords), submissive father and sister who suffers from Cystic Fibrosis. Pauline's delusions of becoming a surgeon often manifest themselves into blood-filled sexual fantasies that often appear to be the only way she gets sexually excited, which becomes even more apparent during her first sexual encounter. Everybody thinks she's weird, but nobody knows how far she's willing to go to fulfill her desire to become a surgeon until it's too late.

I had first caught wind of this film when a site (Cult Movie Mania) I regularly follow sent out an email newsletter about this film. I have to tell you, when they push something they really sell the shit out of it. I've purchased or seen several films I'd never heard of before simply based on their suggestions and reviews alone. From what I remember, CMM was really pushing the gore aspect of this film, but I think what surprised me more than anything is that it wasn't nearly as gory as I was expecting. Yes, the gore sequences are just nuts and visually artistic and reminiscent of most of the gore sequences from the Hannibal TV series, which is just great by the way. But what surprised me was that the film doesn't go there as often as I was expecting. Whereas I was expecting a full throttle blood-and-guts assault, I was instead treated to a stylish, yet disturbing look at suburban teen life through the eyes of an insane and delusional teen girl. And I have to admit, it was pretty fucking great.

The little reading up on this I did beforehand didn't prepare me for how different and thoroughly entertaining this little film was. Since it's going on 2 years old now and I'd never heard of it until now, I was almost expecting a shot-on-video low-budget quality with a bunch of no-name actors. And the cover art above, while amazing, is not the original cover art I had seen, which was a little more subdued and not as artistic. So right from the beginning I'm already kind of thrown for a loop, and then for the next 30 minutes or so, what kept shocking me over and over was the amount of cult figure icons and other notable actors that appear in this. Traci Lords as Pauline's extremely religious overbearing mother, John Waters as Pauline's pastor and therapist, Ariel Winter (Modern Family) as Pauline's ailing and good-natured sister, Malcolm McDowell as Pauline's teacher, as well as Ray Wise (Twin Peaks), Marlee Matlin, Jeremy Sumpter (Frailty), Mathew Gray Gubler (Criminal Minds) and Roger Bart (Hostel: Part II). Every few minutes I felt like I kept yelling "They're in this?!". But what I think will shock most people more than any of these great actors is how good Traci Lords is in this. No one was more surprised than me, and when you have a film filled with credited professional and character actors and you walk away stunned by Traci Lords performance, then you know you're in for something special. She was phenomenal. And that last scene of the film with her; just......wow.

Before this, I had never heard of AnnaLynne McCord. In fact, I assumed it was some new no-name actor who they found through a casting call or something. I should have been known better though, this actress was too good as the strange, awkward and confident Pauline, even under all that makeup to make her look as unflattering as possible. Apparently, if you follow teen shows or primetime soaps, she's well known as she's starred on rebooted dramas like 90210 and Dallas. Her delivery was spot on and really good. And I knew whoever was playing the part couldn't actually look that bad, but when I did some searching and saw what McCord really looks like, I was flat out shocked at how gorgeous she is compared to her character under all that makeup. Kudos to the makeup department on that one.

Despite being unique in its own right, what will set this film apart from many others are the dream sequences. Or rather, the fantasy sequences. These are the images young Pauline plays out in her head when she's getting off alone in bed, or during her first sexual encounter with a young lad, or when she's dreaming. These images are what I actually thought the film was going to be about for the most part, because that's what a lot of other reviews on sites like Netflix and IMDB had commented on; how sick, grotesque, twisted and disgusting it was. So you can imagine my surprise when I discover this film actually has structure, less gore than I was anticipating, and it tells a pretty straight-forward story, albeit a twisted one. And on a technical level, these fantasy sequences are simply stunning. Disturbing for sure, especially the abortion one, but there is so much to admire when you look at all of them. Visually they're on par with anything Hannibal the series has been able to conjure up, and if you want to see blood and nonsensical gore, these sequences will satisfy the gore-hound in you. And it's with these particular sequences that I struggle with. On one hand, these images are so stunning and twisted that I kind of want a whole entire film that looks and feels like that. But on the other, I also love how this film ultimately played out because it was so good and surprised me in so many ways, not least in it's competency.

If there is one single complaint I have, and believe me, it was hard to find one, it would be it's running time. It's too damn short, barely clocking in at an hour and 18 minutes. When most films have a standard hour and a half on the short end to tell a story, this one feels like it's just too short. In hindsight, it get's the job done and maybe it only needed an hour and 18 minutes, so I guess my complaint is really that I enjoyed it so much that I wanted more. For me, Excision gleefully excels and succeeds where other recent notable low-budget indie horror films like American Mary and Nurse 3D have failed.

Posted by robotGEEK at 7:47 PM