Why Walter Hill's Another 48 Hrs. is one of the most underrated and BEST Action/Buddy films to come out of the 90's 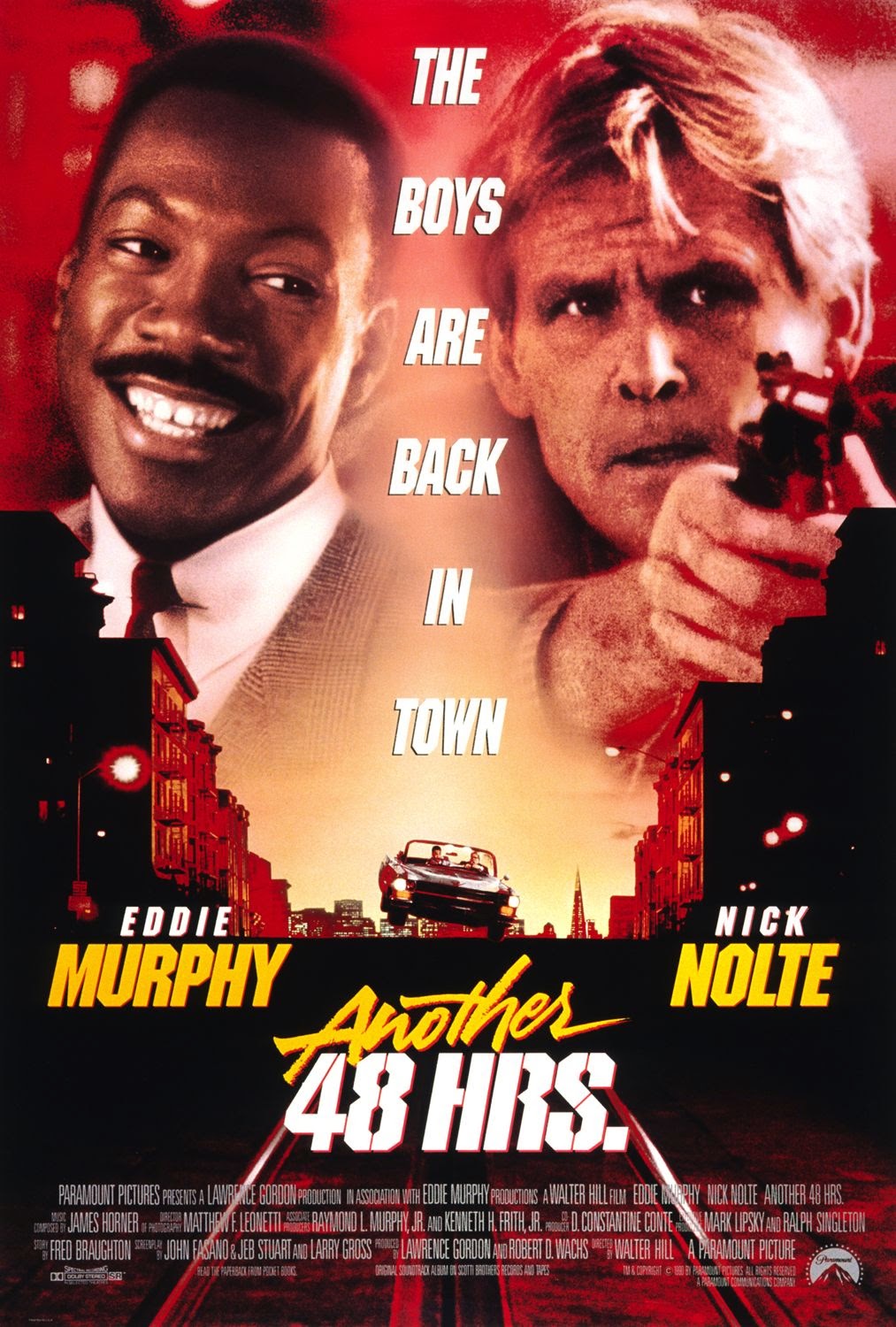 Let me just get this out in the open first before I go any further. Another 48 Hrs. has got to be one of the most badass, underrated, testosterone driven action films to ever come out of the 90's. As many times as I've seen it, I have yet to find anything I don't like or love about it. In my humble opinion, it's quintessential Badass Cinema material. Seriously people, despite some comedy for good measure (It does star Eddie Murphy after all), it's a straight-up tough as nails hard-edged piece of 90's Action Cinema if there ever was one.

Recently I decided to check out the original 48 Hrs., the 1982 film that catapulted Eddie Murphy from Saturday Night Live regular to superstardom. You know, it's a great film. If you're ever in the mood for some good old fashioned 80's action/buddy cinema, you just can't go wrong with 48 Hrs., a prime example of why director Walter Hill is a legend in the field of action, having been responsible for some of the best and most notable action films in the last 30 years.

Comparatively, 48 Hrs. and it's sequel Another 48 Hrs. are quite different from one another. The 1982 original, while drenched in an early 80's aesthetic, seems to play more for laughs, which was more common then than it is now. It was also the perfect vehicle to showcase Murphy's comedic chops and timing. Beverly Hills Cop a few years later would cement his status, but 48 Hrs. was a helluva good start. Not to say it's a comedy like say Coming to America or Beverly Hills Cop, but it's pretty damn funny and I found it to have more comedy than action at the end of the day. It's sequel 8 years later takes a different approach. Rather than being a carbon copy of it's predecessor, Another 48 Hrs. can only be described as 48 Hrs. on steroids. It hits the ground running right from the opening credits and literally does not let up until it's fantastic showdown at the end. And while they throw in a few good one-liners here and there, it's nowhere near as funny as the first one, which is a good thing. It's over-the-top let's just blow shit up and quadruple the body count at any given turn approach is what makes 90's Action Cinema what it is. While there are other prime examples out there (right off the top of my head, Tango &amp; Cash), few turn out as badass, as full-tilt balls to the walls awesome as Another 48 Hrs.

A few things have changed since the original. For one, Eddie Murphy is now the lead actor, where as in the original Nick Nolte was first billed. By the time another 48 Hrs. rolled around, Murphy was the biggest movie star on the planet and one of the biggest box office draws with his star power quickly fading as his directorial debut Harlem Nights was a major flop the year before. Producing Another 48 Hrs. under his production banner Eddie Murphy Productions didn't do anything to raise his success rate either. While a solid box office hit, even by today's standards, earning $80 million, sadly his star only started to fall with each film after this. Not until 1996's The Nutty Professor remake, was he a bonafide box office draw. Even then, his output was extremely spotty to say the least. For every Shrek and Dr. Doolittle, there were plenty of Holy Man, Showtime, Life and The Adventures of Pluto Nash's in his resume. But anyway, I'm getting off topic.

Now, I don't want to make it seem like this film redefined the genre or anything, because it doesn't. In fact, in a lot of people's eye, it's not very good or, depending on what review you read, not a very good sequel altogether, which I've never understood. It is a both a great action film and a superb sequel, often eclipsing the original in so many different ways. It's not a perfect film, and if you sincerely care enough, you can probably pick it apart. Currently holding a 5.7 rating on IMDB (average), and only holds a fresh rating of 36% on Rotten Tomatoes (pretty low), it's not the kind of film any action lover thinks of when trying to come up with a list of their favorites. But guess what? It's a good fuckin' action movie plain and simple.

Overall a much harder and brutal film than it's predecessor. Director Walter Hill, a hit-or-miss director for me; especially in the late part of his career, has infused this film with so much hard-edged style and testosterone that I certainly consider it one of his best films. James Horner, once again channeling his trademark sound from some of his previous films like 48 Hrs. and Commando, kind of rehashes that same distinct sound again with this score, only marginally changing it up a bit. But it works effectively well, adding a little thunder to the storm.

It's really Hill who's the driving force behind why so much of this works. Known to change up his style from film to film, it's with this film where he combines his straight-forward hard-edged style of previous films like Red Heat and Extreme Prejudice with the more freestyle visuals of his later films like Trespass. I'm not generally a fan of the freestyle approach, especially when it comes to Walter Hill. In his later films like Trespass and especially Wild Bill, it just comes off as something new he's trying that doesn't quite work. Thankfully though, it's extremely minimal in Another 48 Hrs. and barely noticeable. But it is there.

By no means a game-changer or an action film that redefined the genre. But at it's core, a rock solid effort in the action/buddy genre that begs, no screams an opportunity to be revisited.

Posted by robotGEEK at 1:27 PM