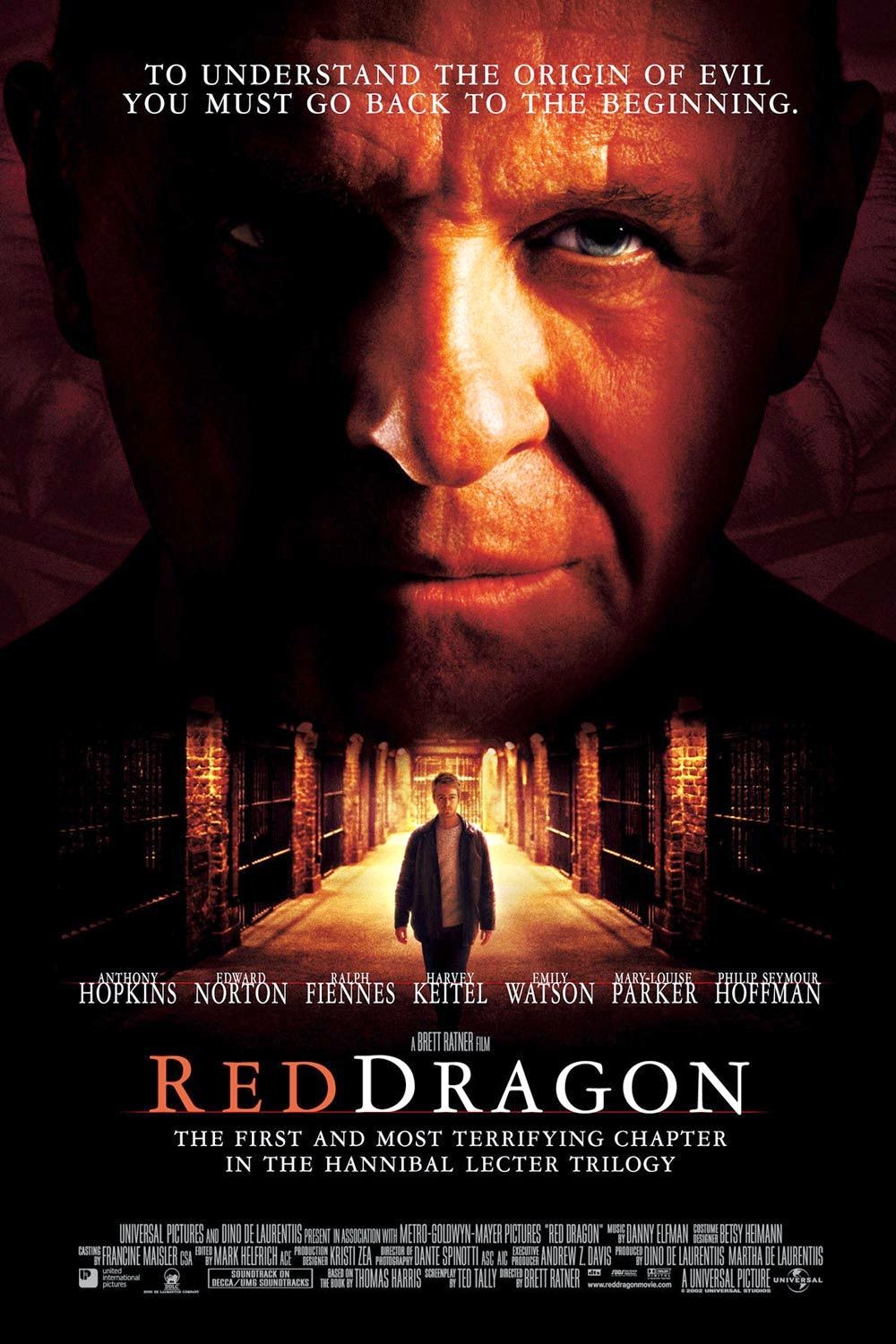 Has anybody actually ever said out lout that they love Red Dragon? Sure I've heard that plenty of times when referring to Silence of the Lambs or Manhunter (the first Red Dragon adaption), but have you ever heard that said about this mediocre attempt at Thomas Harris's novel? No. Or at least, I haven't. You hear it's good, but that's probably because they have nothing to compare it to.

Above anything else, Red Dragon is an unnecessary bore. Lame, tedious and uninspired from almost every angle, it seems that they felt that the far superior Manhunter (also based on the novel Red Dragon), needed an update as Michael Mann's excellent thriller is steeped in 80's Miami Vice cool. But you know what? With their update, Brett Ratner and company have only proven how much more brilliant, beautiful and entertaining writer/director Michael Mann's original 1986 film is, even with it's mid 80's Miami Vice aesthetic.

It feels like that the studio, or whoever spear-headed this latest attempt, was attempting to capitalize on a film series that was quickly dying. Maybe they also felt that Hopkins wasn't getting any younger, so if they were going to make this prequel to The Silence of the Lambs, they better get on it ASAP. I don't know. I'm just guessing. Regardless, Red Dragon was almost a shot-for-shot remake of Manhunter, just not nearly as stylish, intense or satisfying.

Director Brett Ratner has always been a dull filmmaker to me. He's not a bad one, not by a long shot. But he's not an interesting or exciting one either. Most people either love or  hate him, but I personally just don't care enough to categorize him that drastically. I'll give him some credit though, he's at least consistent. While he's never blown me away with any of his films, he's certainly never made a terrible film. If I had to pick one, I'd say Tower Heist was bottom of the barrel stuff, but I've definitely seen worse by other high powered directors. But my issue would really be that he has no identifiable or distinct visual style. It's just sort of......there. Like, you can't say "Oh that's a Brett Ratner film" like you would with say Tony Scott, or William Friedken or Michael Mann or any other director who has a specific visual style. And as much as people like to hate on X-Men: The Last Stand, I don't find it that bad at all. Hell, it made more money than any of the others. How does that make any kind of sense? But we've come to a point where if you mention his name, it's like "Oh he fucked up X-Men", or "He's a terrible director". I'm not anywhere near those kinds of feelings. I actually quite enjoy X-Men: The Last Stand and even the first Rush Hour. I just feel he's a very uninspired one.

With Red Dragon though, Ratner seems to be firing on all cylinders and trying his best to give us a top notch thriller. And it's really on what your preference is as far as a thriller's overall impact goes. For me, there was just no punch in this second adaptation of Thomas Harris' novel Red Dragon. It all felt very bland, and when you consider how so much of the film is almost identical to Manhunter, with the exception of a few changes of course, it just all feels so damn unnecessary. Manhunter kicks your ass and has one helluva finale that you won't soon forget. Red Dragon, which ends with a different ending that Manhunter, still doesn't do anything to intensify anything. Even the famous "wheelchair on fire" scene is shockingly short, dull and filmed in such a way that it's almost a throw-away scene. Like, you blink and it's over. I couldn't believe how little they paid attention to that scene and how little they felt of it's importance. But you know, that's how the entire film plays out; standard and rushed.

The thing that's most frustrating is that this is a big production. It's got all the bells and whistles that could make a great Hannibal the Cannibal film. Anthony Hopkins is great as always, though he seems to be hamming it up a lot more this time around. And the rest of the cast is fine, with Ralph Fiennes doing okay as The Tooth Fairy Killer. He didn't knock my socks off the way Tom Noonan did in the same role. The effects work is fine. Even the screenplay, by Silence of the Lambs screenwriter Ted Tally is fine. It's just the execution that comes up lacking. If you can't put it all together correctly, it's just not going to work. While Ratner has dipped his hand in a lot of different genre's, Red Dragon was his first attempt at an all-out thriller, and it shows. Maybe had he had a little more experience in the genre, he would have fared a little better. But hey, Jonathan Demme hadn't done a thriller before Silence of the Lambs, and look how well that turned out, winning an Oscar for Best Director. So maybe they thought they could capture the magic a second time, but unfortunately lightning didn't strike twice.

At this moment, Hannibal is my absolute favorite show on television. The goriest, most stylish and unrelenting show that I have ever seen produced, and the fact that it's on network television still shocks me with every episode. It's because of my love for this show, now on hiatus after finishing season 2, that I've wanted to revisit the films again, beginning with the excellent The Silence of the Lambs, which is just as good today as it was the first time I saw it. Next I tried Ridley Scott's Hannibal again; I don't even know where to begin. A much more boring and unnecessary mess than Red Dragon, even with legend Ridley Scott at the helm. If you haven't seen the film Hannibal in quite some time, do yourself a favor and leave it at that. If you want to watch something truly excellent that far surpasses the quality, shock value, visual panache and intensity of both Red Dragon and Hannibal the film, you need to watch NBC's Hannibal the TV series. It is the BEST show on television, bar none. You can currently watch the entire first 2 seasons for free on Hulu. If that first pilot doesn't grab you, I don't know what will. Word to the wise, you need a strong stomach to watch it.
Posted by robotGEEK at 2:01 PM