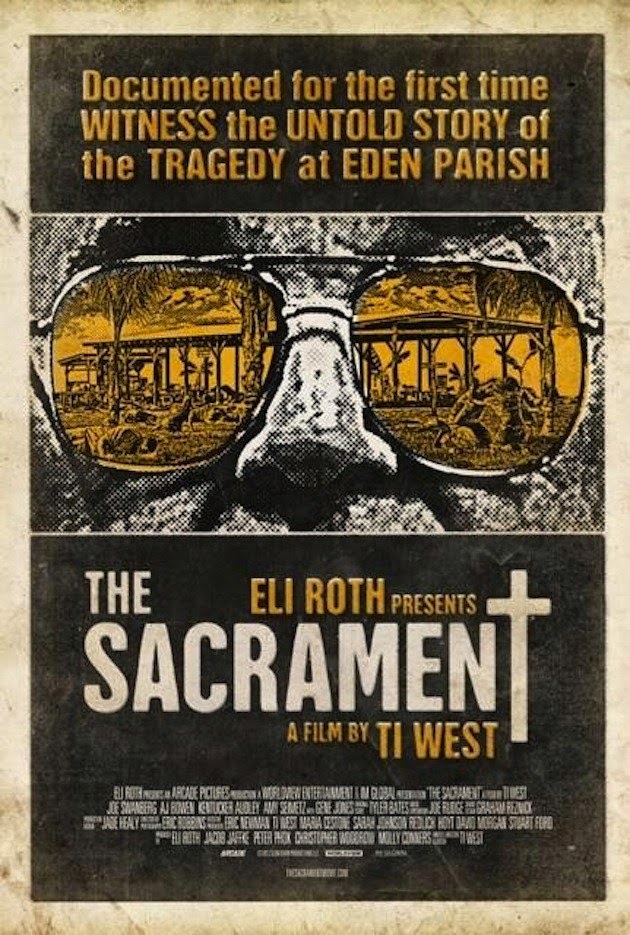 Ti West is a director I greatly admire. I think more than anything, he has a genuine talent as a filmmaker and most importantly, he doesn't like to do the same thing twice. Depending on the type of film and story he's trying to convey, he knows what specific elements are required in trying to get that across into making an authentic horror film. So while he's only made a few films in his short career, they're all vastly different from one another and for this reason alone, he's definitely got my attention with whatever project he's got his hand in. The House of the Devil is still a favorite of mine, and while The Innkeepers didn't necessarily knock my socks off, it was a valiant attempt at a ghost story and made extremely well. There's talent there folks. He might not knock it out of the park every single time, but you can't deny that the kid knows what he's doing.

Which leads us to The Sacrament. I knew basically nothing going into this one, which is usually always a good thing. So on different levels, this one surprised me quite a bit. But I'll get into that in a second. First off, let me just say that this is basically the story about the Jonestown Massacre. Though they don't specifically call the commune Jonestown in this, instead going with Eden Parish. But while the name of the location and characters are different, the story and a whole bunch of specific details about the massacre are the same, so essentially, it's a story about the Jonestown Massacre. Watch any documentary on the subject and you'll know what I'm talking about. How they work that concept into the overall design is a cameraman for Vice receives a message from his missing sister asking for his help. He gets cryptic and mysterious directions to an island where people have left their civilian lives and personal possessions and all live happily ever after in a commune run by an inanely charismatic preacher who goes by the name of Father. With 2 colleagues (a cameraman and his editor) in tow, they go looking for the story of a lifetime and get more than they bargained for.

The Sacrament was better than I was expecting it to be, and nothing like what I was expecting it to be at the same time. But while I wouldn't necessarily call it a horror film, it's got some good tension and a few disturbing scenes that will stay with you. Most of all though, it is in fact entertaining. One thing I've noticed with his films is that he hardly ever uses a lot of blood and gore. While this film is not the exception, there is a little more than what we're accustomed to in a Ti West film, so that was somewhat refreshing. I also wasn't expecting the "found footage" angle, which as you know I HAAAAAATE with a passion. But you know what? It looks like West studied up on all the found footage crap out there and figured out a way to do it creatively that it doesn't really look like a found footage film. Or in the least, you don't want to throw up from the constant shaky-cam like most of those damn movies leave you. Good job Mr. West. Interestingly enough, I found myself wondering from time to time how he was able to pull off a few shots and sequences if it was supposed to be "found footage". And he does in fact creatively explain those instances away. Well done sir.

The cast is littered with a few familiar faces, but mostly a cast of unknowns, which includes the actor who plays Father, Gene Jones. I don't know where they found this guy, but holy shit was he good and made for this role. I just can't explain it any better than that. It's almost eerie how well he comes across in the part. Whether you end up liking the film or not, I think more than anything, you'll walk away in awe of this guy's performance as the Jim Jones doppelganger.

So I'm kind of torn with this one. Since it's essentially a story about the Jonestown Massacre, even going so far as to take lots of specific details about that incident in history and weaving them into the story here, I don't really find it to be an interesting original story. And the "found footage" aspect threw me off initially since he was the last person I would have thought to embrace that lazy concept. But it's got some genuine moments of chills and tension along with a really standout performance by Gene Jones as Father. And believe it or not, the "found footage" angle actually works in it's favor.
Posted by robotGEEK at 3:55 PM