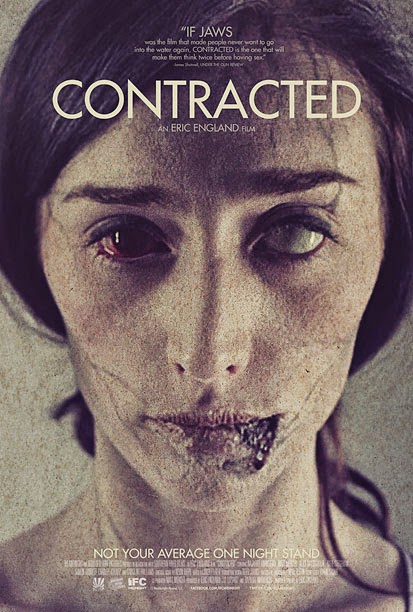 Recently a friend of mine, who loves horror movies by the way, had written a post on Facebook about having watched this particular film and how disgusting it was, which was a good thing. Well, that was all you had to say to pique my interest. I was sold. Streaming on Netflix, I seized the opportunity immediately.

I have to admit, Contracted was a fun, and yes-gross, little horror film. But it's slightly different than your average horror film. In fact, as soon as it was over, my first thought was that this should be a film they show in Health Education Class in all High Schools. Sounds weird, but there's a reason. Contracted's simple premise is basically a girl has unprotected sex with a guy she meets at a party, even though she considers herself to be a lesbian. Soon after strange things start happening to her body as some sort of disease starts taking over. I won't spoil the entire thing for you, but it's pretty disgusting the way her body starts changing that result in a film that ultimately creeps you out and will make you think twice before hooking up with some random person after a drunken night of partying.

So there, now that I've told you that if you like gross-out horror, you should definitely give this a shot. It's a film that will affect you in some sort of way. With that being said, it's not a perfect film and it's got just as many "bad" things going against it as it does "good" things going for it. Let's begin.

The Good:
Considering it's budget, which is very small if you read into the production, it's very stylish and contains a super slick look and feel for a film this small. Impressive is a good word to use because you'd never know it. It doesn't look like a low-budget film. Props to director Eric England for pulling that off.

Among it's strongest assets is it's impressive practical effects work. Seriously, a lot of the stuff you see in here will make you cringe because it's done extremely and realistically well and very effective.

The story; A one night stand where a woman contracts some sort of unknown disease that radically begins turning her into something that resembles a zombie. I think a lot of people can relate to the one night stand part and well, I think this film will certainly make certain people think twice before having unprotected sex with a total stranger.

The Bad:
While a fun movie to watch if you switch your brain off, the plot holes in here are so damn huge that you can't help but get annoyed when it's over. I won't get into the specifics for fear of ruining any plot details, but they are massive and leave you scratching your head.

I think what goes into creating a great story is giving us characters to really root for or believe in. Or hell, just a character to like in general. Unfortunately that cannot be said for Contracted, which is full of some of the most horrible and stupid human beings ever written, including lead character Samantha played by the gorgeous Najarra Townsend. Writer/director Eric England couldn't have written a worse character to have these horrible things happen to. Every situation that she is brought up against because of her transformation is only amplified ten fold and made so much worse by her ability to make the absolute worst decisions possible because of her bratty, selfish nature. Instead of feeling any sort of sympathy for her, you scream at the television screen every ten minutes in frustration asking "What the hell is wrong with you!?".  With the exception of one guy, almost every other character in this film doesn't fare any better. But even he does the most utterly stupid thing imaginable, so he doesn't get off that easy.

It feels odd saying this, but in the end, when it's all said and done and the effects of a fresh fun horror film have worn off, a LOT of things aren't explained and leave you with more questions than answers.

Verdict:
Great effects work. Great camera work. Interesting and promising premise. But weak, annoying and poorly written characters along with massive plot holes leave a lot to be desired. Not quite a home run, but definitely worth a watch for some old school gross out horror.
Posted by robotGEEK at 3:13 PM