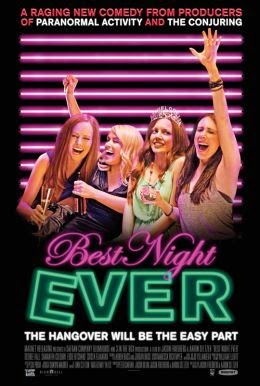 When I sit down to watch a movie, rarely do I ever think of comedies. I do occasionally, but they're not always my first choice. I'm more of an action, horror, sci-fi or thriller kinda guy. But I had come across a quick blurb on this one a few weeks back that basically described it as a female version of The Hangover; meaning raunchy as hell and crazy. This reviewer also stated that it was pretty darn good and a lot of fun. The moment I saw it was available on Netlfix Instant, I jumped on it.

Best Night Ever did not disappoint. Right from it's opening shot, you know exactly what kind of movie you're getting yourself into. Even then, it goes places you never expect it to. I consider myself a pretty open-minded guy. Nothing really shocks or surprises me. But shit, even I found myself with my jaw dropped to the floor on several occasions and flat out shocked at how far they went with this one. It's non-stop hilarious with never a dull moment. But I think a lot of the laughs come from it's shock value, because they really push the envelope in this one. So if you're prudish in any sort of way, then this film is certainly not for you.

I won't get too heavy into this one, other than to say that it's, again, really just a female version of The Hangover, only pushed a little further. And even a bit creative at times, with nods to American Psycho, slasher films, and even Spring Breakers for good measure. Their quick and brief, but if you're a movie buff, you will catch them. What's most shocking more than anything to me is that I can't believe the guys that are responsible for films like the Scary Movies, Epic Movie, Meet the Spartans, Disaster Movie and Vampires Suck did something a helluva lot more entertaining with Best Night Ever, but they did. I just can't wrap my brain around that. But thankfully, they turned out a good one with this and if you like shocks and laughs, you can't go wrong with Best Night Ever.