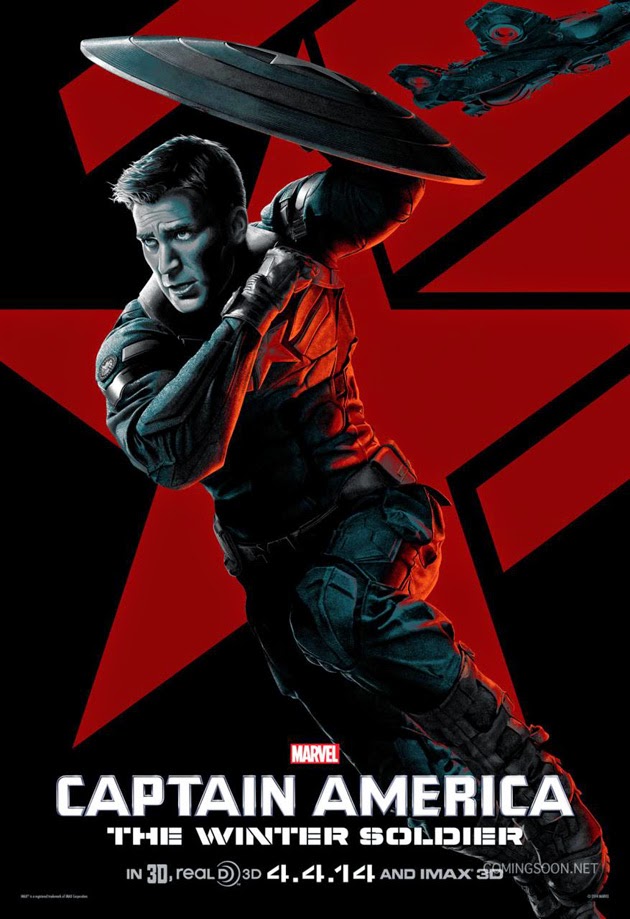 So this one's a long time coming; 2 months to be exact. I had taken a huge break from reviews and in the middle of this long break, I had gone to the theater to see Captain America: The Winter Soldier the weekend it premiered. I know, I know; I never go to the theater. If you know me even in the slightest, it's a big deal when I go pay good money for a film at the theater because I generally don't enjoy it. Crowds are not my thing, nor is having a theater full of screaming kids, annoying teenagers or dumbasses who refuse to stop browsing Facebook on their phones in the middle of a movie. And these movie prices are just getting ridiculous. I would go broke if I went to go see every movie I wanted to when it hit the theater. So 99% of the time I just avoid it and wait for the DVD or Blu-ray to come out. I much prefer to watch movies on my couch in the comfort of my own home. But Captain America was a special occasion. You see, next to The Punisher, he's my favorite comic book character, and while the first film didn't wow me at all, I do understand they needed to establish the character, as opposed to just throwing you into a story already knowing the background of the character. Those first films do succeed in both wowing and entertaining us while simultaneously being an origin story, Iron Man and Spider-Man gleefully succeeded in that area, but it doesn't always happen. Captain America is a prime example of that. Great casting and production value, but I felt it to be too tedious, melodramatic and slow.

But hey, It's Captain America. Flash-forward 3 years later and we have another. I love the new team behind this one, the Russo Brothers, who are responsible for the great and geek-worthy Community series, so I was really excited. Plus, the origin story has been established. Now we can delve into a full-fledged story and make things happen.

Captain America: The Winter Soldier starts with a bang and doesn't let up for the entire 136 minute running time. It's as if writing partners Stephen McFeely and Christopher Markus (The Chronicles of Narnia, Captain America: The First Avenger, Pain & Gain, Thor: The Dark World) took all the criticisms of the first Cap film and decided to just go full-throttle action and excitement. It might also be because this Cap film is set in the present, whereas the first one took place in 1942. Either way, what the Russo Brothers and screenwriters McFeely and Markus have done is constructed a film that, more than anything, plays out like an excellent modern day espionage thriller reminiscent of some classics from the 70's. No joke. It's a weird way to describe it, but it's 100% true. It's essentially a big tale of corruption, double-crosses and sabotage all tied together by the mysterious figure known as The Winter Soldier, who shows up randomly to wreak havoc and seriously fuck shit up. But that's just part of the story, as even though the film is called The Winter Soldier, he's actually just a sub-plot of a much larger story. A lot of other reviewers have complained that he should have been the one and only central story, given that the film is indeed called "The Winter Soldier" after all, but even though he's not, I found the whole thing fascinating and entertaining as hell.

Furthering the films "70's Espionage Thriller" vibe, the Russo Brothers have decided to go the more practical route and tried to go as far as they could using practical stunts and effects work rather than relying on an overabundance of CGI, something that's way too common in these films these days. Lots of car chases ensue and let me tell you, they are awesome. Lots of hand to hand combat and physical fights leave your head reeling. Don't get me wrong, this is not without an insane amount of CGI, because the last act of this is just smothered in it. But there's a difference between needing CGI to actually make the scene or relying on CGI just because it's easier and cheaper than doing it the old-fashioned way. That's where my issues with CGI come in. Director's rely way too much on it when it's completely unnecessary. Yes I know these superhero films need CGI for a lot of these sequences because realistically, there's just no other way to do it. But when you can't even produce a car chase without using it then it's gets to be extremely tedious. It's like certain directors don't even want to try doing it the old fashioned way. Here, the Russo Brothers deliberately take a step back away from the overuse of CGI and use as much actual stunt-work as humanly possible and it shows. Instead of having a CGI sheen all over the whole thing, the film looks and feels organic and it pays off big time.

Every important marvel character returns for this sequel, but I was surprised that Black Widow was basically co-starring in this film. I mean, she's in the entire thing. I don't think that I picked up on how much she would actually be in it in the trailers. So instead of it just being a Cap flick, it's really more of a Cap and Widow flick. And The Winter Soldier was seriously badass with Sebastian Stan really nailing the look and feel of the character. The best thing is that he's just as fast and strong as Cap, which makes for some killer fights.

I've been collecting Ed Brubaker's take on Captain America ever since he revamped the series for Marvel in 2004 and collected every single issue he's done through his end on the series in 2012, which is just a stellar title to get hooked on. The Winter Soldier storyline was created in this series and the film does an excellent job of following it pretty accurately. And as I stated before, Sebastian Stan is just great in the role.

I realize it took  me a few months to finally get this out, but seeing as it's still making a ton of cash at the box office, if you haven't yet experienced this throwback to 70's Espionage Thrillers, you best get your ass to the theater pronto.
Posted by robotGEEK at 9:51 AM