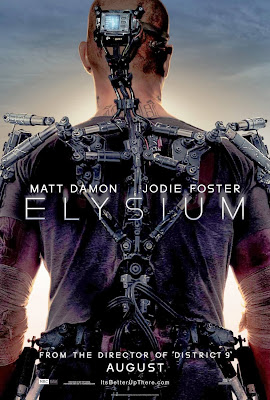 So here's another one of those "critical and fan reaction split right down the middle" type of films. Honestly, after the huge success of writer/director Neill Blomkamp's breakout film District 9, how can you not expect something along the lines of a masterpiece as his follow up? Does he deliver? That's debatable.

For me, Elysium felt more of the same, only on a bigger scale. In some ways it's a bit refreshing, but in others it's sort of frustrating. Blomkamp is a very talented filmmaker, there's no doubt about that. What he was able to pull off with District 9 on a limited budget was nothing short of masterful and impressive. With bigger star power and a bigger budget, I had expected something a little more grande and epic. At least that's what the trailers lead me to believe. Except, as I watched this film, at times it felt like I was watching District 9 all over again. This film certainly exists in that world he set up in that film 4 years ago, only with some minor adjustments. Namely, some serious star power.

Elysium has as many supporters as it does haters. Personally, I think I'm somewhere in the middle. While it didn't "wow" me like I hoped it would, it certainly wasn't a bad film either. My biggest beef with it was that for a majority of the time, it felt like I was in District 9 zone. And though the film took place on both planet earth and on Elysium up in space, it wasn't enough to set it apart from his earlier film. Aaaaand, here's my biggest complaint. Visually, I was severely let down. Yea the effects work was phenomenal, and the design was impressive, but the style didn't grab me like I was expecting it to. I've never been a fan of hand-held camera work, but Blomkamp was one of the few who utilized that concept extremely well. It's a rare thing indeed because not a lot of people can pull that off, but he certainly did with District 9. But with Elysium, it felt almost lazy. Gasp! I know that sounds harsh, and I'm not trying to come off as a dick, but I wasn't impressed in the least by Blomkamp's visual work here. A few standout shots for sure, but overall a missed opportunity when considering what he had to work with.

Bitching aside, there's quite a bit to like about this. For one, while Elysium boasts some big name actors that do what they do best, it's a lesser known name that really steals the show in this; and that's none other than Sharlto Copley. Almost unrecognizable until he starts speaking, Copley was definitely the highlight of the film for me as a mercenary for hire. The funny thing is that I wouldn't even call him tough. He does anything he can to get the job done or to get the upper hand and truthfully, it's all the little gadgets and weapons he uses that actually gets the job done 99 % of the time. Conniving, sleazy and one twisted bastard, he'll definitely leave an impression. I'd have to say I enjoyed his performance more in this than I did in Oldboy, where he played a completely different type of villain. Again, as with Elysium, his performance in that was also a highlight. But the guy is just a scene stealer and rightfully so. Though he didn't start out as an actor in the business, Blomkamp's decision to cast him (a producer at the time) in the lead in District 9 was brilliant. Hell, as much as I dislike the A-Team film, he was even spot-on and badass in that.

I think my expectations were just too high for this one. So maybe it never really had a chance at living up to them. Though I dug the story, it's really Blomkamp's visual style that kind of let me down. I know, I'm nitpicking. But my philosophy is, if you're going to spend the millions of dollars that it takes to make a film, and lose a year of your life working on it, wouldn't you want it to look good? I'll never understand the whole hand-held concept. It just seems lazy to me. Especially when so much is riding on the success of any particular film. I mean, who makes films to lose money, right? Not that it's a disaster or a total loss. Not by any means. It's a solid film put together really well. It's just that for me, yes the story is important. The performances are important. The music is important. The editing is important. But more important than a lot of those things for me, is that it's also visually arresting. It just has to be or I lose interest pretty darn quick.

Ultimately, for me, it's a mixed bag. It wasn't necessarily boring; great effects work, strong performances and a solid effort, but it didn't blow me away like I had hoped. I feel my expectations were too high. I know a lot of people actually love it. Maybe my feelings will change with multiple viewings throughout the years. Maybe it's one of those films that has to grow on me. Only time will tell.
Posted by robotGEEK at 3:15 PM