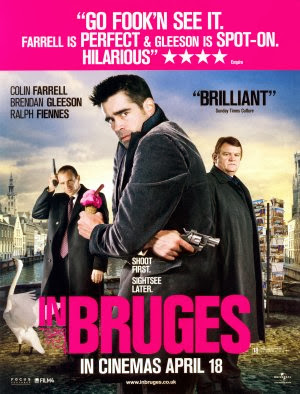 This has been on my radar for quite some time. In fact, I've been told repeatedly by just about anyone who's seen it that I need to see it. That I'll love it. I've always meant to, but it's always one thing or another that keeps me from making the time to actually do it. That is until I saw writer/director Martin McDonagh's recent film Seven Psychopaths, which I really enjoyed, that I felt inclined to finally check this out. If it was anything as entertaining as Psychopaths, then I was in for a treat.

In Bruges, while being a slightly different type of film, was just as entertaining, if not more. Taking a more serious approach than Seven Psychopaths did, In Bruges benefits from some outstanding performances from Colin Farrell, Brendan Gleeson and most notably, Ralph Fiennes. This guy was just fucking killer in this.

I enjoyed this one a lot. So much so that I can't believe it took me so long to finally see it. While it could easily be categorized as a dark thriller, it's also got some genuinely funny bits. But writer/director Martin McDonagh doesn't ever go overboard with the comedy or the lighthearted moments. What I also liked about this was that it takes a while for things to be fully explained. It takes it's time laying all the details out, which is nice. You don't know why they're in Bruges of all places. Especially since Ray (Farrell) is practically in hell there, hating the place with a passion. So bit by bit, the story starts to unfold. Why they're there of all places apparently waiting on orders. What happened that's got Ray so guilt stricken. What's next on the agenda. And that's one of the things I enjoyed about this so much. The fact that they don't just lay everything out for you all at once in the beginning. You're forced to invest yourself into the story and be patient. But believe me, it's well worth the wait.

Overall a fun as hell ride that's about as entertaining as they come. Funny, violent, dark, and often times thrilling, Martin McDonagh's In Bruges is a film well worth checking out if you haven't yet already.

How to see it:
Today's your lucky day. If you haven't already noticed, it's currently streaming on Netflix Instant.
Posted by robotGEEK at 10:30 AM