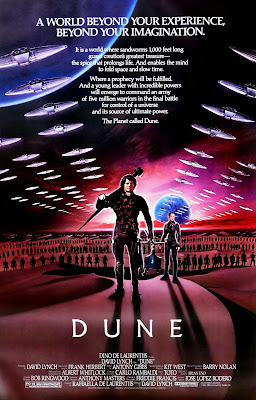 Here is what my issues with Dune have always been. As much as I love science fiction films, and as much as I enjoy a David Lynch film, I have never been able to sit through Dune beginning to end without falling asleep. Not once...ever. I think maybe I've attempted it a good 5 or 6 times in my lifetime, to no avail. I fall asleep and forget about it. I've never read the books, so I'm not a fan in the general sense I suppose. I come into this as the average moviegoer. But I've been immersing myself into Lynch's eclectic filmography for almost a year now, and I've found myself a bigger fan of his body of work than I could ever have imagined. I'm quite shocked actually. And none more so than my experience watching Dune for the first time without ever falling asleep. And you know what else? I thought it was pretty great.

I love sci-fi, and Dune is epic science fiction filmmaking at it's best. First and foremost, it looks nothing like a David Lynch film, to it's credit. I love the way he makes films, don't get me wrong. But with Dune he adopted a more mainstream and streamlined approach and the film quite frankly looks stunning. He takes full use of the films epic widescreen aspect ratio, framing each and every shot with such detail and precision that in all honestly, it looks like nothing he's ever done before. If you didn't already know going in, then you'd never know it was a David Lynch film. But it's the films monster production value that really overshadows anything. The insane amount of detail that's implemented in almost every aspect of this production is astonishing. Sure, not all of the effects work, but regardless, you can see how much work went into creating some these sub-par scenes. Dune is the perfect example of a dying art in filmmaking.

Okay,  now I've never read the books, so I know practically nothing about it's storyline, history, creation or anything like that. I've always found this film to be rather dull, hence the fact that I always fall asleep whenever I attempt it. After finally having seen it, while I wouldn't exactly call it dull, it's a slow film for sure. But I've had 29 years to prepare myself for this very experience. I knew this, after repeated attempts, going in and it helps that I sat down to watch this smack in the middle of the afternoon. For me, in all my previous attempts, besides it being generally slow in a lot of areas, it's the "inner dialogue" that always did it for me. Whispers man. Whispering knocks me right the fuck out. It's weird. And Dune is full of an insane amount of whispering when the "inner dialogue" comes into play, which is frequently. But alas! I made it all the way through and I fucking loved it!

I have to be honest, I'm not sure if I would have been as willing to revisit this film "yet again", had it not been for Francisco's glowing review over at The Film Connoisseur as part of his "The Films of David Lynch" series. It was just the push I needed to get off my ass and give it another go. Immediately after I read his take, I logged onto my Amazon account and ordered the Blu-ray. If you haven't done so yet, I strongly suggest you check out his blog for all of his Lynch reviews that he's tackled recently.

So back to Dune. One of the absolute best aspects of Dune is it's production and costume design. It's done in a way that you can't necessarily say it's in the future, or the past. Drenched in a sort of mix of steampunk, Matrix, Alien and Hellraiser, the costume and set design for this film is amazingly well crafted. The sets in this film are just enormous. Real sets. Real locations. Real stunts. The way they used to make them. Let's be real, we all know that if or when they remake Dune, it will be a CGI orgy-fest. I doubt we'll see any real physical sets and locations that can compare to the magnitude of this original when it's so much easier to "create" anything they want with computers, no matter how fake it may look. This has actually almost come to fruition most recently with both Peter Berg (The Rundown, Friday Night Lights, Battleship) and Pierre Morel (Taken) attached at different times. Fans of the books may feel that we still need a proper adaptation, if that's even possible. It is said that the film is a severely watered down attempt and bringing Frank Herbert's science fiction masterpiece to life. So unless someone with a vision like Peter Jackson or Guillermo del Toro comes along with a planned trilogy of films or something, I doubt we'll ever get a film that will satisfy everyone.

My viewing is based off of the Theatrical Cut. I know an Extended Cut exists, but I've been told unless I've read the books, those extra scenes won't really add to my experience in any significant way. I'm not going to mince words; Dune is confusing as shit. It really is. Narratively, it's a disjointed and uneven mess. You've got "several" different storylines going on which can be hard to follow. Unless you're familiar with this universe beforehand, you're lost for a good chunk of the time. But I went with it and despite not having a clue what to expect, and being confused, I could follow the somewhat coherent story. It helps that they explain as much of it as possible in the opening prologue, omitting huge sections of the book by creating specific scenes to tie things together quickly. I know, travesty if you love the book. I'm sure had I actually read it, I'd feel the same. But as a film experience, it did help things move along a little more smoothly.

There's a LOT of stories about Lynch and his relationship to Dune and a ton of research to be had if you have the interest. I'm not that invested into all this, so my info comes from various interviews and articles I've come across throughout the years. When it comes to films, I have a photographic memory. Taken from different sources, it's so hard to know what's true and what isn't as to date, Lynch refuses to discuss this film in interviews as he's pretty much disowned it completely. It was a pretty sour experience from the beginning. Studio interference and expectations clashed with his artistic vision and ultimately, believe it or not, he regrets making this film. I read in an article once that he only agreed to do Dune if De Laurentiis let him do Blue Velvet immediately afterward. He had never read the books before being offered the job and so if this is true, then I find it rather surprising that producers Dino and Raffaella De Laurentiis would put so much stock in someone who had only done a few small films before being asked to take on a huge undertaking, just so that he could be allowed to make his passion project, Blue Velvet. I've heard he submitted a over 4 Hour Cut, which was then cut down to 137 minutes, making it just over 2 hours. On the Blu ray release though, producer Raffaella De Laurentiis stated that there is in fact "No" 4 Hour Plus Lynch Cut of the film. She says that when he was finished with photography, he submitted an "assembly" of the film that was 4 hours long. But it wasn't a "cut" as it was missing huge chunks of sequences since they hadn't even gotten to the point of shooting effects work yet. That's out of her own mouth. As different and longer versions do exist, none are David Lynch approved or nothing that would be considered a Director's Cut. We can only dream. 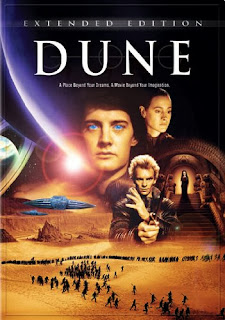 Special Features wise it comes with a few short documentaries that delve into the vast production of Dune with Designing Dune, Special Effects, Models and Miniatures, Wardrobe Design as well as some deleted scenes with an introduction by producer Raffaella De Laurentiis where she flat out states that despite the rumors, there is no mythical 4 Hour David Lynch Cut tucked away in a vault. 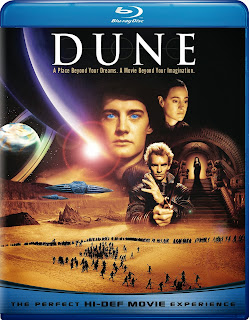 Universal's 2010 Blu ray -
Unless you're a die-hard fan of the novels, your best bet is to pick up Universal's 2010 Blu ray. The picture quality is a vast improvement over their 2006 Extended release, yet even then, some of the night scenes don't come out as clear as you'd expect. It's still the best version you're going to get until they come out with another release in the future. This blu ray only contains the 137 minute Theatrical Cut though.

As far as the Special Features go, it's the same exact ones off of the Extended Edition, so nothing new in that department. With this purchase, it's really the picture quality you're buying more than anything else. Overall, while not up to par with the quality with some current blu ray releases, considering it's a film released in 1984, the picture quality is pretty damn good.
Posted by robotGEEK at 3:32 PM