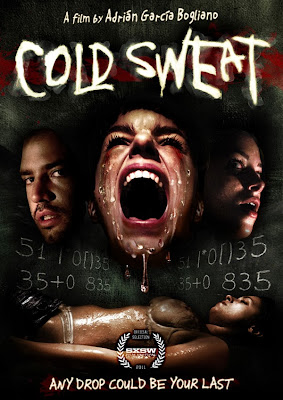 Every so often a film pops up out of nowhere, whether it be foreign or domestic, and really surprises you like a punch in the gut. Sure there are films that you've heard of but have never gotten around to viewing, and then there are films that just pop up randomly that have been around for a few years and it isn't until you take that chance and sit down  to watch something that you've never heard of that you realize that sometimes it's worth taking the risk. Sometimes these risks pay off big time and Cold Sweat, while not perfect, is one of those films for me.

Cold Sweat is a hard film to categorize. With a mix of horror, thriller, suspense, thrills, absurdity and even some laughs, it's kind of got everything you would want for a badass film experience. Thankfully though, it never delves too deep into the absurdity or humor area. It plays out more on the serious side with some pretty nifty effects work and a few good shocks to boot.

Roman and his friend Ali are looking for Roman's girlfriend who mysteriously vanished. Roman hacks into her email and discovers she's been chatting with a guy who she made plans to meet in his apartment. But she's never heard from again until she receives an email saying she's left town. Only Roman and his friend Ali know that the IP address from the email originated from the same apartment that Roman's been stalking in his attempt at finding her. Roman sends his faithful friend Ali in first. When she also disappears, he enters, only to discover a literal house of horrors.

SPOILERS!!
So what we discover once anyone enters this apartment is that there are two old men who have a penchant for torturing young people. Why? Because they feel society is a disgrace and it's because the young are stupid and it pisses them off. So they want to torture as many of them as possible since they are vulnerable enough to fall for a stupid prank like meeting someone online and actually agreeing to meet them in person even though they don't really know them. Really, that's what it boils down to.

In the beginning of the film it's hinted at that these two old men once belonged to an extreme radical group in the 70's (I think?) and a ton of explosives went missing. Unfortunately, while that is brought up later in the film, it's never really taken full advantage of. The beginning montage is pretty cool, and leads you to believe that will somehow come into play in a big way later, but it doesn't.

When it comes to torture, they choose to use liquid forms of explosives to do the job. Sometimes it gets creative, but then others it gets downright silly. At one point one of the torturers says "Why don't we just shoot them? It'll be easier and faster". Towards the end you start to wonder the same thing. But that's not to say the film isn't a hoot, because it is. It's just ridiculous for the most part. For example, how did these two old geezers subdue all of these young people? One of the guys can barely walk. How is it possible that even an athletic woman can't get the upper hand with this guy? And instead of immediately calling the cops when his friend Ali entered the building and never came out, Roman decides to enter himself and this guy is anything but a hero. So many missed opportunities where he could easily have taken on either of these guys to save the day are wasted and you end up yelling at the television in frustration. But, despite a lot of these gripes, it's a fun film. It really is. Silly, but fun. You just have to remember not to take it seriously at all and you'll have a great time with this.

When the credits began to roll in the beginning and I saw writer/director Adrian Garcia Bogliano's name, I knew it sounded familiar. A few months back I had seen a trailer for his newest film, Here Comes The Devil, and it blew me away. It literally gave me chills and have been aching to see it ever since then. So when I saw his name attached to this, you can say my expectations were a little high. Though to be fair, just based off of the trailer I had seen for Here Comes The Devil, Cold Sweat took me a little by surprise by it's tone. A completely different type of film all around, yet made with the same amount of passion implored in his newest film, just in a different way.

Not a groundbreaking film by any means, but a straight up fun time made with some genuine talent in getting the most out of every idea thrown at the screen. It's important to note that this film falls square under the "not for everyone" category. I can see how some people just won't dig it. I enjoyed the hell out of it, but then again my taste in films doesn't really flow with most others. Definitely a film worth checking out though, that's for sure. There's a standard DVD release out there that's void of any Special Features. But your best bet is to stream it on Netlfix while it's currently available.

Posted by robotGEEK at 7:12 AM