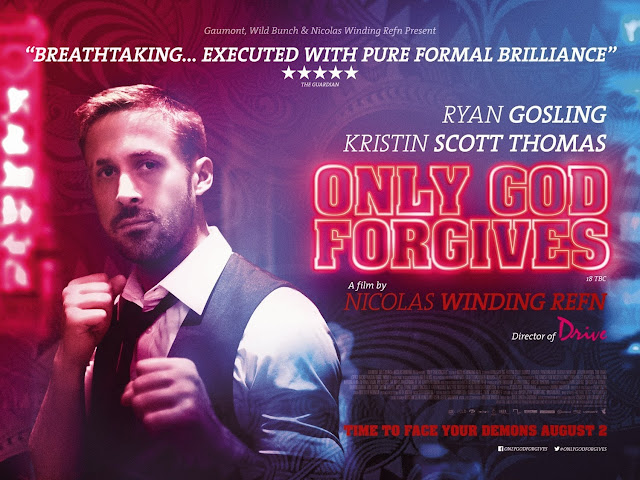 Every so often a film comes out from a great director that divides critics, filmgeeks and the average filmgoer right down the middle. It's not often, but it happens and Only God Forgives is that kind of film. Truth be told, I've wanted to see this ever since the trailers started popping up. But a good half the word of mouth I heard or read was negative, so when it finally became available to rent, I wasn't in any hurry. Only recently did Netflix start offering it through their streaming service so I thought now was a good time as any.

I'm sure by now everybody knows that this is written and directed by the same guy who directed the stylishly entertaining thriller Drive, Nicolas Winding Refn. So with the huge critical and fan success of Drive, you can imagine his ego was a little stroked for the better, and well, Only God Forgives shows that full front and center. It feels like with the success of his last film, he felt could do something any way he wanted, whether the public accepts it or not. Immediately as the film started playing, a good 30 minutes in I could tell this wasn't going to be for everyone. And even for people like myself who are more open to these kinds of experiences, at times it can test your patience with it's insanely slow pace and extremely minimal dialogue.

Though you would never guess it by sitting through the first half, at it's core Only God Forgives is a revenge film, plain and simple. Reading up a bit on it I see that Refn has referenced spirituality and existentialism. I've also read that the character of Chang, the main villain in the film, thinks of himself as somewhat of a God-like character. I didn't pick up on any of that. What I found instead was a film barely trudging along at a snails pace for the first half, with some truly confusing editing choices and sequences that didn't seem to make any sense, only barely coming to life in it's second half when the two main villains try and outdo each other. Essentially, it's a film that screams "style over substance". Rarely is anything ever explained, and when the main character barely utters a single word through 90% of the film, it's hard to understand what motivates him or to honestly even care.

But here's the thing, the film is oozing with style. So if you're a sucker for visuals, this will keep you invested for the rest of the film because quite honestly, this is a beautifully and meticulously shot piece of cinema drenched in an extreme color palate where whole sequences are in just one color like red or blue. Each shot designed to take full advantage of it's widescreen aspect ratio and perfectly executed.........slowly. I know I keep saying that but it's true, things just take forever to happen. Even the "nothing" scenes take forever. You know, when someone is sitting there thinking, or decides to stand up and pick something up with their hands, or is standing in front of a window and then decides to walk away. There are lots of these kinds of films out there, 2001: A Space Odyssey for example, but none has ever felt as pretentious as this. And I may be giving it too hard of a time, but it just seemed like Refn got a little too full of himself and thought, "I'll film it, and they'll watch it and they'll like it". Of course, that's only my opinion, but the drastically slow pace killed what could have easily been a solid revenge film because if you take away my gripes, all of the other aspects of the film are pretty stellar.

What's interesting is that the film is billed as somewhat of a fighting movie. I mean, they keep throwing that in your face with the posters and trailers, but that's not what the film is about. In fact, Gosling has only 1 fight scene in the entire film, and he get's the living shit beat out of him, never landing a single blow. So it's safe to say the marketing is a tad misleading in that aspect. Instead they spend way too much time trying to make this character look like a GQ cover model. What they don't tell you is that when it's all said and done, after the confusing sequences and odd editing sequences are put to the side, it's a straight up revenge flick between Gosling's psycho bitch mother, who's running the family's drug empire, and an ex(?) police lieutenant who acts more like a crime overlord than a man of the law. Oh yea, and besides carrying a sword around and wielding an unlimited amount of power and vengeance, he also dabs in karaoke lounge singing.

On the positive side, one thing you will take away from this is an appreciation for actress Kristin Scott Thomas as Julian's (Ryan Gosling) mother Crystal. Her fierce and disturbing performance in this as the head of a drug empire hell bent on revenge for the murder of her first born son no matter the consequences is probably the best thing to come out of this film. I can't remember the last time I hated a character to it's core more than her character portrayal of Crystal. Even more than the actual villain of the film, Lt. Chang. While Crystal is full of ferocious hatred and energy, Lt. Chang on the other hand is more of the silent killer. Rarely speaking a single word and barely ever moving a muscle unless it's absolutely necessary, he stands with an authority, no matter how big or small his opponent, which makes him all the more scary.

One thing this film provides is some great practical effects work, in the few scenes that call for it. It's great stuff, but you wish there was a lot more of it in here. It feels like there should be, which is the frustrating part. And props need to go to the set designer for giving this film a lavish hip neo noir look that compliments Refn's camerawork so attractively.

Ultimately I'm pretty divided with this one. While it has some great attributes like it's sleek style, haunting score and Thomas's riveting performance, it's seriously lacking in other areas like character development and a decent structure. Too slow for it's own good, this would have been a solid winner if it didn't take forever for things to happen and worked a little harder at giving us a reason at giving a shit about what's going on because honestly, we don't. There's not one single likable character here and add to that the film's self indulgent nature and well, it just comes off as a vanity project that Nicolas Winding Refn probably shouldn't have taken on so soon after his first taste of solid international success.
Posted by robotGEEK at 6:49 AM