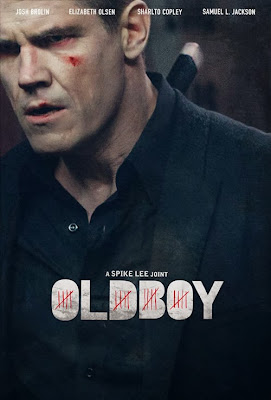 Here's the thing with Spike Lee's Oldboy remake. It's a good solid film if you've never seen the original Korean thriller. Let me just lay that out there before I go any further. If you haven't seen that original film, you will most certainly enjoy this one. Personally, I don't feel a remake is necessary or warranted, especially since the original is available pretty much everywhere, including Netflix's streaming service. So for my buddy and I, the real reason we hit up our local theater for Discount Tuesday was to compare the two, plain and simple.

Now, as far as remakes go, is it a great one? Not really, but it's got some strong performances, a decent structure and a solid ending that will leave the uninitiated Oldboy filmgoer satisfied and maybe even a little shocked with it's ending. But! If you "have" seen the original, this is pretty much another needless remake that doesn't really add anything extra to the table to warrant a remake from a film only 10 years old. Even with the inclusion of Spike Lee behind the camera doesn't do the film any favors really. An odd choice for sure, but if you look at his filmography, Lee can certainly deliver a good solid thriller. Remember Summer of Sam? Unfortunately, there's nothing that screams Spike Lee with Oldboy in terms of style. A few cool stylistic shots are overshadowed by really basic and uninspired camerawork that makes you feel like any Tom, Dick and Harry could have made this.

What's difficult to pinpoint exactly is why this isn't nearly as good as the Korean original. All the basic elements are here, and even in the violence department, Spike Lee's Oldboy has a healthy dose of graphic carnage. Obviously making a few changes to justify an American remake, and even hiring a grade A filmmaker like Lee to helm, it can never escape the feeling that it's still a watered-down version of Chan-wook Park's 2003 cult classic. They just make films differently over there, for better or worse. But in Oldboy's case, Park's razor sharp visuals and penchant for extreme brutal violence make it a standout. In Spike Lee's version, there' just no real flavor to his style. It's just sort of ......there.

That's a hard pill to swallow for one, it being a Spike Lee film, and two, that they had an opportunity to create something really awesome, especially considering it's subject matter, yet were unable to fulfill. Even the famous hammer sequence felt watered-down compared to it's source material. Though I will say it was an impressive sequence nonetheless with Lee shooting it all in one single take. For Brolin's part, that looked like a helluva lot of choreography to learn. While I'm on the subject of Josh Brolin, I should take this chance to give some props out to the guy for delivering the goods. I mean, never really being one of my favorite actors, he can certainly hold his own when given the right material. Here he's so good at playing a completely unlikable character from beginning to end. Doesn't matter that he attempts to redeem himself, he's still just a horrible human being that even when he's given the ultimate payback, you still don't really feel bad for him.

To the films credit, the performances here are top notch. Brolin is always solid, Elizabeth Olsen was surprisingly effective and really damn cute, Samuel L. Jackson always leaves an impression, regardless of how small his role is in any film, but the standout for me this time was Sharlto Copley as the guy pulling the strings. It's no secret he ends up being the ringleader of the events that take place, so I'm not spoiling anything for you there. But I enjoyed his unusual take on the character. Everything from his mannerisms, his voice, the way he dresses; you can tell it was thoroughly researched to create a unique take on this type of character and I felt he succeeded. He's a really great character actor and I wish I could see him in more things.

File this one under Needless Remake.
Posted by robotGEEK at 11:07 AM