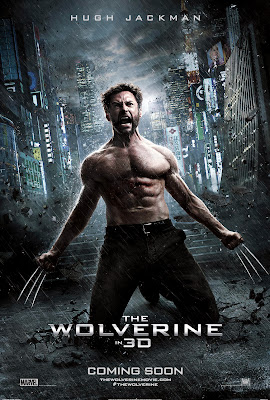 So this was a total surprise, in that it ended up being really good and even exceeded my expectations. Not being a huge X-Men fan myself, though I did collect their comics in the 90's when Jim Lee revamped the series for Marvel and again when Joss Whedon and John Cassaday did the same around 2004  with Astonishing X-Men (a great comic). I also remember owning the original storyline way back in the 80's by Frank Miller of which this particular entry is based on. My memory of that particular comic is fuzzy at best, but I remember it being pretty badass and loving Miller's hard-edged approach to the material. So I was excited to hear that's what they would be basing this film on and that early on Darren Aronofsky would be at the helm. Of course the directing duties ended up in the hands of James Mangold (Cop Land, Identity, Walk the Line, 3:10 to Yuma, Knight and Day), who's always been a hit or miss director for me. He's done some great things for sure, but he's also done some stuff I'm just not a big fan of and so with hearing he would be the one ultimately directing The Wolverine, I was nervous to say the least. And so when the trailers finally started coming out my feelings were only magnified as I just didn't seem too keen on getting my ass to the theater to see this. It didn't "wow" me like I hoped it would. So it's on Blu-ray now and I finally made myself sit down to check this sucker out. Did it bore me to tears like I assumed it would based on those trailers?

Absolutely not. In fact, The Wolverine is a straight-up, intense, super-charged tale of a lost soul struggling with his identity, loss, loyalty and his constant struggle to do what's right. Jackman, to his credit, nails the part with zero effort. The guy was born to play Wolverine. Even though there's been talk and questions of whether he's ready to hang up the claws (to date, he's already filmed X-Men: Days of Future Past and has signed on for another Wolverine film), and no matter how many other films he does, he is Wolverine. 'Nuff said.

So, one of the things that impressed me almost immediately was how stylish this film is. You certainly can't pick up on that by watching the trailers. Not sure why though, but in the context of a trailer certain scenes just didn't do anything for me, which didn't get me very excited to see it. But in the film, well all my worries about having Mangold behind the camera were put to bed almost immediately. This film is slick. In fact, I dare to say Mangold's most visually impressive film to date. Would Aronofsky have done any better? Oh it's hard to say these days. The guy seems to switch up styles as frequently as Mangold does, but I think I would have liked to see Aronofsky go with his real/gritty/Black Swan/The Wrestler style with this one. That could have been a pretty great unique superhero film indeed. But Mangold films with a slick restrained style here. It suits the material well, more so since the majority of the film takes place in Japan. I tip my hat to you Mr. Mangold. Stellar job.

The effects work in here is pretty outstanding. Even that ridiculous train sequence that they showed in the trailers that reeked of X-Men Origins: Wolverine quality, comes off so much better in the finished product and actually ends up being a highlight of the film. Silly, ridiculous fun, but damn if it wasn't badass and thrilling. Same goes for the epic robot samurai showdown at the end of the film. Great stuff. If there was anything to complain about, it would be that for a long stretch of the midsection it slows down significantly. But that's nitpicking, because despite this, it's never really boring. It's building up to a strong finish and it certainly delivers.

The Wolverine is a much better film than I was expecting. Did it need to be in 3D? Absolutely not. I didn't notice any scenes or sequences that could have benefited from that format at all. It didn't seem to be in Mangold's thought process as he filmed this; more like an afterthought on the studio's part. Regardless, a fun film and a vast improvement to the legacy of the character of Wolverine. This is definitely one worth checking out.
Posted by robotGEEK at 5:30 PM