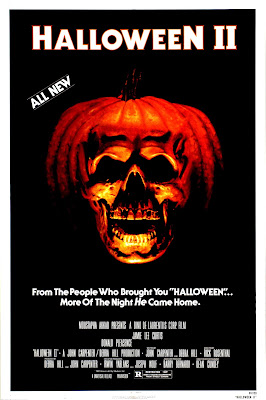 As many of these Halloween films I've been devouring this past year, I'm surprised it's taken me this long to finally catch up to this particular one. In a cheesy sorta way, I suppose you can say I saved one of the best ones for last? *winks eye. Having only ever seen it one time, when it was originally released (yes, I'm that old), my memories are extremely fuzzy on this one. I do remember it all took place in a hospital, and that though Carpenter and Hill returned to write, Carpenter himself did not return to direct, instead leaving the directing duties to Rick Rosenthal. Yes, even waaaaay back then, I knew this was the case. I really should be in film school. Even as a child my knowledge of useless film trivia is pretty incredible.

When Scream Factory released a Collectors Edition of this this past year, I became even more intrigued. If they took an interest in this title, then there's got to be something there. I mean, having never seen Halloween III: Season of the Witch before, I was intrigued only because they released it recently in a Collector's Edition also. And boy were they spot on with that one! I loved it! With Halloween II, I saw this one about 2 weeks ago and have been processing it ever since. The more I think about it, the more I like it.

Halloween II takes place literally minutes after the events of the first film, with the majority of the film taking place in the hospital where Laurie Strode is being held after being attacked by her brother Michael Myers. Only at this particular time, she has no idea he is her brother, only barely finding that out later in this film. All the major players have returned with a few interesting additions like Lace Guest (The Last Starfighter) and Leo Rossi (Maniac Cop 2), and for the most part, piggy-backs off of Carpenter's original classic extremely well. As far as slasher films go, this is Grade A top notch stuff and I couldn't have been more entertained than I already was with this.

I'm not sure what compelled them to give Rosenthal the directing gig; nothing before this suggested he could tackle such a big undertaking or a sequel to one of the biggest blockbusters of all time. I mean, before this, he directed an episode of Secrets of Midland Heights the same year. That's it. But overall he did a solid job, keeping the look and structure of the film as close as possible to Carpenter's unique style. My biggest complaint though would be that while it was a solid effort, his use of the steadicam is pretty unimpressive when compared to Carpenter. No more evident than in the first 30 minutes, which is a shame because when you want to try and grab an audience visually, it's usually the beginning of the film that you want to try and accomplish that. But as the film progresses he relies less and less on this technique and as the film plays out, you can see some truly artful camera techniques implored and a sharp visual style that elevate this particular entry leaps and bounds above the rest after Part 3. Odd though when you realize the legendary DoP Dean Cundey, who helped make this steadicam such a powerful tool in the first film, returns as the DoP once again, but with barely a flicker of the bravura he implemented before with the previous film 3 years earlier. Strange times my friends.

Largely being sedated with drugs and confined to a hospital bed, Laurie Strode isn't much of a central character this time around, much to a lot of critics dismay. Instead it felt more like we followed more closely to the exploits of Dr. Loomis as he and the town sheriff are scouring the town for Michael Myers, who he is positive is still alive and roaming the streets of Haddonfield. This is also somewhat of a turning point for the character of Dr. Loomis. In the first film, you can kind of see his irrational and unbalanced side slightly start to creep out bit by bit, but here it's on full display. The fact that the sheriff continues to allow him to carry a gun is mind-boggling, especially after a particular shocking incident halfway through the film. You'll know what I'm talking about if you've already seen it. Generally characterized as one crazy son of a bitch, this is probably the first time that theory is the most evident.

I'm sure others have noticed, but it's so strange how different Michael Myers looks from film to film. I mean, it's a guy in a jumpsuit and a Captain Kirk mask painted white, yet each time it's such a different take on the character simply by design. Dick Warlock dons the mask and jumpsuit this time around, and it's painfully evident how much shorter he is compared to Nick Castle, who played Myers in the first film. And though apparently it's the same exact mask from the first film, Warlock being a stockier individual than Castle fills it out a little more, giving it a different look. Honestly I assumed it was a different mask altogether, but it seems Warlock just has a thicker head.

Much like the first film, it's a simple yet effective premise. Myers is on the prowl looking for his sister
Laurie killing anyone in his path. But instead of rehashing the same old thing, they moved the location to the hospital, which gives it an edge and making it a little more claustrophobic. It's interesting. They never explain how Myers knows Laurie is his sister, because she doesn't know he's her brother until Loomis tells her. Unless I missed something. Either way, the setting of the hospital completely wins me over with this one. Throw in Rick Rosenthal's slick visuals and some pretty stellar kills and this is without a doubt one of the BEST entries in this long series entire run.

How to see it:
There have been a ton of releases of this particular film in the last 30 + years. However, there are only 2 that are worth mentioning. First off there's Universal's 30th Anniversary Edition blu ray from 2011. I picked this one up at Best Buy recently for just $7. Decent transfer with a small amount of extras like an alternate ending, deleted scenes and the 1984 documentary "Terror in the Aisles". If you had HBO in the mid 80's, then you've certainly seen it already. Your best bang for your buck though would be Scream Factory's excellent Collector's Edition which not only comes with a great transfer but with a horde of Special Features making this one worth every single penny. Here's what you get:
- Theatrical Cut and Television Cut with footage not seen in the theatrical version
- Audio Commentary with director Rick Rosenthal and actor Leo Rossi
- Audio Commentary with stunt coordinator/actor Dick Warlock
- The Nightmare Isn't Over: The Making of Halloween II
- Horror's Hollowed Grounds: The Locations of Halloween II
- Deleted Scenes
- Alternate Ending
- Theatrical Trailer
- TV & Radio Spots
- Still Gallery
Posted by robotGEEK at 9:48 PM