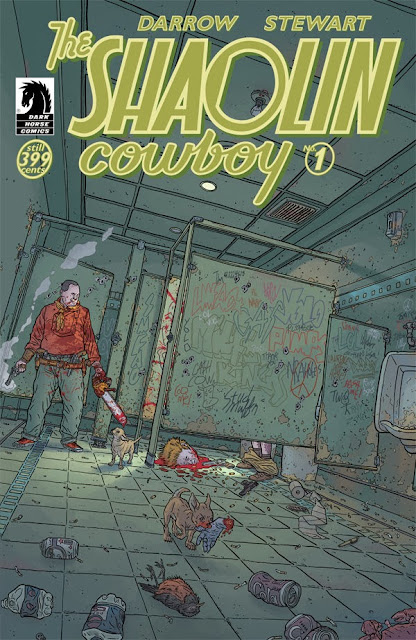 For those of you who are unaware of this title, whether you're a comic book geek or not, I thought I'd give you a little bit of info on this gnarly title currently out on issue # 3 by Dark Horse Comics.

Shaolin Cowboy was first introduced back in 2004 in a 7 issue bi-monthly limited run by The Wachowski's (The Matrix, Cloud Atlas) own comic book company Burleyman Entertainment. Written, Drawn and Created by legendary comic book artist Geof Darrow (Hard Boiled, Big Guy and Rusty the Boy Robot), Shaolin Cowboy quickly found cult status and currently, that original 7 issue run commands top dollar online. So it's because of this and the fact that it was never released in trade paperback form that I never got to read it. This year, however, Darrow and Dark Horse Comics teamed up to bring The Shaolin Cowboy back to life in a new series to be written, drawn and created by Geof Darrow once again. Though I'm unsure of whether it's a limited or ongoing series.

With issue 3 hitting shelves this week (I have yet to pick my issue up), I can tell you that just from the first 2 issues alone, this is a must have. Insanely gory and drawn with razor sharp precision to detail, Geof Darrow's hyper-violent exploits of the Shaolin Cowboy is one of my favorite comics out now.

As I never read the original 7-part series back in '04, the new series from Dark Horse kind of throws you head first into the action without giving you any backstory. If you take the time to read the extremely long prologue at the beginning of the first issue, you might be somewhat caught up to speed, but I also found it slightly confusing. So I'm hoping that as the series progresses, more and more will be answered. But for now, issue 1 was massively entertaining and exactly what I was hoping for with this title. Issue 2 was interesting. It was just basically one long fight between the Shaolin Cowboy and a horde of zombies as he hacks each one to pieces with his staff that has a chainsaw attached to each end. Awesome stuff.

I've been a die hard comic book collector since the mid 80's. As life happens, my collecting has been on and off for the last 20 years or so. Currently I've gotten back into it, but only slightly, limiting myself to just a few titles. It can be an expensive hobby. But it's titles like this that keep me sticking around.
Posted by robotGEEK at 10:27 AM