Review: Out for Justice 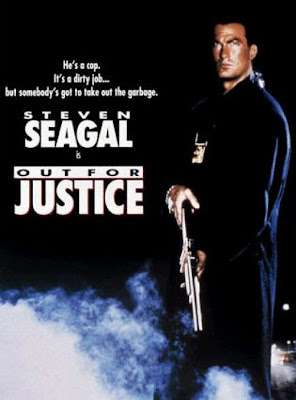 Released in 1991, a year after the excellent Marked for Death and directed by the guy responsible for Rolling Thunder, Best Seller and Lock Up, Out for Justice represents another solid entry in Seagal's early filmography when pretty much every film he made was a bonafide action hit. Those were the days weren't they? When year after year Seagal and Van Damme were going head to head for the top spot recently vacated by Chuck Norris.

A man is shot to death in broad daylight in front of his wife, son and countless witnesses. Det. Gino Felino (Seagal) gets the call and discovers that it's his friend and fellow cop Bobby. Gino also discovers that the killer was another old friend from the neighborhood and gangster wannabe Richie (William Forsythe).  Gino soon uncovers a complex plot full of dirty cops, mob ties, and a man on the edge with nothing to lose and nobody to stop him. When Richie's murderous rampage continues throughout the city in one long and deadly night, it's up to Gino to hunt him down and stop him at any cost.

Out for Justice, while thoroughly entertaining, didn't "wow" me like Above the Law (1988) or Marked for Death(1990) did, and I think a lot of that has to do with the script by David Lee Henry (Roadhouse). As far as structure goes, it was fine-lots of action, fights, violence and a subplot involving Gino and his impending divorce from his estranged wife, but there seemed to be so many unnecessary scenes of dialogue that just serve no purpose and quite frequently make absolutely no sense. So as it's set in the Italian community of Brooklyn, you have all these head honchos from all these different mafia families who feel the need to deliver speech after speech about respect and loyalty and all that, but they throw these scenes in frequently and outta nowhere that they ultimately slow the film down when for the most part, they are unnecessary. I counted at least 5 different sequences like this and when they were over, they accomplished nothing. But the topper was when Seagal's character Gino delivers his own speech, or rather a story, to some mob guy from the neighborhood about when he was a kid and looked up to this older father figure guy and yadda yadda yadda. It was so long and when it was all over, it had absolutely nothing to do with the story and I was thinking to myself "What the hell was that?". Mainly because that scene went on for far too long and seemed kinda ridiculous when he's supposed to be out looking for this psycho killer, yet he's got the time to stop and tell stories of growing up in Brooklyn.

But that's really a minor complaint because all in all, it's a really great and well made action thriller. Director John Flynn gives the film an authentic gritty 80's style atmosphere that never goes out of it's way to be stylish. He keeps the camera still and that's one of the films greatest assets. Realism is thrown out the window in favor of the outlandish, but it's an action film, so what do you expect? It's hard not to hit on that aspect because watching Gino roam the city in search of Richie as he literally sends dozens and dozens of people to the hospital or the morgue is pretty fucking amazing. And the fact that he's able to get away with it without any consequences being that he's a cop on the clock only adds to the films charm. Seagal doesn't always pull off the Brooklyn accent all that well, half the time it feels forced, but who really cares. You want to see him bust some heads and kick some ass and he does that aplenty here. Out for Justice displays some pretty straight forward action sequences like car chases, shootouts and some pretty badass fight sequences. A fight scene in a bar where Gino (Seagal) goes toe to toe with an Asian baddie, each with a pool stick in each hand, is a standout. The beauty of all of these fight sequences, save for the last one with Richie, is that it's always Gino up against a large group of guys, never one on one. Seeing how he can put a guy down with the simplest of movies is always awesome to see.

Besides Seagal we have William Forsythe as Richie, a guy who appears to be planning something big and with a death wish. Forsythe has made a career out of playing villains and this is no exception. Except in Out for Justice he's so over the top and just plain ridiculous sometimes that he ends up coming off more like a buffoon than a scary gangster. Especially when it comes down to the fight with Gino at the end. Let's just say that for all his tough guy talk, he hits like a girl. And when it was all over, I wasn't satisfied with the "why" he goes on this murderous rampage. Yea there's an explanation, but it's not the explanation I was expecting and logically, made no sense. Especially since for the most part you think he's planning something huge for the end as he keeps promising, only to be let down once you realize what the real motive was for his insane behavior.

Not as awesome as Above the Law or Marked for Death, but one helluva ride nonetheless.

On a side note, I saw an interview with John Leguizamo when he was on Live with Regis and Kelly a few days ago where they asked him various questions about his illustrious career. They asked him about working with Steven Seagal on Executive Decision and he did not hesitate or mince words on how much of an asshole Seagal is in person. He does a great Seagal impression by the way, but talked about how when he met him for the first time on set he tried joking with him to lighten the mood since both of there characters are supposed to be buddy buddies in the film. He said Seagal grabbed him, shoved him up against the wall and basically said "he" was the head honcho there and basically saying "you ain't shit". After hilariously bashing Seagal, he ended the interview with saying Seagal ran like a girl. I just thought it was hilarious.
Posted by robotGEEK at 6:19 PM