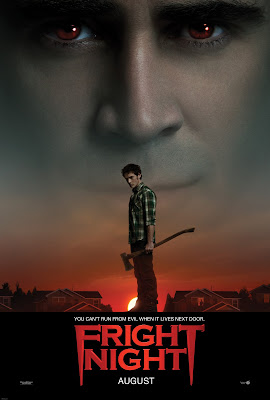 Yet another perfect example of another needless Hollywood remake. A few recent others that come to mind, A Nightmare on Elm Street, The Thing and Conan. Though I still haven't seen Conan yet, so I can't say whether it was good or not, but judging purely on it's lackluster box office performance it would be safe in assuming it's not the Conan film we had hoped for. But I can certainly say this falls right into the category of "needless" along with The Thing prequel/sequel/remake thingy and Samuel Bayer's Nightmare on Elm Street remake.

There just didn't seem to be any point with this one. It offered nothing new, inventive or creative to the story that would warrant a remake. That's not to say that the actors weren't good, because they were fine. Colin Farrell is about as cool and hip as he's ever been. Anton Yelchin did a decent job as the semi nerdy Charlie and Christopher Mintze-Plasse as Charlie's "former" friend Evil Ed was inspired casting. But everything just felt so forced. Like there "had" to be a remake and this was the best they could do. And while they made some pretty big changes to the story and even the characters, it didn't make up for the fact that there was just no need, especially since the original Fright Night circa 1985 is still a shining example of a great horror/comedy hybrid complete with regular looking actors who come off as believable and not like they came out of some reality show, a hypnotic, moody and 26 years later, recognizable score, impressive practical effects and a capable director with a flare for fleshing out a story and it's characters.

The thing about this remake is that it's not horrible, it's just alright. And if it's just going to be alright, why bother when you're tackling such a well known cult classic? It just doesn't make any sense to me. They tried sprucing it up by updating a few things like Peter Vincent's character most notably. Instead of a suave television host, he's now a much younger Criss Angel wannabe magician doing elaborate shows in Las Vegas. He's an alcoholic, a fake and a pretty big douche bag. I didn't like that change. I think one of the things that made the original so great is that you really like and care for  Roddy McDowell's Peter Vincent. You just can't help but love the guy. The effects here were also kinda lame. A "lot" of unnecessary digital blood and it's just so painfully obvious in at least 4 scenes that they were forced to do some kind of 3D gimmickry with shit being flung towards the camera. I don't remember if this was released in 3D or not, but with those scenes it sure felt like it did. I don't know, it just seemed like a wasted effort from a director not capable of handling such a big film. All it does is just make you want to watch the original again. 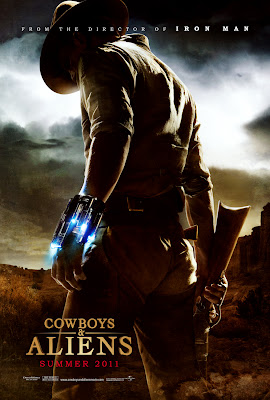 This had some pretty awesome ingredients. Mix a western with an alien invasion story, have the director of Iron Man helm the sucker and bring in Indiana Jones and 007 for good measure. For all intents and purposes, it should have worked, and I just can't put my finger on why it didn't. It's not bad by any means. In fact, with some pretty outstanding special effects and badass leads it definitely has it's moments. But it doesn't "wow" you like it should've. There were never any "Holy Shit!" moments and Favreau, while usually at the top of his game, didn't impress me this time around. He made a few creative choices that just didn't work for me and seemed to revert to handheld a little more than usual.

The effects were top notch, and I enjoyed seeing some familiar faces like Keith Carradine and Clancy Brown doing some nice work, but it just didn't seem as spectacular as it should have been. Maybe it has something to do with the fact that it credits 5 screenwriters? With so many people working on one script, that's never a good thing. Though the action scenes were pretty cool, overall it didn't have the visual flare I would come to expect from a Jon Favreau flick. The guy impressed me with the severely underrated Zathura, and blew me away with the first Iron Man. But when part 2 came around, it suffered the same problems as Spider-man 3-too many villains. But unfortunately he doesn't redeem himself here. Another problem I had with it and with sci-fi films in general these days is that I just don't like the way they're designing aliens anymore. Attack the Block is an exception, but for the most part like here and in Super 8 for example, I just don't dig the design of them. Fully CGI'd and way too complicated. Most of the time you can't even tell what they look like because they just look so weird. It was cool and had it's moments with some cool action, but it not enough of them to be able to call this awesome.
Posted by robotGEEK at 10:17 PM