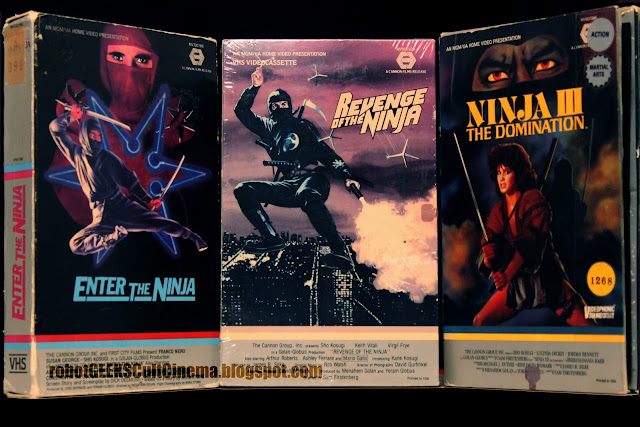 The cycle is complete.
After I had seen Revenge of the Ninja for the very first time, I was floored by how completely ridiculous it was. But it had me hooked. It was a fun kind of ridiculous and with Sho Kosugi front and center, it was just a brilliant combination. But then I saw Ninja III: The Domination, the unofficial third entry in the series, and just couldn't believe what I was seeing. Next to Never Too Young To Die, it has got to be one of the biggest "WTF?" movies I've ever seen. I mean, it was just gloriously bugnuts insane and made absolutely no sense whatsoever, but I loved it! So I just "had" to own these films in there original VHS release. Not that I'd ever watch them because I already own them on DVD, but just for collecting's sake.
I didn't make it a daily habit, but I'd occasionally search for them on eBay whenever I would remember. They are often available in there original big box format from Cannon Films from various eBay sellers, but they always ask too much. I have a rule of not ever paying more than $10 for a VHS. It's just a personal thing because if I don't give myself a limit, I could easily go crazy. And I've passed up some pretty  badass stuff because of my stupid rule. But I knew if I waited long enough and was patient, I'd come across another fairly cheap. As luck would have it I indeed found a copy of both Revenge of the Ninja and Ninja III roughly about the same time for fairly cheap and put my bids in. I lost, of course, but 1 day later the seller, who I had no idea was the seller of both of them, contacted me with a "second chance offer" for both of them. I guess whoever outbid me on them reneged on his or her bid and bowed out. So I got them after all at an awesome price. Revenge of the Ninja amazingly is still sealed. The cover and spine are slightly faded, but it's still in it's original shrink wrap. Sweet! And Ninja III is in very good condition, only having some minor scuffs and shelf wear at the top and bottom. Then soon after that I happened upon Enter the Ninja purely by accident as I was casually browsing one day. I had no intention of ever looking for it since I've never seen it, and the seller used a "stock" photo instead of taking an actual photo of the VHS, but I though "what the hell" and put my $1 bid in anyway. I won and when I received it I was surprised to see that it was the original big box Cannon release.
This is such an interesting trilogy. They have nothing to do with one another other than the fact they all have Sho Kosugi in them, only as a different character in each one. In Enter the Ninja he's a supporting player. In Revenge of the Ninja, he's front and center as the star. In Ninja III: The Domination he's back to being a supporting player, but steals the show in every single scene he's in. One things for sure, we definitely need more ninja films.
Posted by robotGEEK at 9:49 AM