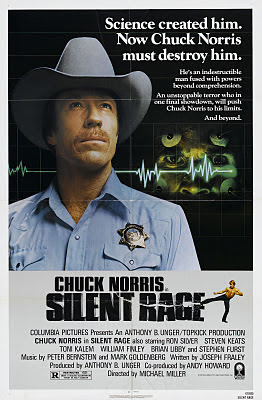 I must confess, this one left me a little underwhelmed. Not to say that all the ingredients weren't there, but I think it was in the execution by director Michael Miller where this thing really falls short.

I've had this in my DVD collection for years now, always meaning to pop it in and give it a spin, but always forgetting that I have it. I know I've seen this before, but it was literally some 20 odd years ago at least so my memory of anything related to this film are virtually nonexistent. But it sounds cool. Chuck Norris as a Texas sheriff hunting down an unstoppable killer with his trusty and goofy sidekick circa 1982? Sounds like a winner to me!

I'm not going to bother with a synopsis this time out because I just basically gave you the jist of the story. I mean, I couldn't really elaborate on that in synopsis form since annoyingly not much is really explained in the film. Stuff just happens and you just have to accept it. Instead I'll go more for a play by play on what works and what doesn't and hope it doesn't come out too long.

Silent Rage works on some levels, but then fails miserably on most of them. What you should know first before going in is that this is "not" an action film, rather it's more of a thriller with hints of a slasher film here and there. And it's when the film is hitting on these slasher film themes that it really kinda tanks. Firstly because whenever the killer is going around killing people, director Michael Miller converts to full blown hand held POV camera work a la Halloween. Fitting since Halloween II had just come out the year before. I don't know, to me it was a lame copout technique and completely shifts the tone of the film from a Chuck Norris film to a slasher film wannabe. I mean, the killer is even wearing a jumpsuit! The only thing that's missing is a mask. It only makes it painfully clear this guy has no business directing big budget features.
When the story is not focused on the killer and using the POV camera work, then it resembles a pretty standard and straight forward thriller, only this time it's got the man, the myth, the legend..... Chuck Norris.

The film starts with John Kirby (Brian Libby) having sort of a meltdown in his rented room in a house full of screaming kids and an equally loud mother. He receives a phone call and he tells the person on the other end of the line that he's "losing" it and doesn't know how much more he can take. Right away you get he has mental problems and he's probably talking to his psychiatrist because he looks like he's about to flip out, sweating profusely and trying to take some pills that he proceeds to drop on the floor. In a split second.............he snaps. He walks to the back yard and picks up an ax and kills the mother of the house for no reason. The mailman, seeing the woman scream for her life through a window, calls the cops and enter Texas sheriff Dan Stevens (Norris) and his clumsy partner Charlie (Stephen Furst). Long story short, John is killed with a barrage of shotgun blasts after a struggle with police "after" Stevens had already subdued him and put him in the back of a squad car. So it's here we are shown that this guy somehow possesses some kind of superhuman strength. So that's a pretty promising start. Not spectacular or anything, if only it had been filmed better. Director Miller uses long tracking shots with a hand held camera that offers nothing other than the conclusion that the guy doesn't know what the hell he's doing. Bad camera angles, bad choreography and bad steadicam work leaves a lot to be desired and sort of blows such a powerful opening from a film.

Thankfully, when the rest of the film isn't focused on the killer, it actually looks a little better - no bullshit and lazy steadicam work. Unfortunately this is also what hurts Silent Rage because a good half of the film is not even focused on the killer or who he was or how he became the "silent rage", but instead on Sheriff Stevens trying to woo his old girlfriend back, who also happens to be the sister of the killer's former psychiatrist (Ron Silver), who in turn also happens to work with a mad scientist named Dr. Spires (Steven Keats) who has invented a new rejuvenating drug that can rapidly heal the body of any type of injury in a matter of minutes (It's really not as complicated as I make it out to be). Only problem is that it's never been tested on a human. And that's where John Kirby comes in. Since he was able to somehow display this remarkable strength by taking all these shotgun blasts to the body and still keep going, Dr. Spires think he's the perfect candidate for the drug since he's dead anyway, much to Dr. Halman's (Ron Silver) objections. What could it hurt? Little do they know that while the drug does in fact help the body to rapidly heal physically, it also turns your brain to mush and for some reason into an unstoppable killing machine. Why? I don't know. They never explain why of all things a person would turn to murder and why he specifically targets certain people before ultimately just killing everyone in site.
Silent Rage plays heavily on the Frankenstein theme, for better or worse and they never explain anything, other than they gave a dead crazy guy drugs that brought him back to life and just made him even more crazy.

The good? The cast is really the only thing Silent Rage has going for it. Ron Silver was a treat to watch playing a moody, yet morally competent psychiatrist/doctor who knows right from wrong and wanted nothing to do with the experiment. Stephen Furst was kind of an odd choice as Norris's partner, but he does add a few chuckles to the story. Toni Kalem as Norris's impossibly cute ex and sister to Dr. Halman stands her own with the big guys. Chuck Norris is Chuck Norris. A complete badass. Need I say more? He's so cool and collected the entire time, even when he's walking into a crime scene with the crazy guy still inside and not knowing what the hell he's up against. Or when he's trying to woo his ex with long and pointless sequences of make-out sessions with her. There is a scene though, when the killer has just killed his partner, and he slowly stands up after having been on the floor with his faithful partner Charlie before he died. He. Looks. Pissed. Classic!

I think it's funny that they have a shot of Norris on all the different movie posters of him doing a kick when there's virtually no martial arts action going on in the entire film. I counted 2 scenes in the whole film where he uses a "little", but that's it. A big fight scene in a bar where he single-handedly takes out an entire bar full of biker thugs and the big fight with the killer at the end. What's even funnier is that on any of the trailers and tv spots, they mostly use footage of both the bar fight and the final fight with the killer; the two scenes where there is actual fighting and they hardly use any footage of anything else from the film. The bar fight was kinda cool, but the big fight at the end was ............ lame. It's mostly just a lot of wrestling and tumbling with the guy, with "no" music and really badly filmed where they litreally use the same closeup shots of Norris and the killer over and over and over again intercut between there tumbling bouts.

This is not your standard Chuck Norris stuff, especially considering this came out smack in the middle of a pretty solid point in his career with films like The Octagon, An Eye For An Eye, Forced Vengeance, Lone Wolf Mcuade and Missing in Action. He was trying something different, and it woulda worked if Silent Rage had a better and more qualified director. Feature films is not this guy's forte; no doubt since all he's ever done since this is television work. Give it a shot if you dare. You've been forewarned.
Posted by robotGEEK at 5:07 PM