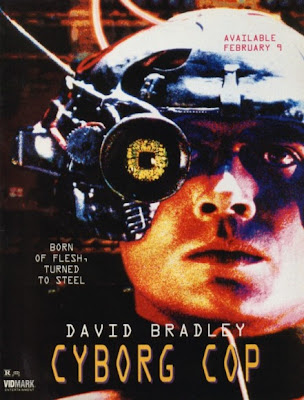 When I sat down to watch this one, I had no idea what I was in for. I knew nothing of the plot or who the filmmakers were. The title sounded cool and with the name Cyborg Cop, my first thoughts were that this was going to be another Robocop ripoff, much like the awful R.O.T.O.R., but it appears that I was completely wrong. While I was expecting a tale of a dead cop turned into a cyborg roaming the streets of the city, instead I was treated to a film that primarily takes place in a small Caribbean island. As a result, Cyborg Cop ends up playing out like an Exploitation or Trash film more than anything, and that's all due to the talents of it's director, Sam Firstenberg. It wasn't until the opening credits started rolling that I was aware Firstenberg was even behind this. So right away I knew I was in for something special. You see, while I haven't seen everything director Sam Firstenberg has done, he is responsible for a few of my most favorite "WTF?" films of all time, Revenge of the Ninja and Ninja III: The Domination namely. He also did Breakin' 2: Electric Boogaloo and a slew of others like American Ninja and Avenging Force. So let's just say I was a little excited to see his name attached to this.

Jack and Philip Ryan are two brothers who also happen to be DEA agents. When a bust goes sour and Jack (David Bradley) kills a suspect before backup arrives, they are forced to resign and go into seclusion. One day Philip tells Jack of a secret job he's about to do in the Caribbean and needs Jack to look after his son while he's gone, sure to be back soon. When Phillip disappears after sending Jack a secret message, Jack goes to the Caribbean looking for his missing brother and discovers he's been turned into a cyborg by a mad scientist who uses these cyborgs for his drug running business.


I wish I could say that Cyborg Cop was a blast because it certainly had all the necessary ingredients to pull of an awesome low-budget sci-fi trash flick, but ultimately it just didn't work as well as it could have. It had it's moments, like a strong opening, a John Rhys-Davies doing some insane overacting and star David Bradley seriously rocking a fanny pack. But right at the half way mark the film starts to go down hill. Too many scenes of Rhys-Davies belting out speeches about who knows what, a love/hate relationship between Bradley's character and a reporter along for the ride that just doesn't work, and a truly and utterly horrible final act that suffers from probably some of the worst editing I've seen in a very long while.

Cyborg Cop ultimately left me scratching my head most of the time. Like the cover for instance. That image on the cover is neither of star David Bradley's character nor his brother, who actually gets turned into a cyborg. Instead it's of a small supporting character who doesn't utter a single word and is simply known as cyborg. And what about the title? Why is it called Cyborg Cop when the two brothers aren't even cops anymore and the one who does get turned into a cyborg isn't even the star? Why does David Bradley wear a black leather jacket when it's clearly 120 degrees outside? In the final action sequence when Jack infiltrates the drug runner's compound, why is he able to just throw the homemade bombs and have them explode when just a few minutes earlier he clearly had to physically light them with a lighter for them to detonate?
And don't even get me started on the weird relationship between Jack Ryan and the female reporter Cathy. Obviously meant to be played for laughs, it just comes off as forced and more than anything, really uncomfortable. Like, you know he's gonna bed the chick, but they make you sit through endless back and forth flirting and annoying angry banter when they should be focusing more on some action sequences.

Which brings me to my final complaint. I don't know what the hell happened, but everything about that final action sequence felt off, like an amateur was editing his first film. Scenes were cut in half, right down to the sound effects. Like it was an edited version of Cyborg Cop or something because it was too violent, only it wasn't. Some of the punches and kicks that were thrown and landed in a fight sequence didn't even have sound effects! And don't get me started on the inability of the filmmakers to simply count correctly when editing a sequence where a guy shoots at two different people, yet somehow three go down. The list goes on and on. But it's just the overall execution of the action sequences and fight scenes in general that were just bad. Such a bummer considering director Firstenberg is responsible for some pretty great low-budget 80's gems. The frustrating thing is that you can overlook a lot of this if the film just didn't lag for so long in the middle when it focused on the needless love story of Jack Ryan and the reporter or when Rhys-Davies scenes seemed to go on forever and ever as he belted out speech after speech about nothing. For a low-budget sci-fi film called Cyborg Cop, it needed a helluva lot more action, even if it was bad action.

The good? David Bradley certainly gives it his all. He's really trying with the material he's got to work with. Why he wears a fanny pack with a black biker jacket is beyond me. It does offer some cool low-budget action and a few "so bad it's good" sequences of science fiction and gore. But they're few and far between and once it gets to that final action set piece when Jack infiltrates the compound, well it's just so laughably gawd awful you wonder what the hell they were thinking when it's all over.
Posted by robotGEEK at 7:47 PM