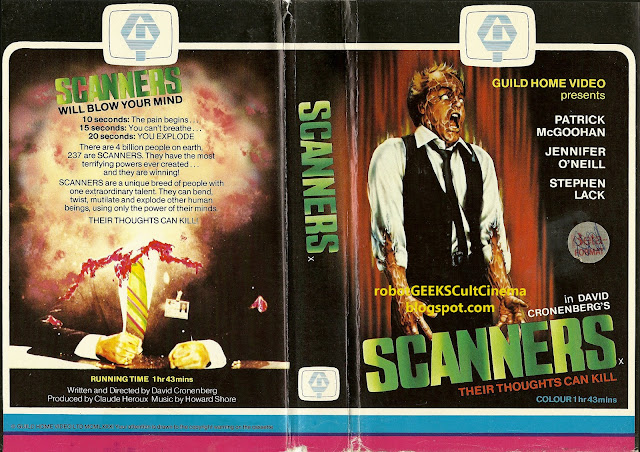 Scanners is a film that I've shockingly never seen. It's just one of those things, like I've seen bits and pieces here and there and everyone knows that exploding head sequence, but somehow always passed me by until I made a conscious decision to make it happen. Even then, it took me about 4 times to get through it because right now, I'm just so busy with work and sitting through an entire film from beginning to end without interuption is just impossible.  I will say this though, I had high expectations because 1. It's from David Cronenberg and 2. It's about superhumans with telekinetic powers that can literally make your head explode. Also, the year it was made get's me excited and that VHS cover........is that not the coolest cover or what?!

Despite a multitude of flaws, I actually enjoyed this. It didn't end up being the film I was hoping for or what the VHS cover and trailers implied, but because of the sheer talent of Cronenberg's brand of storytelling, I was able to look past most of the issues I had with it and enjoy it nonetheless. First off, it's circa 1981 and I don't know, movies just looked cool back then. The clothes, the design, the setting and just the way films were made in general back then all come together so wonderfully here. It's the same feeling I had when I saw Nighthawks not too long ago. The feeling of "they just don't make films like this anymore". In this day and age of quick edit shaky cam bullshit something like this is refreshing. The practical effects in here are phenomenal. I mean, that exploding head sequence that this is so famous for is worth the price of admission alone. Even when watched frame by frame (yea, I'm sick that way), it's amazing how well it looks and how real too; It's that good. While some of the cast is not great in this, there are some pretty impressive performances to be had, namely Michael Ironside and Patrick McGoohan. And I love the concept. The idea of superhumans born with this telekinetic power where they can control minds and inflict harm on there victims is just awesome to me. Although I was kind of expecting full on telekinetic battles like in Dark City, I was sadly disappointed until the final showdown between Vale (Lack) and Revok (Michael Ironside). It wasn't the badass ending I was hoping for, but it did redeem itself quite a bit with this final showdown and some of the plot (albeit cheesy) twists.

Now onto the bad. Stephen Lack, who plays the lead in the film Cameron Vale. Oh my lord, this guy cannot act. Stiff or wooden wouldn't even be the word because it's not even that. The guy just cannot act and it's painfully obvious in his delivery of every single line of dialogue. I don't know how he got this job or why Cronenberg thought a relative unknown could pull off a lead like this, but it just didn't work. On the plus side though, the guy looks good when he's "scanning" somebody. He pulls off the body language really well, complete with the facial expressions and deadpan eyes because let's be honest, not a lot of people would be able to pull off something like that without looking ridiculous. So while the guy can't act, he looks good where it counts; the scanning sequences. Which brings up another issue I had with the film. That exploding head sequence sells the picture, no doubt. Only problem is that it's the "only" exploding head sequence in the entire film and since they give you that incredible sequence pretty much in the beginning of the film, you're left waiting and waiting for more exploding head action and it never comes, not even close. You just feel kind of cheated and misled. Like they tease you with this great piece of awesome gore, but that's it. They never even attempt to compete with that scene later on. Some other issues would be that it's painfully slow at times, and some scenes just don't make sense. Like when Vale (Stephen Lack) uses his "scanning" abilities through a telephone?! Come on! He just barely got a grasp of this whole "scanning" thing and all of a sudden he's confident enough to know that he can "scan" through a telephone? I'm sorry, but that just doesn't jive with me.

Cameron Vale (Stephen Lack) is a homeless man who uses telekinetic powers to harm people. When a Doctor (Patrick McGoohan) learns of his existence, he takes him in to help him properly develop and control his powers. Vale soon realizes that he's not the only scanner and that someone is killing them off one by one. With the help of Doctor Ruth and his underground organization, they seek to find the most powerful scanner out there, Darryl Revok (Michael Ironside) who they feel is responsible for the killing off of the rest of the scanners and end his reign of terror.


Michael Ironside really shines here. When given the right material, he can scare the crap out of you with his intense and often times explosive performance. Patrick McGoohan is also pretty great as well. There's just something about his voice that almost hypnotizes you. I sense an accent in there somewhere, but can't quite place it.

I think most people's gripes with this would be that it's slow. And indeed it is, sometimes dreadfully so. But Cronenberg intercuts the slow parts (I wouldn't call it boring) with some insane violence outta nowhere and with a really great visual style that takes full advantage of the cold and depressing environment. Towards the end of the story, computers play a big part of the story and it's fascinating to see these monstrous computer dinosaurs in there infancy. I get such a kick out of that stuff. Even more so when Cronenberg incorporates this into the end credits. Genius stuff and I have to admit I geeked out a little with that credit sequence.

Scanners, for the most part, is a slow burn kinda film and after an awesome display of practical effects in the beginning, it unfortunately doesn't pay off when you're expecting a full on "scanner" battle by the end, though the final showdown is pretty sweet. Cronenberg, according to IMDB, states that this film was a frustrating experience and that the production was severely rushed. Basically writing the script as they were filming, which would explain a lot about it's shortcomings. Given the time to develop a proper script, Scanners could have been something pretty incredible. But the idea of it still fascinates me and though it has some weak parts, I still found it thoroughly enjoyable. I've really been wanting to see this one for a very long time and in all honesty, it could have turned out a whole lot worse. It mostly worked for me and in my opinion, the good far outweigh the bad with this one.
Posted by robotGEEK at 1:42 PM