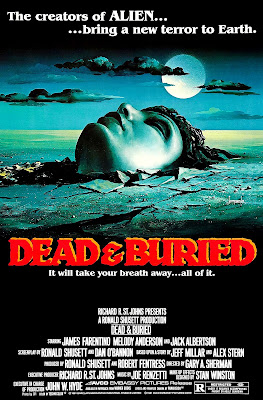 Dead & Buried is a film with a lot of talent behind the camera for a little seen or heard of early 80's horror film.

The main thing this film has going for it is it's constant sense of dread. The film carries an eerie atmospheric tone that reminded me a lot of John Carpenters The Fog, only not as awesome and not as visually stunning. In a lot of instances it reminded me of a made for TV movie. For a horror film from 1981, that's not always a good thing.

Potters Bluff, Rhode Island. A small seaside town where everybody knows everybody and nothing exciting ever happens until tourists start getting killed off in gory fashion at an alarming rate. Sheriff Dan Gillis, the college graduate who came back home to become the town sheriff, is at a loss. He thinks there is a serial killer responsible until clues lead him to believe there might be more to this close knit town, his wife and the local mortician included, than he ever imagined.


I'd heard of this film once or twice before and finally made it a point to check it out the other day. For me, it was the talent involved behind the camera that pulled me in. I've always been a fan of both Ronald Shusset and Dan O'Bannon, who between the two of them have given me some of my favorite sci-fi, horror and action films of the 1980's. So a horror film from early in there career written by both of them with special effects by the great Stan Winston should be a sure thing right? Well yes and no. It's not so much a full on horror film as it is an atmospheric thriller with some pretty impressive effects. So going into this thing expecting a horror film and ending up with a suspense thriller that looks like it was made for television kinda left me a little bummed when it was all over. It just didn't end up being the kind of film I was hoping for. I can't really pinpoint one specific thing that felt off, because the performances and the direction were fine, but somehow it just didn't gel very well. Like it didn't know what type of film it wanted to be. At one point it felt like a Twilight Zone episode, and at another it felt like a Fog wannabe. The shifting tone really threw me off and if it wasn't for the creative and pretty awesome kills here and there as well as Jack Albertson's (in his final role) role as the local mortician with the entire town under his spell, then I woulda been bored out of my mind.

It did have a few bright spots though. The main actor who plays the sheriff, James Farentino, was pretty great. The guy was just so gung ho the entire time and gave it his all, even with some of the ridiculous scenarios. And I swear, I seriously thought it was the actor who played the dad in The Wonder Years, only younger and thinner. I'm telling you, the guy's a dead ringer. Also great was Jack Albertson, Charlie's grandfather from Charlie and the Chocolate Factory. He really steals the show and it was so great to see that he ended up having a much bigger part towards the end than you realize in the first half. It also had some pretty nifty special effects courtesy of Mr. Winston. The only problem was they just seemed so out of place in a movie like this. Like, the killings were so severe, but then the film turns back into a slow Twilight Zone episode or an Alfred Hitchcock presents episode and after you cringe at the painful death, you sort of scratch your head thinking it seemed so over the top compared to the rest of the film.
I would also have to say the big twist at the end was awesome. I'm talking about the very last scene right before it cuts to credits. I honestly never saw it coming and was pretty impressed with how inventive it was. Overall though, Nothing really stood out here that will ever make me watch it again unfortunately. It was a nice effort and if anything, it really makes me want to see John Carpenter's The Fog again, another horror film that came out the year before about another small seaside town dealing with mysterious murders, only made much better and worked much more effectively by a master in the beginning of his prime.
Posted by robotGEEK at 8:53 PM